Hi Marcin...if you were to drink lemon juice in its raw form then it would have to be neutralized by the pancreatic juices first in the duodenum before it was properly absorbed into the body as citrate(the safer and more alkaline chemical salt form).

So citrate may simply be thought of as the post-digested form of citric acid. The point to take away here is that drinking the raw lemon juice containing the citric acid needs to first be digested and neutralized to citrate form before digestion and absorbtion into the blood. But the bicarbonates stored in the pancreas are also crucial to help maintain the correct alkaline body pH in other parts of the body. So if you take the raw lemon juice then you are effectively wasting the body's bicarbonate stores(which could be used elsewhere in the body to aid other metabolic processes) in the pancreas and reducing them.

So that's why it's far better to take the post-digested form of lemon juice(as citrate) by adding water and sodium bicarbonate(baking soda) to the raw lemon juice and then drinking it this way. This form does not need to be converted to citrate -- it is already in the post-digested citrate form -- and will be easily absorbed into the blood without depleting the crucial bicarbonate stores in the pancreas.

And apart from the above reasons, if you drink raw acidic lemon juice or vinegar then the acids in them will tend to erode and dissolve the enamel on your teeth over the longer term. That's yet another reason why it's better to supplement the more alkaline citrate or post-digested form of lemon juice using sodium bicarbonate.

Regarding your UTI and back problems, these are probably being caused by excess cell and blood acidity caused by the candida and other poisons being released in your body. This acidity can cause damage to the fine filtration network in the kidneys which might be causing your back problems. And if your kidneys are not up scratch then fungal/bacterial infections will get through to infect the bladder causing the UTI problems. That's why its important that you should be taking the lemon in water mixed baking soda -- this will help to alkalize the cells and should help to reduce the pain. Take this outside mealtimes twice a day and also take 1/2 teaspoon baking soda on its own with water at about 9:00 pm before you sleep. Both these protocols will help to make your body more alkaline and should help you. For the back problem you might also want to try using a tablespoon of VCO mixed with about six drops of lavender oil or tea tree oil or clove oil for some immediate relief. 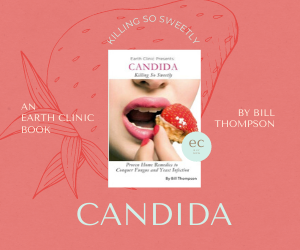