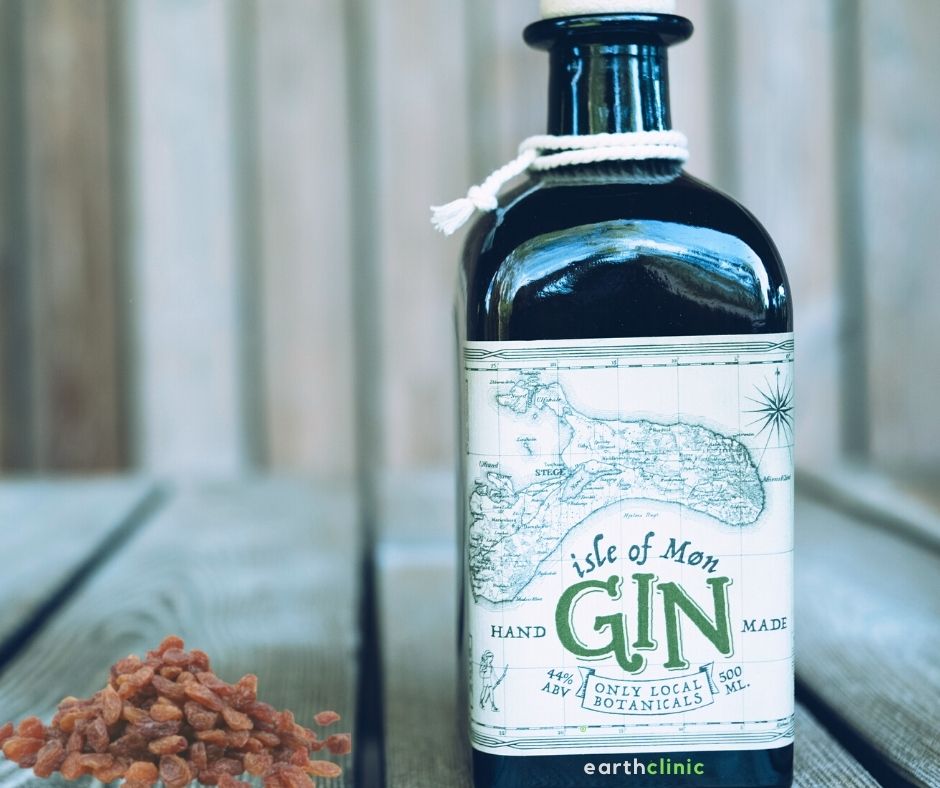 An old-time folk remedy for arthritis that Earth Clinic readers have raved about over the years is raisins soaked in gin. The raisins must be golden raisins, which are made from seedless white-fleshed grapes.

Here is what one Earth Clinic reader had to say about this remedy back in 2008.

Posted by Myra (Montgomery, AL): "Take a box of white raisins; place in a glass container, cover with Gin. Cover with a tight lid. Eat 10 raisins a day. (I put them in my cereal) Keeps pain and swelling from arthritis. When I miss a week, my knees have shooting pain so bad that I have difficulty walking upstairs. Helps shoulder pain and overall over body pain from arthritis. One of my students was in a wheelchair, and after treatment can walk with a cane."

Why Does It Work?

Many theories exist as to why this remedy might work.

Some think it's the sulfur used in the process of making golden raisins. Sulfur-containing supplements like MSM are among the treatments that provide relief to chronic pain and arthritis.

Grapes used to create golden raisins are mechanically dried. They are then exposed to sulfur dioxide (SO2), which retains their gold color and prevents oxidation and caramelization.

Many holistic practitioners believe the juniper berries used in Gin are what make this a potent remedy. When combined with the sulfur in golden raisins, Juniper berries are anti-inflammatory and may account for the reported effectiveness of this home treatment.

What Kind of Gin Should I Use?

Avoid the cheapest gins, which are made with artificial juniper flavoring.

What Kind of Raisins Should I Use?

Only use golden raisins.

How Long Should the Raisins Soak?

Readers disagree on the amount of time that the raisins must soak in the gin. One reader writes that it must be no less than two weeks, while other readers write that soaking raisins for one week works great.

How Long Does It Take to See Results?

Results vary. Some people can feel arthritic pain reduced in a week. Others say it takes up to a month, eating about 9 raisins a day to see results.

Below are several sets of instructions summarized from Earth Clinic reader posts. Pick the one that resonates with you and let us know how it works!

1. Lay raisins flat in a stockpot

Send Us Your Feedback!

Continue reading below for feedback from Earth Clinic readers and let us know if this remedy has ever helped you!

Plenty of recent postings on this Site extolling the virtues of Golden Raisins for Arthritis, so that's really interesting. Many of us Oldies have at least one or more creaking joints etc.!

Luckily, I have perloined the remaining dregs of a family member's London, Dry Gin bottle, carefully hidden away in the pantry. They won't miss it. Does the concoction need to be kept for two weeks in the Fridge?

In the quest to source a small supply of these G.R. at the Bottom of the World (ex. California usually), I stumbled on the following site that makes some pretty strong claims for the health benefits of G.R. WOW!!

Worth checking out - tooth enamel and cavities etc but "Wait there is more" ...the list goes on. One would be wise to check this site out I reckon and see what you think??!!

Just to note that golden raisins are generally called sultanas in the UK.

I have a question about the golden raisin arthritis cure. Does any one know,, do they raisins have to be chewed, or can you swallow them whole? I know it is silly, but raisins are the one thing I just cannot abide. My jaw just about locks when I try to chew them. I would love to try this but I dread eating the raisins. Any ideas?

I would think you can swallow them whole and get the same effect. Please let us know how it goes if you try this remedy!

I put the raisins into my Smoothie.

Hope it well help, I am trying it for the middle finger.

You asked if we have tried the Gin soaked raisins remedy for arthritis. I have not, but back in the 90's my parents used this remedy! They must have seen it on a talk show and thought, "Why not?" They were very faithful with the remedy for quite some time and did find it to be helpful.

At the time, I thought it seemed pretty hokey. But really, it is a raisin tincture. I use tinctures with different plant products all of the time and I use them because they work. The gin is the menstruum and the raisin is the fruit of the plant. I have made an elderberry tincture before. With the elderberry fruit in vodka. I have put chaste berries into vodka to make a tincture. Why not raisins in gin?

Thanks for reminding us of this folk remedy!

I suffered for 9 weeks with arthritis in my hip. It hurt so bad I could hardly walk. I tried everything but nothing worked. X_ray showed arthritis. I found the following on the internet. Place a cup or so of golden raisins in a shallow dish ( I use a glass pie pan.) Pour enough gin over the raisins to cover them. Cover with a paper towel and let set for ten days. Then eat 9 raisins a day. I tried it and in 6 days I noticed a difference. In 10 days my hip had no pain.I didn't limp and hold on to things trying to walk any longer. This healed me. There's a video on the internet where you can learn more about it. They say no one knows why it works, they just know it does. Just Google raisins and gin arthritis remedy and watch the video and read more about it.

Raisins and gin for arthritis: I tried this years ago and it worked really well. I'm in the process of trying this again and thought I would tell everyone about it on Earth Clinic. Buy a box of golden raisins (the raisins must be golden, the regular brown raisins don't work) and lay them flat in a container. I put them in a stock pot. Cover the raisins with gin (yep, the alcohol). You just have to use enough gin to cover the raisins. Let the raisins soak up the alcohol for about two weeks (do not cover the raisin container). When all the alcohol is soaked up by the raisins, you can then put the raisins in a smaller covered jar. It is recommended that you take 9 raisins a day. Goodluck and let me know how you make out.

I'm surprised to not see the remedy of golden raisins soaked in gin for arthritis on this site. I learned of this from my aunt, who has arthritis in her neck (creating headaches) and knees, so her doctor actually told her to try soaking golden (they MUST be golden! ) raisins in any juniper berry gin. I gave some jars to my grandmother with rheumatoid arthritis and to my mother who has osteoarthritis for Christmas this year... it hasn't been long enough to get feedback from them so far, but my aunt swears this has helped her arthritis in her knees and neck.

Pour the gin to a level just above the level of the raisins in your jar.

Soak them for a week, which basically reconstitutes the raisins.

After that week, take anywhere between 5-10 raisins a day, whatever works for you.

Do yourself a favor and get two jars so that you can start your next jar as you start to run out of the first jar, otherwise, you'll have a week of no raisins.

Arthritis has been discovered in one of my knees. The thing that has helped A LOT is golden raisins, soaked in Gin... Take the entire package of raisins, and soak them for a week in gin. Do not use the cheapest you can buy, nor the most expensive. This must soak for at least 7 days. Then you can begin to take them. You need only take 9 raisins per day. You can divide them 3-3-3, morning, mid-day and evening if you like, or take 10 and do 5 in the morning and 5 at night.

It took about a week before I noticed anything, but wow did I notice a difference. I also take Bio-Flex, but when I slack off on the raisins/gin, I can tell the difference. Please give this a try. I make a second jar so I always have one waiting to be used. Good luck!!

I had an MRI done on my neck, since I had tremendous pains in my right arm. Dr. Stated I needed surgery. First I tried all kinds of medications, none helped. While away on a 7 day cruise, I took no medications and had to suffer everyday. Upon returning, I found in my mail, a writing about remedies for arthritis. I sure was interested in it right away, someone claimed, by soaking raisins in gin and after a few days taking a spoon full of this would take away my pains. Sure enough I had these ingredients on hand, the next day after taking a table spoon of this, my pains were no longer around, I take this moderate in the morning and at bed time, 5 days have passed and no more nagging pains. Heiko, Long Island, NY

I'm going to share a remedy which is amazing. There are hospitals that have actually began testing this to see why it works so well for people with Arthritis.

Put the raisins in a glass jar, and cover with the gin for 2 weeks (in a refrigerator). Drain the gin. Refrigerate. Eat 9 a day. They taste terrible, but if you follow them with a Ritz cracker, you can endure. Within a month, the pain should be gone!

My Grandma had such bad arthritis in her neck, she would have to get shots every couple of months. She did traction daily, and took a lot of pain medicine. She heard about this home remedy on a call in radio show. They were asking people to call in with old home remedies. They had over 200 calls for this remedy alone. She decided to try it.

After a month, she did not have any pain, and didn't need the medicine, shots or the traction device anymore. Her doctors were amazed!

She takes them everyday! She hasn't missed in 15 years! When she travels, she puts them on ice in a baby jar. Good luck! I hope it works for you!

White Raisins and gin (remedy) Arthritis (ailment): Take a box of white raisins; place in a glass container, cover with gin. Cover with tight lid. Eat 10 raisins a day. (I put them in my ceral) Keeps pain and swelling from arthritis. When I miss a week my knees have shooting pain so bad that I have difficulty walking up stairs. Helps shoulder pain, and over all over body pain from arthritis. One of my students was in a wheel chair, and after treatment can walk with a cane.