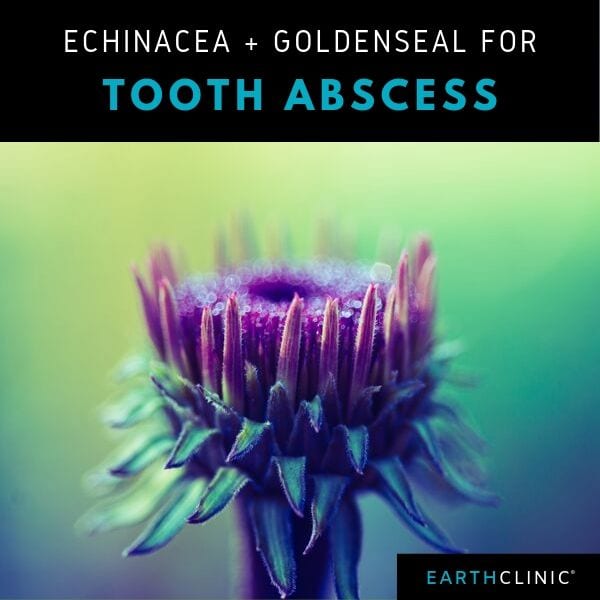 These two herbs provide potent immune support which is very important when healing a dental infection.

My GO-TO For Any Toothache / Infection pain gone within hours

I was suffering really bad from a double toothache both back teeth, one up top, one on bottom, on same side, now when I say pain I mean excruciating like someone was drilling into my teeth with a super sharp drill or ice pick kind of pain. The first thing I tried was clove oil, on a scale of 1-10 it helped maybe a 4-5. Then I tried tea tree oil with maybe a 2-4 result. This was the first night needless to say I got very little sleep.

Then day 2 was worse until I noticed that keeping cool/cold water on the area stopped the pain as long as I left it on there and water was cool/cold. This was good until it was time to go to sleep which I was unable to sleep because of the severe pain that returned in seconds after the water warmed up or was swallowed. Well I ended up doing an all nighter sipping on cool/cold water back and forth to the fridge every hour or so to get another bottle water. went through a 24 pack of 16oz waters in 1 day then I was about to go to dentist to extract them and luckily they were fully booked with no openings for a few days which made me call my local herb shop to talk to Gene and he suggested echinacea and goldenseal. Which they had in my favorite form (loose herb), which I made into a tea. and within a few hours

BINGO!!! the pain went down by 2 thirds and by end of day all my pain was gone except for a little soreness in the area which finally cleared up in the following days. and needless to say I never got the teeth extracted I continue taking echinacea tea but goldenseal can only be taken for 7-10 days at a time because it is so powerful (please seek professional advise on dosage).

But I mix in a little goldenseal into my echinacea tea from time to time as a maintenance dose along with a good amount of red clover. All in all I have found my go to for any toothache/infection and I can keep my teeth for the chewing that I need them for.

I am so happy you found help in the herbs. I hope anyone reading your post will not consume 48 -8 ounce cups of water in 24 hours. Use ice if you need to chill the area. Some peoples kidneys are not capable of handling that much liquid...so I post this as a CAUTION.

Some other helps for dental pain are as follows:(try one)

Keep your teeth by feeding healthy microbes that keep bacteria in check. Also keep minerals, water balanced, and the fat soluble vitamins through gallbladder health . Been learning the hard way.

I have just recently recovered from a very painful cavity and abcess under a molar. I had to cope with the pain for 2 weeks because I could not go to the dentist since nobody was available and also, they request that you wear a mask and I will not.

I was also very tired at the time, and was running a fever. I suspect that the abcess had formed, burst and infected me, causing the fever.

During the two weeks I tried several home made remedies :

- green clay, my absolute favorite, was partly disappointing : I used it dry and directly on the gum and it worked ok until the real pain came and then I could not stand the clay anymore on direct contact. It seemed to aim at the nerve and the pain got out of control. I then used the clay as a poultice on the cheek and it did ok but was not the best remedy, for once ;

- sea salt, vinegar and powder of cloves was used to rinse frequently and contain the infection. It helped a lot.

- oil of cloves (one drop) mixed with a thick oil (5 drops of castor oil or hazelnut oil in my case) worked very nicely and contained most of the pain ; I applied it directly on the tooth and gum ;

- elderberry flowers, as a herb tea mixed with mint was great ; elderberry acts as a natural antibiotic for staphylococcus and other ...coccus bacteria. I drank several cups a day and this remedy got rid of the infection quickly enough and for good.

I must add that after 15 days I ended up seeing the dentist (without a mask) ; she kept me over an hour, stuck the needle five times in my tooth, made me swallow lots of anesthetics and disinfectant (the coronavirus procedure does not allow you to spit anymore...) and was unable to confirm the abcess. I was about ok the following day but a week after the treatment, the pain had returned as bad as ever. This is when I added the elderberry tea to my home treatment as I did not trust the antibiotics she had recommended (generic penicillin).

As a conclusion, I think that there are other options for taking care of our teeth that seeing a dentist that agressively treats the tooth itself. It is possible to take care of tooth pain or gum disease without drilling the tooth or hurting the gum. And yes, even a very bad pain from cavity or abcess can be successfully treated.

Thanks for your other remedies. I am keeping a note on all these for future reference.

I have to add that the vinegar for the salt, vinegar and cloves mixture is CIDER vinegar.

As for the elderberry, I use the flowers of the kind (sambucus nigra) that blooms in Spring. They help sweating and getting rid of a fever also. The berries can also be used for jam.

There is another elderberry (sambucus ebulus) that blooms in late Summer. It is supposed to be (mildly) toxic but there is very little chance of confusing them.

Hi, a few years ago tooth got infected after seeing dentist, think it was from too much novacaine. I took goldenseal from the capsules, put some in an empty tea bag and put it where it hurt for 5 minutes at a time thru day.

I also brushed with goldenseal on toothbrush around infection.

I also brushed with kosher salt in the area and gargled with salt water. However it was the goldenseal that did it. The brushing with salt and gargling salt water alone did not solve problem.

In 2 days the infection was gone.

Hi, I had a tooth-gum infection once -pretty sure it came form too much novacaine-as I asked for alot of it and tooth became infected right after this.

Brushing the area with toothe paste and gargling salt water and putting salt on the area - helped a bit, but what worked best was putting goldenseal- break up the capsule- and put it right on the area and brush it gently, and gargle it and also put some in an empty tea bag, wet it with your saliva, and then hold it there for several minutes a number of times per day.

The infection went away quickly after I used the goldenseal.

I have used golden seal powder in the past for myself and my young daughter, applied directly to the abscess and held there as long as possible. Today I could only find the tincture and this can also be applied directly, but I wonder if the effect is less because it isn't going to stay on the abscess like the powder did. I'll let you know how we get on.

Several years ago, I had an infection in the root canal linked to four upper front crowns. I went to the Dentist who gave me an anti-biotic, which seemed to clear it up. Two weeks later the infection returned worse than ever, so I decided to try Echinacea (purple cone flower). I made a tea with a teaspoon of the dried leaves with a pint of hot water in a small stainless steel teapot and simmered the concoction gently for about ten minutes until it had cooled enough to hold in my mouth. I held the warm liquid in my mouth, swishing it around my mouth for about ten minutes, once in the morning and again before I went to bed. On the third day the pain which had been somewhere under my nose had gone, and I had an abscess on my gum which burst later that day and quickly healed. With love as always.

I cured an abscessed tooth by taking a half teaspoon of echinacea/ goldenseal tincture every hour for the first day of a really severe toothache and holding spilanthes tincture in my mouth to dull the pain. I discovered the herb meadow sweet to be the best pain relief for the tooth. Within minutes of drinking a mild decoction of the tea the pain would be gone for hours. It was a long weekend and no hope for going to the dentist. I was suprised the next morning that the swelling was way down so I continued taking the echinacea/ goldenseal tincture. as the abscess subsided i decreased the dose, taking it every three or four hours the second day . I continued for a week taking 3 doses a day. At the end of that time I had no abscess . It was confirmed a few weeks later by xrays at the dentist. I also drank lots of water with a 1/2 fresh lemon or lime sqeezed into to it.

I was reading to see if golden seal was recommended for abscessed tooth, and was shocked that it wasn't. Several months ago I was suffering with an abscessed tooth, and my dad gave me some golden seal, (yellow root). He told me to just put it on the abscess for as long as I could stand it. It is extremely bitter, but within 6 hrs. the swelling and pain was gone, and after 12 hrs. the area wasn't tender at all. I felt another abscess developing again a couple of months later. Applied the yellow root and it was gone before it even started to swell.