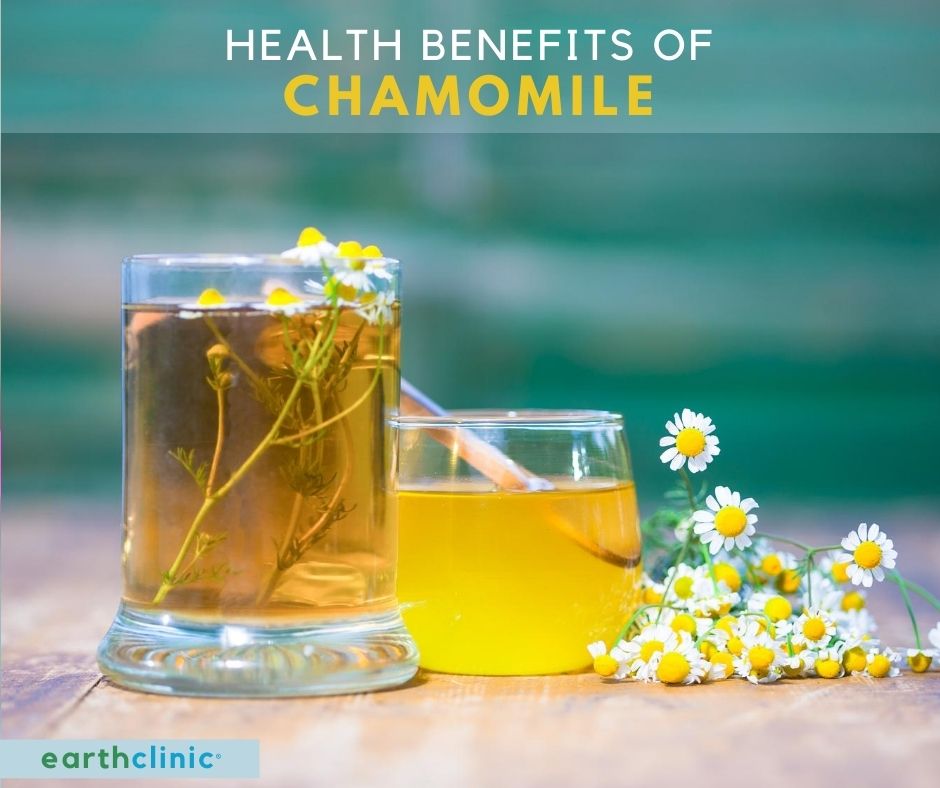 The Chamomile plant, especially in chamomile tea, is an age-old home remedy for settling the mind and improving the body. The leaves of the German Chamomile and Roman Chamomile plants have long been one of the world's favorite herbal teas and garden herbs for home health care.

Studies continue to find that chamomile has a calming effect upon the mind and body alike, but such studies are limited in scope and number.

Chamomile Tea is found to be excellent for anxiety and is a general anti-inflammatory that can reduce pain and improve overall metabolic function. The plant likewise offers mild antiseptic qualities, and as such, a poultice of the leaves can help in wound care.

Chamomile's calming and antispasmodic effects have provided relief to those suffering from intestinal disorders such as Crohn's Disease and IBS.

Chamomile, used both internally and externally, has been used to treat the following conditions:

A 2008 animal study found that regular consumption of chamomile tea might prevent blood sugar from increasing. The study found that this effect could, therefore, reduce the long-term risk of complications from diabetes.

Osteoporosis, which is the progressive loss of bone density, is most common among post-menopausal women and possibly due to estrogen effects.

A 2004 study found that chamomile helped promote bone density, and might have anti-estrogenic effects.

One study in human volunteers demonstrated that chamomile essential oils and flavonoids penetrate below the skin's surface into the deeper skin layers. This is important for chamomile's use as topical anti-inflammatory agents.

In one study, chamomile extracts were demonstrated to show significant reductions in cell viability in various human cancer cell lines, but minimal growth inhibitory effects on healthy cells. Chamomile exposure induced a form of programmed cell death called apoptosis in cancer cells, but not in healthy cells at similar doses.

Chamomile has used as a traditional remedy for its calming effect for hundreds of years.

Mild side effects are possible, as chamomile contains a small amount of coumarin and as the plant is related to ragweed.

The more potent the chamomile tea is, the more likely it is to cause side effects in sensitive people. Therefore, it is safest to start slowly with a low amount and work your way up to larger doses.

Continue reading below for feedback from Earth Clinic readers who have used chamomile and let us know how chamomile tea helped you!

I have been cold brewing chamomile tea and like the taste better than hot brewing. I drink it thoughout the day and make a glass to keep by my bedside at night in case I wake up feeling acid reflux burn. It has really been helping. It is also helping me keep better hydrated without drinking high calorie juices or acidic sodas. In my opinion, it is really helping my reflux.

I had suffered from severe reflux for months. Nothing seemed to help. While surfing the internet, I found some information about chamomile tea helping with reflux. I bought the green tea with chamomile and started drinking it at the first sign of reflux and always about an hour before bedtime. The chamomile tea helped immediately and I no longer have reflux. I guess Peter Rabbit's Mom knew what she was doing when she gave him chamomile tea and put him to bed after he ate too much in Mr. McGregor's garden! Regular chamomile works as well as the green tea/chamomile combination.

I talked to my practitioner recently, and he told me that Apple Cider Vinegar is good only for those people who have high acidity; for those who have low acidity it can be harmful. He told me the least harmful remedy for Acid Reflux and other stomach problems is CAMOMILE TEA. I tried it, and it works wonders.

For all those who have Enuresis, I can state as fact that even if you take medication to control your enuresis, Chamomile Tea will overpower that medication, and should not be taken. If you have anxiety, or need help getting to sleep, try other sources, because Chamomile Tea, at least for me, makes me really go.

Just a note of caution, Camomile Tea is great for most people. I have found that because I am allergic to ragweed that it causes me some respiratory problems as it is part of the ragweed family.

I think chamomile is a good contender for "king of herbs". In my experience it's excellent for:

Mild depression. One cup of chamomile tea can completely change my mood to that of being calm and optimistic. I think it contains tryptophan, which makes serotonin, hence its feel good properties.

Well.. chamomile works for me.. great for relaxing.. changed my mood to just calm..

I use chamomile tea bags anytime any of my body piercing get infected. It's gentle and ALWAYS works!

I warm up the tea bag (chamomile) in a cup of hot water. Then I apply the tea bag to my infected area. Not only does it drain out any of the discharge it also soothes the skin. I've never been scared or had to deal with scar tissue from a piercing infection. Any time I get a new piercing I use chamomile to clean it (instead of rough cleaners like alcohol or peroxide). Works like a charm!

I tried the Chamomile bath above for an infected cut in my foot after the doctor told me I would have to take oral antibiotics (my fourth course in 2008!) if it did not improve in two days. I bathed the cut twice a day for fifteen minutes (two tea bags in a litre of water). I also used an antibacterial cream and a paste of tumeric and honey (kept on for fifteen minutes after the chamomile bath - dyed my food yellow). Day three and the infection is nearly gone.

One of the best remedies for infections is strong chamomile tea. Our family has used this for many years. An elderly woman we knew years ago, fell down the stairs which resulted in an ugly infection in her hand. She was diabetic and the doctors could not heal her. My mom made a pan of strong chamomile tea and the woman soaked her hand in it for 15 minutes. Immediately you could see a difference. She continued doing this for a few days and was completely healed. It is best to make the tea fresh each time. Thank you for this excellent website!

I've had sleep problems for as long as I can remember and it doesn't help that I'm also bipolar. I've tried everything from mind tricks and herbal remedies to over the counter pills but one thing I found that seems to work like a charm is half a cup of chamomile tea mixed with half a cup of milk. The drink should be warm, not hot, so what I do is make cup of the tea by heating it in the microwave for about 2 minutes and then adding the milk afterwards allowing the tea to heat the milk. After drinking it, I'm asleep within half an hour.

I suffer from chronic allergies that cause heavy nasal and sinus congestion and post-nasal drainage. My doctor recommended the following simple remedy that has been very effective.

2. Pour a bit into your cupped palm and sniff it strongly up both nostrils.

3. Tilt your head far back and pinch your nose shut for 30 seconds or so, then blow your nose.

This produces a wonderfully clean and open feeling in the nasal passages and keeps them clear for several hours, better than commercial antihistamines I've tried. It seems even to reduce sinus pressure in the forehead. You have to experiment to find the best frequency of dosage -- if you use it too often you may find that your nose becomes too dry for comfort.

Free breathing and absence of drainage greatly improves your sleeping and general comfort.

Chamomile is a very good antihistimine. I use the essential oil on each side of my nose whenever I begin to feel sinus pressure, congestion, burning, etc. Works immediately. Added bonus, very healthy for skin and complexion.

I used the acv and it works but I have a hint for people with winter scalp (flaky tight scalp). Steep 2 bags of chamomile tea in 2 cups warm water for 10 minutes. Add a dash of lemon juice and 15 drops of calendula (marigold) extract then pour onto scalp and let sit for 10 minutes and shampoo and condition as normal. I have done this 2x a week wince winter set in and it is perfect. No more flaking or redness.

Chamomile is a great remedy for nausea and anxiety. I also drink a strong cup of chamomile tea for bad menstrual cramps because it can stop the pain in its tracks.