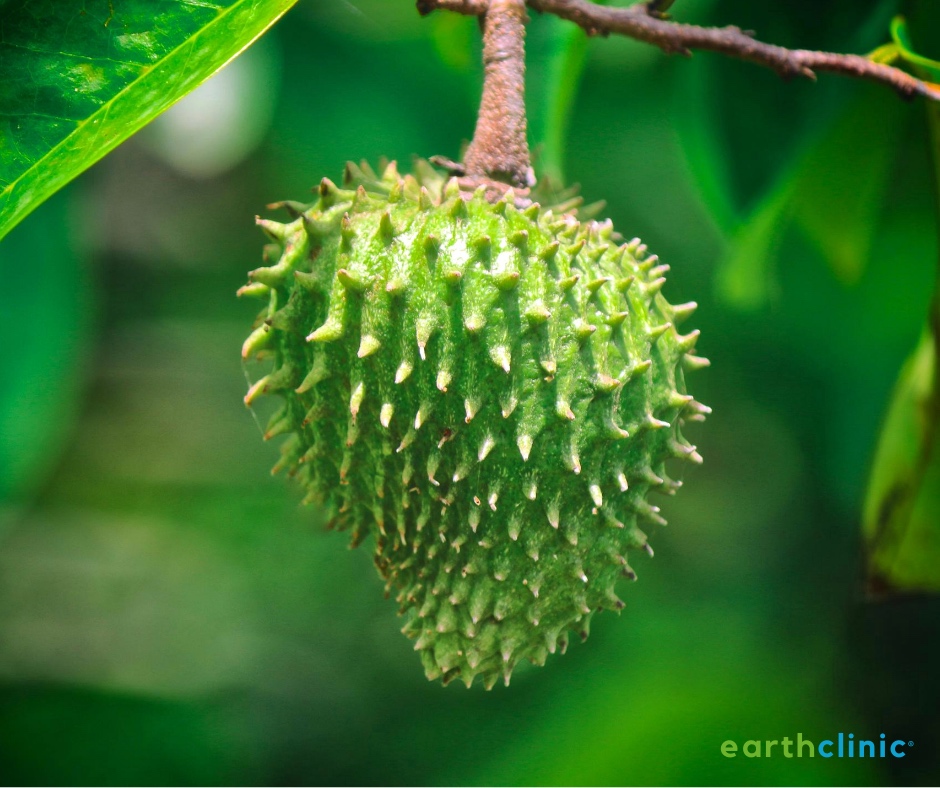 Belonging to the Annonaceae family, Graviola grows in tropical and subtropical regions around the world. It goes by the names soursop, custard apple, cherimoya, guanabana, and Brazilian paw.

The fruits from the tree have been widely used as food confectionaries.

Extracts of its bark, fruits, leaves, pericarp, seeds, and roots, have been used in traditional medicine to treat multiple conditions in Africa and South America.

Graviola contains chemicals called acetogenins, which are thought to be the active ingredient. Acetogenins and other secondary metabolites, including alkaloids, of this plant possess demonstrable ability to decrease the growth of cancer. (1)

One clinical case report describes a 66-year-old female diagnosed with metastatic breast cancer and whose metastases had progressed after multiple rounds of chemotherapy (including anthracyclines and taxanes).

The patient self-medicated by boiling 10–12 dry leaves of A. muricata in water for 5–7 minutes, then orally consumed an 8 oz daily dose of this aqueous extract. Her metastases remained stable for 5 years on Graviola (which she took together with Xeloda).

Below, P. Raghavan, a top Earth Clinic contributor, gives a detailed description of a Graviola tea protocol for cancer. This protocol has helped two women with stomach cancer in his village in India. His holistic treatment consists of Graviola tea, green alkalizing drinks, and probiotics.

Below are links to products available on Amazon. Please read the reviews before you purchase.

Cancer cells are formed when free radicals damage DNA of normal cells. There is a need to give high level overview of cells to understand this. Cells are the basic building blocks of all living things. An average human body composed of about 30 trillions of cells. They provide structure for the body, take in nutrients from food, convert those nutrients into energy and carry out specialized functions.

Average volume of some cell types are given below:

According to an article titled “ Mitochondria”, mitochondria are inside the cells and are known as powerhouse of the cell. They act like a digestive system which takes in nutrients, breaks down, and creates energy rich molecules for the cell. Mitochondria generate most of the chemical energy needed to power the cells. Mitochondria stores the chemical in a small molecule called adenosine triphosphate (ATP). According to an article titled “Mitochondrial Respiration”, mitochondrial respirations is the set of metabolic reactions and processes requiring oxygen that takes place in mitochondria to convert the energy stored in macronutrients to adenosine triphosphate (ATP), the universal donor in the cell. Defects in the mitochondria respiration may be the underlying cause of cancer.

Graviola (annona muricata) is a small evergreen tree found in South America, Africa, and South / Southeast Asia. Graviola leaf are rich in antioxidants, which help the body fight against free radical damage to cells. One can see 24 user reviews on graviola from WebMD by google search with “webmd graviola user reviews”. There are a number of articles available in the net about graviola and cancer. Some of the titles of articles are given below:

3) Can Graviola Help To Treat cancer?

About 6 years ago, two ladies in my town were diagnosed with stomach cancer stage – 4. There were given 6 month time to live by doctors. They could not afford chemo / radiation treatment at that time and also they didn't like the treatment. One of the ladies consulted a tribal herbal doctor in the state of Karnataka (nearest town: KOZHIKODE, KERALA). The herbal doctor advised her to make herbal tea using 9 leaves of graviola tree per day with 3 cups of water. He suggested to consume this tea during entire day or one cup in the morning, one cup in the afternoon and one cup at night.

There is a video available in the net titled “How to make soursop tea”. Soursop tree is another name for Graviola tree.

Ladies decided to take one cup of green drink rich in chlorophyll with some lemon juice from half a lemon. Green drink can consumed 30 minutes before eating. Green drink will increase oxygen supply to all cells including cancer cells and lemon juice will alkalize the body. They are living more than 6 years and are very active.

I noticed that some other people with similar conditions opted for regular treatments and they lived less than one year after diagnosis. They are taking now one cup of graviola tea per day using 3 leaves for maintenance after cure. But if they stopped taking this maintenace tea, they get pain in the stomach. But they are not taking any probiotics and flax seed now.

There is an article titled “Difference Between Antioxidants and Phytochemicals?” by Karen Collins of American Institute for Cancer Research. This gives some explanations for the above treatment. “Phytochemicals are chemicals produced by plants. Many phytochemicals act as antioxidants neutralizing free radicals and removing their power to create damaged cells. Many of phytochemicals that show high antioxidant scores in lab tests can't even be absorbed from the gut. However, healthful (probiotic) bacteria in the colon may break down many of them, forming other compounds that can be absorbed”. From this article, it appears that antioxidants can be classified into two types:

According to articles available in the net, graviola leaves are rich in pytochemicals ‘Acetogenins' . According to an article titled “Exploring the Leaves of Annona muricata L as a source of Potential Anti-inflammatory and Anticancer Agents”, the Annonaceous acetogenins are an exciting new class of bioactive natural products whose antitumor, pesticidal and other bioactivities are due to inhibition of electron transport in mitochondria. Mitochondria are known as the powerhouse of the cell.

2) Make one cup of green drink using one of the following: mint leaves, wheatgrass, etc. Then add lemon juice from half a lemon. Drink this once a day.

3) According to article titled “Probiotic Bacteria: A Promising Tool in Cancer Prevention and Therapy”, probiotic bacteria have been shown to play a significant role in immunomodulation and display antitumor properties. Some of probiotic strains recommended are Lactococcus Lactis, L. Casei, L. Plantarum, L. Rhamnosus, B. Longum, etc. I searched the net and the following six brands contains the above probiotic strains:

I hope the information provided here will be useful.

Thank you for this post, Graviola is one of my favorite anti carcinogenic supplements and is used in quite a few areas of the world which is one thing I look for in anticancer supplements because I feel the more different areas of the world it is used in for this purpose, the better it is likely to be for the purpose. I have used it effectively as part of an anticancer protocol.

I read your post with great interest concerning Graviola (Soursop).

I have been trying to find out what DEHYDRATED SOURSOP LEAVES ARE? I was looking for air dried Graviola leaves, but it would take over 4 weeks to come, so I chose this one DEHYDRATED. I did ask the seller before I purchased it and he said it was done under 43 degrees I think? The only place I found with the word dehydrated was in a very scientific paper which I didn't understand.

Can you tell me if this one I purchased is safe to consume because I also thought the leaves were bright green, but they appear to look like a dark green/brownish colour? The leaves came in a zip- Locked bag, and says CINO CEYLON on it but I bought them in the UK. And there is a little Lion Logo on the bag which says SR LANKA? Have I purchased the wrong type? Or would these be all right to use? And also have you any experience with anyone taking the capsules?? I did read the reviews on WebMd which looked very promising and some are using capsules, but I was told the leaves are best? I would appreciate a quick reply if you are around, and would also like to thank you from the bottom of my heart for trying to help people with your post! It is greatly appreciated. I have been diagnosed as having a nodule on the lower right lobe of the lung and a few small ones, and petrfied of going for a PET/CT Scan, which they states takes 2 - 4 hours, I really don't want to go the chemotherapy or radiation treatment way. And I haven't had the scan yet, as it has frightened me because it uses glucose etc.

I await your reply, and hope you can help me to find out if I can use the dehydrated leaves? Best wishes Rosina from London United Kingdom

Many active compounds and chemicals have been found in graviola, as scientists have been studying its properties since the 1940s. Most of the research on graviola focuses on a novel set of chemicals called Annonaceous acetogenins.

Graviola produces these natural compounds in its leaf and stem, bark, and fruit seeds.

Three separate research groups have confirmed that these chemicals have significant antitumorous properties and selective toxicity against various types of cancer cells (without harming healthy cells) publishing eight clinical studies on their findings.