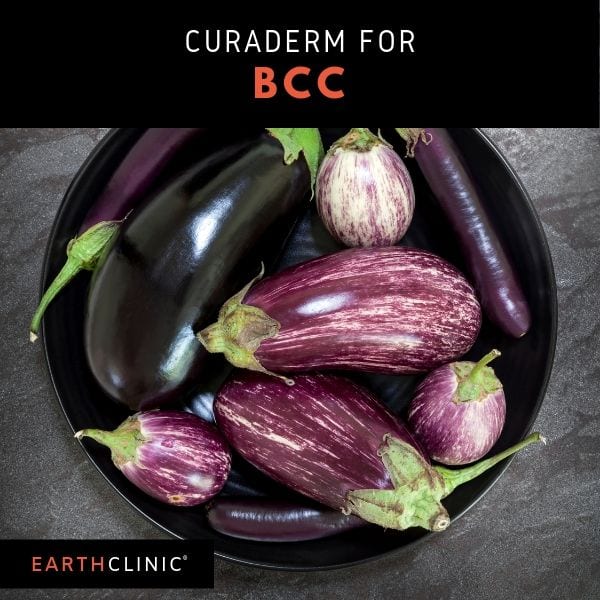 Discover how Curaderm, a product from Australia made from eggplant, can help Basal Cell Carcinoma and other skin cancers, according to Earth Clinic readers who have tried this natural treatment.

According to the website, studies have shown that Curaderm targets a receptor that is only on the cancer cells, making it safe to use.

The active ingredient in the cream is made from plants in the Solanaceae family; namely eggplant, tomato, potato, and bell peppers.

Where to Buy Curaderm

Continue reading below for more feedback from Earth Clinic readers who have used Curaderm for BCC. Let us know if you've tried this natural treatment and if it helped!

My husband and I have used Curaderm BEC 5 for several basal cancers with great success.

I used Curaderm for basal cell carcinoma, rather than have it surgically removed. That was over a year ago, and I've had 2 check-ups since with dermatologist and am all clear.

I started with 3 small lesions at my hairline where basal cells had previously been removed "professionally." After a few stinging weeks, I saw huge progress at those original sites, but the tentacles began erupting across my entire forehead and down the sides of my face. As I continued treatment twice a day, bleeding lesions crossed my cheeks and are now approaching my nose, where I've had two basal cells and one squamous cell removed, and my right cheek has nine lesions down to my chin, with six on the left.

I'm now at 2 1/2 months and am tired of stinging and burning (and spending more and more money on Curaderm). Apparently, I'm atoning for those sunburns, but I'm still hopeful that the result will be spectacular.

Hi Doc, thank you for your feedback on Curaderm.

Curaderm should NOT be used on any skin cancer that has metastasized, so please be very careful and write the company if need be. Metastasizing skin cancer is one of the big contraindications for this cream.

We're excited to let you know that we just imported 20 tubes of Curaderm, the topical cream our readers have been raving about for more than a decade, directly from Australia to sell in our online shop! You can buy it at Earth Clinic here. We'll ship it starting tomorrow, Thursday, September 2nd.

Curaderm is used for pre-cancerous skin growths like Basal Cell Carcinoma. Read feedback about it from EC readers here. It is also used for Sunspots, Age Spots, and Hyperpigmentation.

Curaderm is incredibly expensive to import, so we're starting out carrying a small quantity. We're selling it for $144 a tube, which is the lowest price we're allowed to sell it at.

It ranks up there with Gallixa for awesomeness, even though very pricey!

Curaderm raised its prices in January 2022, so the online price per tube is now $198. No Curaderm Distributor, including Earth Clinic, is allowed to sell it for less than that.

In reply to GertJr:

I have 2 questions about Curaderm, which I got for my husband. It says apply 3 times per day for 3 days--wash the area before each application or just put it on? As to the paper tape, his skin is so thin and tender that adhesives may damage it. Do we really need to use the tape, or can we just leave it open to the air? On face and ears, so easy enough unless sleeping.

Wash it before applying with a mild soap. Dry thoroughly. Yes, you need the tape, micropore is best but paper tape will work. Paper tapes in general are very mild for sensitive skin.

Dear ORH or anyone who has tried Curaderm for SK, BCC or SCC,

I was wondering if you can advise please. After reading your posts on the subject (thank you very much!), I ordered curaderm online. Very expensive ($140) for a small tube that comes with tape and a book but I think it will last a long time. I bought it to use on my husband's back, which has a number of suspicious spots to me, but which the dermatologist deems fine each year (!)... a few of these "normal" spots look like pimples that keep bleeding.

I applied a small amount of curaderm on each one of them and covered them with medical tape but am unsure how long to keep going. It's now been 10 days. The book says apply for 3 days for SK and 30 days for BCC and Squamous Cell... I stopped applying on a few spots that smoothed over, since that is what the book advised. So my main question is... do you keep applying it every day until there is no bump left? It looks like he has cigarette burns all over his back! A few of them, the ones that bled here and there even before the curaderm, have itched him intensely after application. Thanks for help on this. I think it's powerful indeed, but want to know the most effective length of time to apply from those who have used it over the years.

MARGARET,,,,,,,,,,,,,,,,,,, if you are speaking of Dr Cham's book, then I'd buy in. I don't have good vibes about my purchase from Walmart because there are too many knock off artist out there. The tubes look the same , but that's not a mountain to climb. I will go back and purchase directly from Dr Cham , even if it takes longer. I keep applying until there is no more reaction, nor burning sensation. I try to apply 2X day. Helping my Tractor Driver put up apple juice from 3 bu of apples. Our juice is 100% . After reading about Cheese, I wonder what % of apples are in Sto bought juice?

Thank you very much for your reply, ORH. I will continue applying it and let everyone know how it worked out. I do think it was the real product from Walmart. I am more concerned (understatement) about counterfeit products from Amazon after receiving several questionable supplements with bad labels!

We have used curaderm for several years. It was made in Australia, not cheap but cures all cancer except melanoma. Also cured my wife of a pressure ulcer on her ear hole almost through. Eight days later new skin, no pain ever.. Unknown growth in ankle and other places healed. We love the products and have pics to prove what I say. My age is 79 and I want healed not symptom relief with side effects.

HI U OLE PATOOTS DOIN,,,,,,,,,,,,,,,, man, did not do my keratosis thing last year and my face is covered with a cancer of some sort. My dermatologist would change my looks forever if I allowed his knife. Instead , I am using Curaderm as I have for many years. He knows of it, but will not acknowledge. That's the way they are. The reaction is so drastic that I can hardly stand the pain. But it does subside in an hour or so. I have stopped my 2 treatments /D to allow my face to heal. It has now peeled and looks great, but I am not comfortable and will start my program again next week. I am wearing a long shirt this year and a straw shade hat. My ole Mississippi PawPaw knew this many moons ago. His skin was like an ivory soap bar. It never saw the sun. Now...... he did have a wrinkled red neck for certain. What is so amazing about Cruaderm is that it only reacts with cancer cells. Put it on healthy skin and nothing happens. Curaderm can be bought on line. I initially bought it from the Dr who made it. Now, I buy it from Walmart. There are scam folks here....... so beware. ====ORH====

Hope it clears up fast ORH. Pls keep us posted.

For treatment of basal cell carcinoma please google Curaderm which is based from eggplant. You can research it and order it online. It is approved for usage in treatment of basal cell carcinoma in Australia. US FDA has not approved it (of course because it is much cheaper ) than the protocol that US MD's will recommend. Read the Curaderm website. I have personally used Curaderm multiple times with success that has given me 100% satisfaction. When I see a suspect site on my skin, I go to a dermatologist and have a biopsy. If the lab confirms that it is basal cell, I use the Curaderm. The dermatologist that I go to confirmed that he knows about Curaderm, but since it is not US FDA approved he can not recommend it. It is important to continue the application of the cream for the full cycle of destruction of the cancer cells and renewal of healthy skin. It may take day 21 days or longer depending on your situation.

I used curaderm 3 years ago and was very successful, last year I had another spot and it did not work after more than 6 months of applying it day and night!!!

I am looking for something else? I hope the Apple Cider Vinegar will work!

CURADERM WORKS, but it does not for Melanoma. I would go to dermatologist and Have it analyzed. Melanoma will put you in the grave. =====ORH====

I have a tiny BCC on my left cheek right under the eye. I was thinking about using Curaderm cream. Has anyone used it on that area? Does it leave a scar there since the skin is very thin in that area. Thanks

HI U ANA AND OTHERS INTERESTED IN TREATING SKIN CANCER. I have used Curaderm for a number of years. I first bought and read Dr.Cham's book, " THE EGGPLANT CANCER CURE". Not only is the book educational, but it is also very interesting as how the Australian government first helped him and then tried to put him in jail when his cure took business away from the dermatologists.

There are numerous color photos and one is exactly where you say your cancer is.....right under the eye. The photos how the before and after so you can see that there is little or no scaring. My advice to all is to buy this book and read it 3X's. You add the cream and cover it with micropore tape. If your site is indeed cancer then a black scab will eventually form and fall off when the cancer is gone. Mine are usually gone is a month or so. The cancer is usually far larger than it appears on the surface. There are numerous sites on the net reviewing all of the above.

I wish you well.