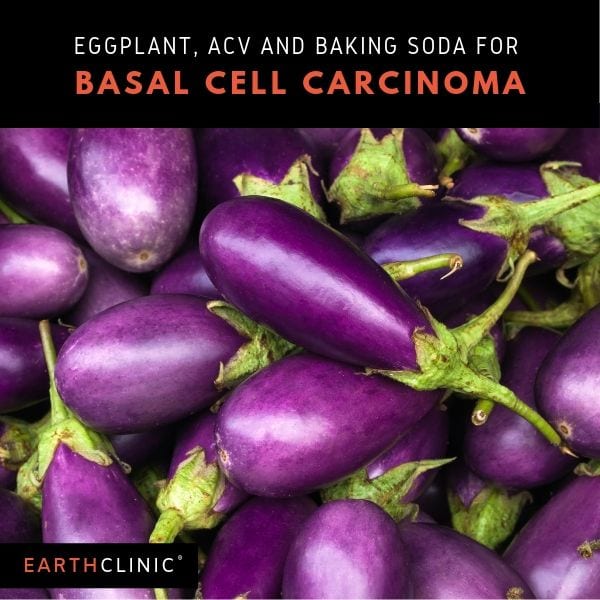 Discover how a combination of baking soda, eggplant and apple cider vinegar is used topically to treat basal cell carcinoma, according to Earth Clinic readers who have tried this natural remedy combination.

So on August 31 I had sore biopsied to find out what it was. It was about the size of pencil eraser, with a scab over roughly half of it and the other half kind of weepy/bloody that would bleed easy. The technician proclaimed it looked like BCC but wanted to do a biopsy to be sure. I would hear back in 10-12 days.

Started as a weird pimple that wouldn't go away and over 4 years or so wound up being a scabby sore that would bleed occasionally. I had it looked at 3 years ago and the doctor told me it was a cyst. I figured I had to wait anyway, might as well try some homeopathic treatments.

For the first week I applied a paste of organic coconut oil and baking soda, held on with a bandage, over night. Washed off in the morning with regular soap and water. Repeated every night for a week. I noticed after the second day, the bleeding had stopped and a scab started to form. I made a batch of eggplant in ACV because I had heard about this cure and also that cancer cells change form every 5-6 days, so I thought I should change the attack as well.

The second week, I felt as if I had killed the bad cells, so I started applying the eggplant tincture. I just dabbed it on with a cotton swab whenever I remembered, probably 5-6 times a day and several more times at night. When I went to sleep I put frankincense oil on it. By the end of the second week, I noticed that it was starting to get a little smaller, had a scab for a couple of days that would fall off and regrow and I just felt like it was cured but not healed. I had ordered some of the black salve so the 14th night, Friday, I decided to see if there was any cancer left by putting the black salve in it. I was so scared but I covered the end of my nose with black salve. No reaction at all, a little tingle but I think it may be because I had this stuff all over my nose. After about 3 hours, I washed it off, put frankincense all over my nose and went to sleep. The next morning, I had a crusty scab with a black dot where the BCC had been and about 5 other little crusty scabs that branched out from the main sore. These other little scabs were about the size of one of my pores.

I kept applying frankincense oil 2 times a day for the entire 3rd week. After 2 days all of the scabs fell off when I washed my face and the bigger scab had a cone of white goop under it. Tomorrow, Friday, will be the end of week 4 and I have kept on with the frankincense oil and also applying vitamin E oil. Right now I have a hole of pink skin, no blood, about 1/2 the size of a pencil eraser that will develop a scab which will come off when I wash my face every 3rd day or so. I am starting with straight up ACV over night to hopefully close up the hole. I am going to give it another month to hopefully heal and then get it rebiopsied.

Beinafraid,,,,,,,,,, be careful with black salve on your face. It does not know when to stop eating. I have used it but not on my face.

I have used it on my face very carefully....but I use ACV and eggplant mixture sprayed on my face to prevent cancer....seems to work.

Thank you you for the warning. I put Black Salve on my nose for 3 hours to see if there would be any reaction and to see if I had killed the BSC with the baking soda. When there was no reaction, I wiped it off, but I think the Black Salve still found something because a little cone of white stuff with a black dot in the middle came out, as did a couple little pore sized crusty things.

It has been 5 weeks and I now have a little depression where the BSC used to be. It is definitely healing from the inside out because the depression used to be a little hole. I am thrilled that I didn't have surgery and even more excited that homeopathic medicine cured it!!

So happy to have found this group.

HI U BEINAFRAID,,,,,,,,,,,, I stay in the sun constantly while gardening and I know I have a cancer coming when my facial skin get rough. Stuff happens. I do two things for this. One is to use BEC 5, Curaderm, which is made from eggplant. That is a no brainer. Works every time and no facial scars. I do use a dermatologist when it's spooky time. My guy knows about BEC 5, but that does not make him money. He does recommend 5% Fluorouracil for stuff that has not yet turned into cancer.

I want to cry when folks use ACV and other stuff that make a great post, but do nothing for their cancer. You don't play around with cancer. It will put you in the grave.

Today we are putting up muscadine juice and apple juice. Always did it like Grand Maw did, but there is now a better way. It is a steam juicer. Takes all day, but it is clear as a bell and tastes great. No doubt you kill the enzymes with heat. You can't have it all.

Age is starting to be a drag. I got to get back into detox and start to feel good again. I now keep a constant head ache. I see a NP every 3 months soes she can send me to a specialist. My 20 year family doctor did not know sheet from Shinola and I flushed him. When he sees me going to his NP, he gets indigestion. He knows that I know more about health than he does, but he wears a white frock and looks the part. He also has lots of religious things about his office. Since I's a Christian, I read the guy. Will leave it at that.

Talking the walk is not walking the talk. It's just that simple. If you read EC constantly, you learn who knows what. I alway get into trouble when I point out who knows squat. So, I'll leave that up to the readers.

Ol Robert Henry--how do you use eggplant for the crusty skin stuff? I will look into getting Curaderm, but would like to start asap. My DH has scaly, crusty spots all over due to sun damage (25+ years at sea will do it! ). The dermatologists love to cut on him and he's about done with them. I can do eggplant, tho.

We raise egg plant, but buy the cream from Dr Cham. Buy the book. Now the BEC 5 cream can be bought from Walmart or Amazon. Way back when, we had to buy it from GT Britain and it took months and had to go through customs. Now you can get it in two days. Stuff happens.

You are wise to use this product. The little tube will last you a lifetime. Don't get into the egg plant stuff yourself. You will die before you find the answer. I have tried.

Hi. Do you have this tincture recipe? Thank you