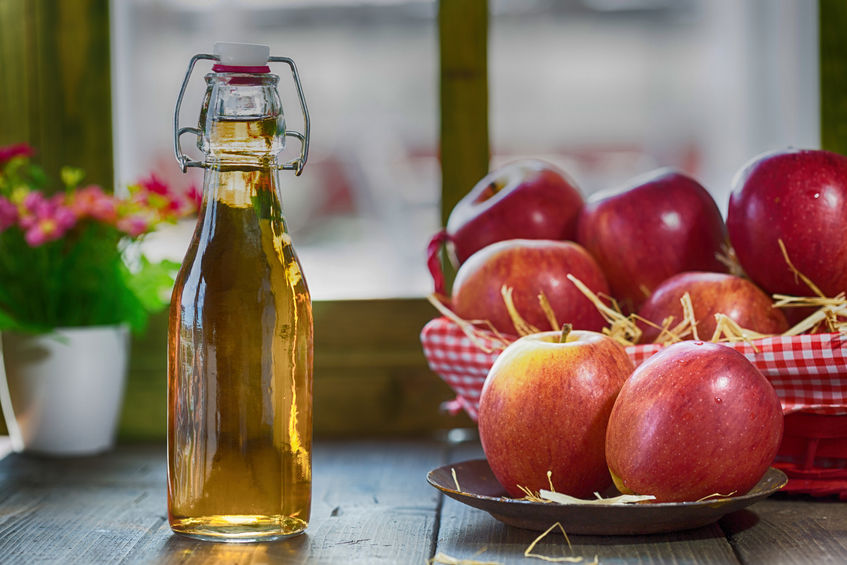 Apple Cider Vinegar is an effective natural treatment to shrink and soften lipomas. While a lipoma won't disappear overnight, it will soften after a few days if you take the ACV tonic consistently. It can take several weeks or even months for a lipoma to disappear. Dietary changes, such as avoiding soy and artificial sweeteners, along with daily apple cider vinegar can also speed things along.

How Do I Use ACV for Lipomas?

Take 1-2 tablespoons of apple cider vinegar in a glass of water in the evening before bed. According to our readers who have had success using this method, it takes about a week to see a change in the lipoma. Some readers report that the lipomas disappeared altogether using ACV after a few weeks, while other readers report that their lipomas shrank and became softer almost immediately on the ACV but did not disappear.

Are There Side Effects Using Apple Cider Vinegar?

If you have any side effects while drinking ACV for lipomas, stop drinking it immediately. You should feel better within 24 hours. Magnesium, potassium and B Vitamins can help alleviate side effects of apple cider vinegar.

Continue reading to learn how effective the ACV treatment was for shrinking lipomas and please share your feedback with others if you have tried this remedy!

My body is loaded with lipomas which started when I was a teenager, multiplied through two pregnancies and went off the chart when I aged into my 50s. I have been drinking the equivalent of about 8 ounces of apple cider vinegar daily, 2 to 3 tablespoons at a time throughout the day and during the evening. There has been a significant difference now having done this for approximately four weeks and I am overjoyed at the fact that many of them have begun to not only soften but shrink and disappear.

You have nothing to lose, stick with it and be consistent, everybody's body reacts differently and for some reason, it has worked for me. Good luck!

Be careful taking too much ACV. I have read of osteoporosis happening to a lady in her 20's. I have a bump on my head that is so annoying when I get a haircut. I am trying topical castor oil on it. I will update on how it goes.

Careful to rinse or brush after vinegar. esp. before bed, as acid dissolves calcium in teeth.

EC: Can someone please translate the above from Hindi? This is from Google Translate!

Hello dosto Meri puri body me 500 lipoma Mayine 15 days from apple cider vinegar use Karna Chalu ki h. I have no idea how many times I was able to share my birthday.

I will translate it in English for every body.

Hello friends, on my whole body I have 500 lipomas. For last fifteen days I have started using apple cider vinegar. If any result comes up, I will surely share with you.

EC: Thank you so much, Baldev!

Here is the English translation of Alok's request:

Hello friends, I have 500 lipoma all over my entire body. I have started using apple cider vinegar from 15 days. If I get any results I will definitely share with you.

EC: Thank you so much, Tina!

Hello friends, There are almost 500 lipomas in my whole body.I have been using ACV for 15 days.If I get any result I will must share with you.

EC: Thank you so much, Maria!

This means "hello friends. I have 500 lipoma in my body.and I have been using Apple Cider Vinegar for past 15 days and so on. if any outcome or result would seen, then I will share this with you.

Apple cider vinegar for lipomas - just take two tablespoons of apple cider vinegar every night before going to bed. Follow this treatment for about 3 to 5 months - make the bump go away. 2 to 3 times a day, morning and night.

I used Apple Cider Vinegar for around 3-4 months.

I used to take it empty stomach in the morning mixing it with water of 2-3 tablespoons but unfortunately it didn't helped me in any way.

All the lipomas are still present and none of them have shrunk. If any other meds are there, please let me know.

I have been taking two tablespoons of apple cider vinegar every night before going to bed for my lipoma since August 2015 (My mouth is already watering, sigh) but I will admit I have seen some significant changes to the size. I just don't know if it will ever fully go away. Mine is on my upper back shoulder blade. Very visible with strapless and spaghetti strap outfits. I wish I would had heard of this 30 years ago as mine started to grow and I was 19. Thanks.

Thirty years ago, I had a lipoma growing along my spine. I was in excruciating pain, could only stand for 15 minutes. The lipoma was pushing against a nerve. They did a simple outpatient procedure and removed it. Within a week the pain was gone. Really glad I did that. Now I have developed several in my abdomen. I am going to try the ACV treatment and see how it works.

What was the outcome with the apple cider on your lipomas?

I am 64 years old and I have had fat deposits for over 30 years. I have one between my neck and shoulder the size of my fist. They are in my rib cage, arms and in my back with several next to my spine. I would have the larger ones removed, but the root system of them embed themselves into muscle and I can follow the root system under the skin to where they are all connected/attached to each other. I probably have over 100 in my chest, back and arms. I have one under my arm the size of a golf ball. I have tried apple cider vinegar to no avail. Doctors are no help and only offer surgery, but claim since mine are so deep, healing will be a real issue. My father had 2 or 3 small ones, but had them removed. He complained about his, until I showed him all of mine.

Some of mine are painful but nothing I can not live with. I am open to other suggestions beside the vinegar.

Lipomas are SYMPTOMS of a larger issue. Lipomas are an effect, not a cause. Just like w cancer, lipomas have not invaded the body, they have been produced BY THE BODY as a sign or result of some CAUSE.

Please find presentations such as A Quest for the Cure, Truth About Global Cancer & others. They have tremendous resources throughout.

***Medicines NEVER cause harm. Poisons do that. Medicines heal, or they are not medicines.

I have had approx 20 of these lipomas removed over past 6 years via incisions. Only recently have I been better informed on what I CAN DO to help treat the CAUSE. :)

I'm 38 had them since I was 20. Got on legs side back arms. They stopped showing up from 24- probabily 34 but last few years 1 after the next. I don't know what I started taking a bunch of supplements and started exercising. Also the apple cider at night. I had 1 start to dissolve. Flaked off on my diet though.
Well it sucks but it's nice not being the only 1 with it. Wonder if it's from my fillings some times? What do you think, just genetic?

I using the American apple cider vinegar for two weeks but it is not reducing fatty tumors and please you tell me any information is there.

Wow I wish I would of read this before I let the dermatologist do a biopsy it was just a small area, but it still hurt months later it was deeper than what she thought anyhow the lab said it was just lipoma . I think that the biopsy was unnecessary I had couple more of these lipoma fat deposits on my lower back so I started ACV and they are disappearing. We're vegetarian and we eat tons of organic nuts I wonder if the fat deposit comes from nuts so I cut back on them.

The first doctor I saw said if the lump didn't go away she would do a biopsy. I moved towns and my new doctor sent me for an ultrasound to confirm it was lipoma. A lot less invasive.

Hi Guys, I brought organic Apple Cider Vinegar from local store and it is easy to take with water. This is just one week now and my lipomas are getting soft. It seems like this is working for me.

For lipomas, I you want fastest results that work within hours. Here is the miraculous tip.

Get some Turnips, boil and fry them and eat them with spoon in your dinner. Add the taste of your choice, (chilli sugar etc)

Before going to bed, take a couple tea spoons of apple cider vinegar. If by chance you happen to wake up in the night (or rather set and alarm / reminder) eat as much turnip as you can.

Re-do the task till results are as per your desire.

I am male 32 from Pakistan, currently working at Kabul and having 3 lypo lumps in my head. One of them was pluto, whilst the other two were jupiters. It was a real embarrasment for me all the time. I couldn't comb my hair propely. I contacted many physician and they told me that any surgeon shall offer me surgery. But if its not painful, let it be.

I read Julia's suggestion quite long ago but was stuck in my professional thingies all the time. Last night I finally bought the apple cider vinegar bottle of 450cc. I took two table spoons last night and two in the morning. Miraculously, the huge lypos are now the size of mars as compared to previous. I really want to thank you for sharing this with us.

With love and thanks, Akram

I tried apple cider vinegar for a month and didn't notice much change in my lipomas. I am going to keep going with it. I am going to setup a blog and I think what I want to do is try to find the common link between all the people that have lipomas.

So I want people to put in their age, their location, and their diet, do they eat dairy. etc. There must be a reason these things suddenly appear, I refuse to believe that for no reason at all they appear.

What do people think about this?

My father has had fatty lipomas growing on his stomach and arms for years. He also has type2 diabetes. His friend told him to take 2 tablespoons of apple cider vinegar before going to bed. He has been doing this for a 6wks. His fatty tumors have shrunk half their size and many have totally disappeared. They are even soft when you touch them and they use to be hard lumps. His blood sugars are also regulated and never high in the morning like before. He has made no other dietary or supplement changes. I really believe this will work for you.

My dad is doing great! His arms and stomach are looking great. He doesnt dillute it but takes 2 tablespoons faithfully before going to bed. I pray this works for you all like it has helped my dad. Good luck!!

Hey All!!!! Looks like we are not alone!!!!! Me suffering from Lipoma for good 10 year and it started to multiply at rapid pace for last year and half... My Dr. Say no way out for lipoma but will give a try to turmeric (Haldi) paste with olive oil and ACV two tea spoon bed time. Will also Pray to god that It works.