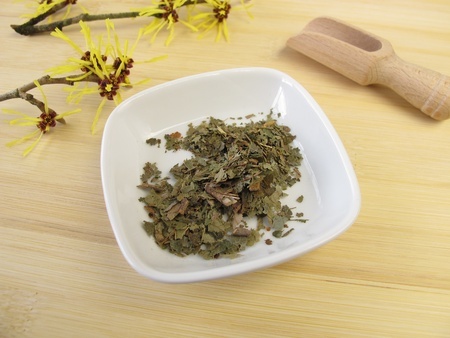 Witch hazel stands unique among natural remedies. This natural anti-inflammatory astringent is both an FDA-approved non-prescription drug ingredient and was said to be used by witches to fight evil. It's more likely that the "witch" in witch hazel refers to the use of witch hazel as a dowsing rod to "witch" a well, or find water. Gardeners from Nova Scotia to Florida enjoy seeing delicate golden flowers blooming in the dead of winter. Witch hazel was an ingredient in the first mass-marketed toiletry that was made in America (first named Golden Treasure, later renamed to Pond's Extract).

Some of the Modern Uses for Witch Hazel

1. An Excellent Natural Astringent for the Skin

Used on the skin, witch hazel removes excess oil and shrinks pores.  It also reduces puffiness and discoloration around the eyes.

Applying witch hazel with a cotton ball will speed up healing, stop bleeding from minor cuts and fade blemishes.

Take a small bottle if you are going to spend time in the woods.  It helps to stop the itching and burning from poison ivy, poison oak and insect bites.

Wiping on witch hazel after shaving will stop bleeding from minor nicks and prevent razor burn.  It is just as useful after hot wax treatments

What Is Witch Hazel?

Witch hazel is a multi-stemmed, slow growing shrub native to North American forests, growing 15 to 20 feet tall. In winter, the wispy, golden blossoms are an amazing sight when nothing else is blooming. Studies have identified the active compounds in witch hazel as flavonoids, tannins (hamamelitannin and proanthocyanidins), and volatile oil that cause the astringent action that helps to stop bleeding and reduce painful, itching hemorrhoids.

Witch Hazel Exract is defined by the FDA in the USP as "a clear, colorless distillate prepared from recently cut and partially dried dormant twigs of Hamamelis virginiana Linné, containing natural oils and 14% Alcohol." Witch hazel's historical uses include one very non-medicinal application!

Do You Need to Find Water?

One of the most interesting pieces of lore associated with witch hazel is its use in dowsing, also called divining or "witching." When exploring, early European settlers watched and adopted the practice of using small, flexible witch hazel branches to find water. The twigs or branches were held in a forked position and would bend at sites of underground water.

Historically Significant in the Treatment of Dysentery

Dysentery is an intestinal inflammation causing severe diarrhea; this serious illness is much more common in the tropics, with 120 million worldwide infected each year. While it is no longer seen frequently in the U.S., dysentery was a serious problem in the past. During the 1840s Mexican War, dysentery killed more soldiers than bullets.

Witch hazel was used as an effective remedy for dysentery and other stomach issues. Studies have shown that a number of active compounds, including flavonoids, played a role in this medicinal use.

Witch Hazel was an Important Natural Cure for Native Americans

Native Americans learned of many theurapeutic uses for witch hazel over the centuries, including:

Witch hazel is an inexpensive natural remedy with many wonderful applications. Please let us know about any witch hazel remedies that you have discovered!

I only saw my Grandmother, who lived with us when I was a young girl, use pure, cold water on her face every morning. Though she KEPT a bottle of witch hazel on the shelf by the sink, I never saw her use it on her face, just plain water. But here's my mother's grandmother/ witch hazel story: When my mother birthed a huge 3rd child, she was so badly ripped up that she could not move for the terrible pain.

My grandmother, who had been travelling, visited her at the hospital the afternoon of the morning birth and assessed the situation. She then went to a pharmacy and purchased a giant cotton pad and witch hazel. She soaked the cotton pad and placed it between my mother's legs. My mother said, within minutes, she could actually feel the drawing of the pain by the witch hazel and within two hours, she was walking around, pain free. I did mention once before that my grandmother was a healer/mid-wife from a rural community of the early 1900's. She was known far and wide, especially to the "train jumpers" that she fed from a huge black kettle in her back yard, near the rail-road tracks, during the great depression. She was a woman who saw people in need and dived in -- AND, it didn't matter to her what color, religion, philosophy, or background came off those trains. People were hurt and starving, so.....