Natural Remedies for Swelling from Injury 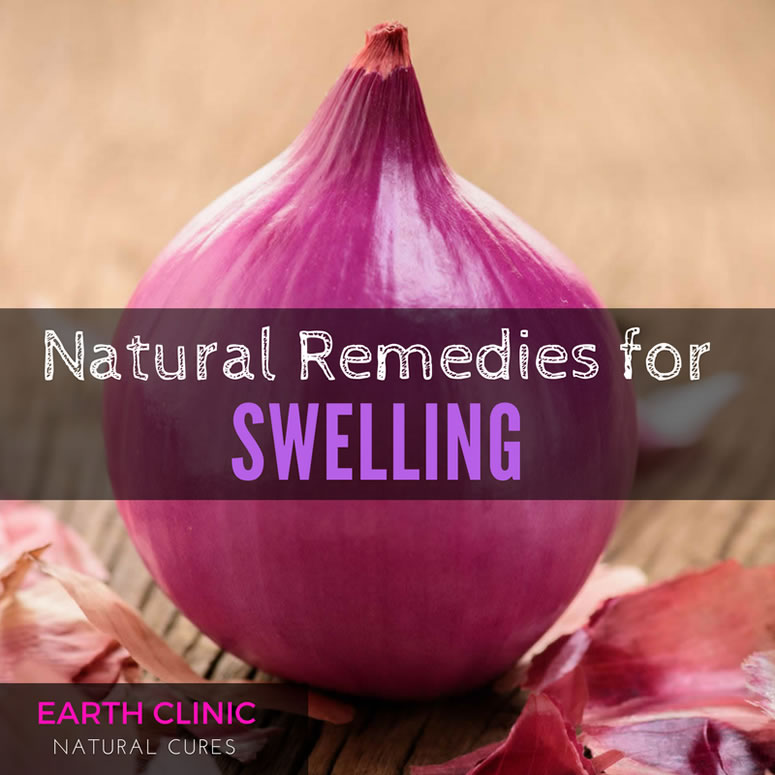 Injuries can cause sudden pain and swelling. The swelling itself can cause additional pain as the fluids that are causing the swelling increase pressure. Natural remedies for swelling include apple cider vinegar, ice and onions!

A variety of injuries and accidents can precipitate swelling. Sports injuries, falls, sprains and accidents can all cause swelling at the site of trauma. This inflammation is the body’s response to the injury and has protective value, but when the swelling is excessive it causes pain and even other complications. Preventing swelling by beginning immediate treatment is easier to do than reduce swelling once it has begun. But natural remedies can be used to prevent swelling and reduce swelling.

First of all, make sure that a home treatment is appropriate for the injury. While you do not want to be the first one to the emergency room for a stubbed toe, neither do you want to be the last person to get medical help for a broken bone.

Some of these remedies are appropriate to use during transport to seek medical attention. A family member or friend can keep ice on an injury to reduce pain and swelling, for example.

Applying ice will help with pain and swelling. A bag of frozen peas or blueberries makes a nice ice pack. It is always wise to be prepared ahead of time for injuries by keeping ice packs or a rice sock in the freezer.

Keeping the injured part elevated helps to prevent swelling. For example, if an ankle is sprained, the leg/ankle should be elevated.

A cloth soaked with apple cider vinegar can be used as a compress to reduce swelling and pain. This can be used overnight.

Castor oil can be massaged onto a swollen area to reduce pain and swelling. This is best done after ice has been applied.

Raw onion makes a great poultice to reduce pain, swelling and risk of bruising. Chop an onion. Wrap it in a towel or cloth. Apply this poultice to the injured site and secure with an ace bandage.

Geranium essential oil can be used straight (neat) directly on the area of injury to prevent bruising and swelling.

If you have a topical arnica oil or salve, apply this to the area of injury. Arnica should not be used on broken skin.

Resting the injured area is important to allow healing to take place and reduce the risk of further injury.

Always keep an eye on a person who has had an injury. If the person has serious pain, unusual behavior, vomiting or any other unusual symptoms, seek medical attention.

Have you tried one of these remedies for an injury? Do you have a remedy to add? We would love to hear from you!

Saturday night my adult daughter accidentally (of course) slammed the car door onto two of her fingers.

I immediately put water on to boil to soften my dried plantain leaves, ones I harvested and stored for such a time as this.

As soon as my daughter came in I gently rubbed some arnica cream onto both fingers.

Meanwhile, I used the boiling water to rehydrate several leaves in a mug. After a couple of minutes, I rinsed the leaves in cool water, placed them on the counter, and used a rolling pin to flatten them out and further release their healing properties.

I wrapped her fingers with the cool leaves. I covered those with some plastic wrap and then attached it all with cohesive tape. As soon as the plantain leaves were on her fingers her pain was less.

I encouraged her to keep the plantain on her fingers all night and to be sure to sleep with her hand on pillows above the level of her heart to keep swelling to a minimum.

The next morning she removed the poultices on her fingers. She had good mobility and little pain or bruising. The two cuts on her fingers had already begun to close up and heal. (The cuts were small. I did not put arnica into the cuts as arnica is not meant for broken skin.)

She never needed any more treatment. She had a little bruising on the fingers, I think where I didn't get any arnica cream.

Plantain is amazing. It took her breathtaking pain to a very manageable level in a minute. I have seen this happen before. That is why I always harvest the fresh plantain leaves this time of year. I put them on a cookie sheet in a room with a fan until they dry out. Then I store them in my herb cabinet til needed.

I hope you don't ever need this remedy. But if you do, now you know what to do! :)

Cayenne pepper was a miracle treatment.

Something fell on my foot and started swelling after about 2 hours, causing intensive pain. Applied cayenne pepper together with white vaseline and just elevated my feet. Within 4 hours I was able to walk on that foot after application of the above with rest.

The other day my five year old was running up a flight of wooden steps. He feel and hit his shin very hard. (It hurts just to hear about it doesn't it?)

He was crying and miserable. I put a frozen rice sock on it but after a while removed that and was shocked to see how large a goose egg was on his shin. He was still crying and didn't want to put weight on his leg. I was starting to wonder if he had cracked his shin bone. I was considering taking him for an x-ray and then I remembered onion. A slice of raw onion works really well for goose eggs.

I cut a slice of fresh onion and applied it to the goose egg, covered it with plastic wrap and then cohesive tape. This did even seem to bring pain relief pretty quickly. He ate dinner and played and a few hours later I removed the onion poultice. I was thrilled to see that the swelling was reduced. He was able to walk around.

I put castor oil on the leg with a sock for overnight. The next morning he still has some swelling but was running around as normal. He said it didn't hurt. He has almost no bruise at all. (I would expect a dreadful purple bruise.)

I am including a picture so you can visualize how the poultice is applied. (I covered the entire onion section with plastic wrap and blue cohesive tape.)

I hope you never need this remedy, but do not underestimate the healing in an onion! :)

Turmeric has controlled almost all of my health issues! I am amazed! It was given to me by a relative when I fell on the ice, to prevent swelling and inflammation in my injured knee, and while it appeared to make a difference (I continued to be able to walk, and the pain and swelling abated quickly) the most wonderful thing that emerged was that I realized about a week later that the my whole sinus/allergy issue was clearing up. I had been taking at least one Zyrtec and often either more Zyrtec or other sinus medication every day for over 18 years to keep the ever-lurking migraine away. I could not have gone more than 24 hours without taking the Zyrtec or a headache would start creeping up and my sinuses would begin to swell shut. First I saw, after taking turmeric for about a week, that I did not need any "back-up" medication, then I tried missing a Zyrtec, and to my complete amazement, I felt GREAT! No headaches! I can breathe! I cannot believe it.

I take at least a heaping teaspoon of turmeric (from the spice section of the grocery, although I am looking for it in bulk now) stirred in water as soon as I get up, and one in the evening. If I begin to feel any swelling during the day, such as when I am exposed to household dust, I take another teaspoon right away, and it eliminates the "headache creep". I stay ahead of the allergies this way, but if I cannot get turmeric when the swelling starts, and it begins to cause headaches, when I can get to the turmeric, I may have to take several teaspoon doses before it alleviates, leaving a half-hour or so before I take each additional dose, but IT WORKS! It has ALWAYS EVENTUALLY WORKED. I have not had to take more than three additional doses to stop what used to be RAGING migraines, causing me to have to go to bed and be debilitated for hours afterward.

I feel marvelous, but the additional benefits have been that I realize that my arthritis in my knees is all but gone! I can walk up stairs most of the time without noticing any discomfort at all!

Finally, most astonishingly, I (and everyone I know who has begun to take this) have begun to LOSE WEIGHT! I determined after a bout of intestinal virus to eat less food at a time. (After all, I had not been able to eat anything for 3 days, so this was a good time to break a habit) This was just before I started taking turmeric. With the addition of the turmeric, I feel, I was able to eat less. Nothing else has ever made a difference in my being able to eat less and not feel ravenous and deprived. In just over 3 months, I have lost 48 pounds!!!! And I feel energetic, fabulous, lively and alert! I cannot say what actual physical role turmeric plays as a weight loss aid, but I don't care. I am 53 years old and feel better than I have in YEARS!

I have begun to try turmeric on everything that occurs. I got a spider bite and it began to itch and sting immediately. I washed it right away and put a band-aid with moistened turmeric on it and in minutes, the pain and itch left, no sign of any bite. My family jokes that I would try to revive the dead by sprinkling some turmeric on them, but I cannot believe what a difference just taking turmeric has made with me.

Thanks for your post, I will try it this way,, I tried in on occasion and just a sprinkle on my food..now I will try the spoon..i had surgery a year ago and now phlegm and face swelling had been occurring...thanks again.

Turmeric helped shrink a terrible bone bruise on my shin. I started taking turmeric to help my joints -- I'm not sure it is helping with that yet -- but it has helped shrink and reduce the swelling of the worst bruise. On the day before Father's day this year, my horse slipped in a creek, landed on my leg and then stood up on my leg! Ouch! Nothing was broken and after a few weeks most of the black and blue color disappeared from my foot and leg. All around my lower shin bone there was tenderness and a hard swelling (about 3 inches in diameter all around the damaged area) and this has persisted until the last few weeks when I upped my turmeric intake. The hard swelling has almost disappeared and the tenderness has decreased also. I have been taking three 500mg capsules twice a day for about two weeks now.