Essential Natural Remedies and Home Treatment for a Concussion 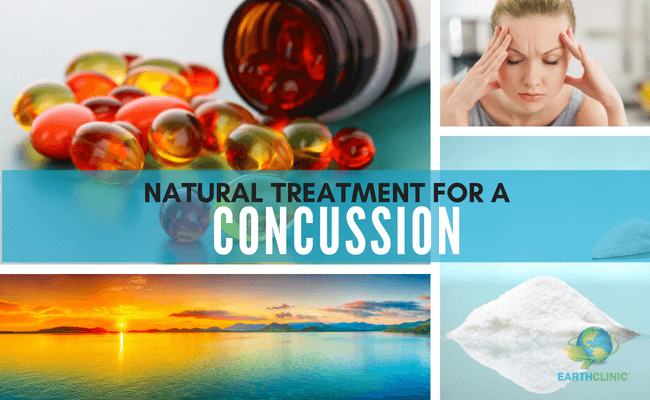 A concussion, also known as a Mild Traumatic Brain Injury (MTBI), is caused by a bump, jolt or blow to the head. Millions of concussions occur worldwide each year from car accidents, sports injuries, falls, or by accidentally banging one's head into an automobile trunk. Not only are athletes at risk for multiple blows to the head from sports like wrestling, hockey, soccer, football, cheerleading, and gymnastics, but a new 2018 study now points to traumatic brain injury in hundreds of thousands of US troops from repeated trauma to the brain caused by explosions while training on weapons. 1

Natural treatment for a concussion focuses on promoting recovery through well-documented supplements like Magnesium and Omega 3 Fish Oil, getting adequate rest in a stress-free environment, and making sure not to overstimulate the brain during the healing process. Calming essential oils like lavender oil are also used as a natural aid and to help ease the depression and anxiety that can often follow a brain injury.

After a concussion, there is a secondary injury to the body that immediately follows, consisting of heightened damage by oxygen radicals and a highly acidic pH, which leads to the release of iron and production of more oxygen radicals. An increase in these oxygen free radicals has been observed in studies sometimes minutes within the primary injury.  At the same time, there is a dramatic increase in inflammation and excitotoxicity in the brain after a brain trauma. 2

Omega 3 fish oil is one of the most important of supplements to administer following a traumatic brain injury. According to one animal study in The Journal of Neurosurgery, Dr. Julian Bailes and Dr. Barry Sears found that supplementing with fish oil containing EPA/DHA fo 30 days after head injuries reduced inflammation in the observed tissues.

“One implication of the study is that concussions, such as those that occur in football, may be best treated with immediate high-dose fish oil supplementation to reduce brain inflammation. The same may hold true of all brain trauma patients,” Dr Sears said. 3

A dosage of approximately 1 tablespoon (15 grams) of high-purity fish oil every day for one month was found to be beneficial for many of Dr. Sears patients with concussions.

Best Forms of Magnesium for Concussions

Magnesium is an essential supplement for Post-Concussion Syndrome recovery. Studies have shown that magnesium levels in the brain fall approximately 50% within hours of a traumatic brain injury and remain low for at least 3-5 days before returning to normal levels.

When magnesium levels are decreased after a head trauma, cells are less capable of providing enough energy to restore and repair, which may result in cellular death. 4 This severe decrease in magnesium was most likely due to enhanced glucose metabolism by glycolysis and/or urinary losses. 5

It is believed that excessive calcium entry into the cells is the biggest threat to brain damage, as the calcium excess ultimately leads to increased free radicals, proteolysis, initiation of apoptosis, and inflammation.

Magnesium is a calcium channel blocker and helps to control intracellular calcium activity. Magnesium also increases cardiac output and cerebral blood flow, aiding in recovery from injury. It is therefore advised that magnesium supplementation begin as soon as possible following a brain injury.

According to one study, restoring the brain magnesium levels with Magnesium L-Threonate, a permeable magnesium salt, immediately after injury improves outcome. 6  Magnesium Threonate is one of the most bioavailable forms of magnesium and used by many naturopaths specifically for improving magnesium levels in the brain.

Dosage: 1 to 3 capsules can be taken daily. The body will be able to tolerate higher doses of magnesium than usual following a concussion. However, note that magnesium can cause loose stools, so start this supplementation slowly with just 1 capsule for the first day or two.

Magnesium Oil, which is very simply an oil made by adding water, witch hazel, or vodka to magnesium chloride flakes, is beneficial for traumatic brain injuries. Studies have shown that Magnesium Chloride improved behavioral and neurochemical outcome in several models of experimental brain injury. 7

Magnesium oil is sold in most health food stores and online and may be used in addition to Magnesium L-Threonate since it is quickly absorbed by the body.

Epsom Salt is a magnesium sulfate mineral compound. Epsom Salt Baths are an additional helpful way to restore magnesium levels to the body after a concussion, especially when used in conjunction with magnesium supplements and magnesium oil.

For post-concussive care, add 2 cups of epsom salts to a warm bath. Stir the bottom of the tub vigorously to make sure the crystals are fully dissolved.

Important! Make sure to fill the bathtub with enough water to fully submerge your torso, arms and legs. A 30 minute soak time is ideal.

A 2008 study reported that patients who were given a magnesium sulfate injection within 12 hours after a closed head injury displayed less brain swelling and lower mortality than patients not given magnesium. Magnesium sulfate is only obtainable with a doctor's prescription and therefore is not the best choice of magnesium for home treatment. 8

Recent studies have begun to support the vitamins E and C in reducing neuropathology and cognitive deficits following a brain trauma. 9  An additional study suggests that antioxidant reserves of Vitamin C are severely compromised after a brain trauma due to oxidative stress. 10

1 400iu capsule of Vitamin E per day. Less for children. Note: get doctor's approval before taking this because at high doses, vitamin E can increase bleeding.

Curcumin, one of the phytochemicals in the spice turmeric, has been shown in animal studies to reduce swelling, pain and oxidative brain injury. 11 Studies have also shown that curcumin can help depression, a common side effect from concussions.

Resveratrol, a plant compound found in red wine, has been shown to help recovery from concussions by increasing cerebral blood flow and reducing inflammation. Resveratrol is often used after a concussion as its potent antioxidant properties can decrease the amount of brain damage and cognitive decline. 12

The dose of Resveratrol is 500mg. capsule once a day for 30 days following a brain injury.

Melatonin, a hormone secreted by the pineal gland in the brain, is a safe and well-tolerated supplement with useful properties following a traumatic brain injury. Melatonin has been shown to have antioxidative, neuroprotective, and anti-inflammatory properties. Multiple studies have shown that melatonin helps improve mood, decrease brain edema, decrease intracranial pressure and reduce inflammation by increasing superoxide dismutase and glutathione peroxidase. 13

Dosage varies, but 3 mg. for youths and up to 10 mg. for adults per day of sublingual melatonin for 28 days to treat post-concussion syndrome has been mentioned.

Using essential oils that promote circulation such as frankincense oil can aid in the healing process of head injuries. Frankincense can increase the oxygenation of the blood going to the brain. Lavender oil can also be helpful in treating headaches, anxiety and depression following a concussion.

Treatment:  Add 5 drops of organic frankincense or lavender oil to a diffuser. Replenish oil when the scent has dissipated.

Home Treatment for a Concussion

1. Rest & Relaxation in a Peaceful Environment

After a traumatic brain injury, it is vitally important to give the brain a chance to recover by resting and relaxing in a quiet, darkened, and serene environment. Anything that  causes emotional stress response, such as a loud television, jarring music, or conversation should be avoided for a few days.

It helps greatly if family members looking after an individual with a concussion be patient, kind, extraordinarily gentle and soft spoken.

If music is played, classical music from composers like Bach and Mozart is often touted as being extremely healing to the brain.

What are the Symptoms of a Concussion?

Concussion symptoms can appear at any time, from immediately following the injury to several days after the injury. Symptoms can include one or more of the following:

When To Seek Urgent Medical Care for A Concussion

Get medical help immediately if any of the following symptoms occur following a concussion:

How Does A Concussion Get Diagnosed?

Since confusion is often the key sign of a concussion, those with suspected brain injuries are asked simple questions such as: What is Your Name? What Month is it? Where Are We Now? Is It Before or After Lunch?

Did you try one of these remedies or have another remedy to suggest?  Please let us know!

Deirdre Layne is founder and owner of Earth Clinic and has studied natural remedies, movement arts, and alternative healing modalities for over 25 years.

After two cement blocks fell on my head I became disoriented and very confused and it felt like my heart was also in shock from the trauma so I used a combination of essential oils like 2 drops of peppermint oil under the tongue along a supplement which has a proprietary blend of Black Cumin, Heart Harmony, Immune Harmony, Present Moment and Sore to Soar. Also immediately sprayed liquid Magnesium on the site of the injury which luckily was not an open would but a egg sized bump on the top of my head and also sprayed the Magnesium on my heart and neck.

I then rubbed Orange oil into my palms and took a big whiff of that to send it directly to the brain. Also took 1000 msg of Lypo-Spheric Vitamin C which also has 1000 mg. Essential Phospholipids it in AM and again at night, plus Lipo-Spheric B Complex Plus which contains All the B Vitamins, Minerals and Cinnamon in AM and before bed.

Recovering well and keeping quiet with lots of sleep to allow for healing. Important not to be alone and to ask someone to keep an eye on you with this injury in case of further complications which thankfully I did not experience. In fact, I healed in record time with just a slight headache during the first two days. I thank God for these wonderful natural healing modalities!

I had a really bad concussion for two years from a motorcycle accident that I could not clear. The first year I was like a dementia patient and couldn't function. I was unable to work drive or cope and I tried many things.

I can guarantee the only thing that did work was water fasting causing the body to go into Autophagy. Making the body do nothing but heal itself.

I joined water fasting on Fb and watched the water fasting on YouTube of the guy who healed his back in 5 days and researched all vids on autophagy. I did an 11 day water fast of nothing but water and the change was mind blowing!!!

First three days were hard but it got easier. I broke as it was an anniversary.

Honestly, the fog lifted my memory returned, I could spell again and read...

I have done a couple of smaller fasts but my autophagy doesn't kick in till 3-5 days. It's an amazing way to heal brain damage. But do lots of research, it is safe to do. But it's a mind battle. Just think of it as a vacation and food will always be there. I needed to get my life back! Water fasting for healing the body works!

I have post concussion syndrome from a car accident 7months ago. I am taking Omega-3, tumeric, cinnamon, B vitamins, etc. Did you take any medication while on your water fast? Thank you for your feedback.