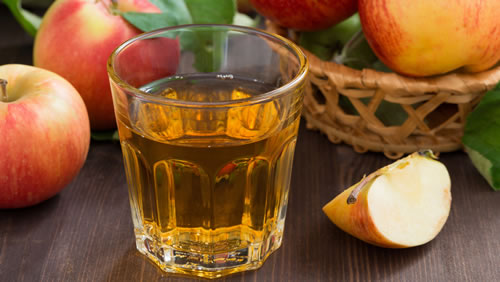 Apple cider vinegar is an excellent natural remedy for food poisoning. Moreover, this simple and inexpensive remedy is often at hand in the cupboard or available in stores everywhere.

How Much Apple Cider Vinegar Should I Take for Food Poisoning?

Apple cider vinegar can be added to warm or cool water or juice, depending on what sounds the most appealing to you. It can be taken quickly, or sipped slowly.

Watch Earth Clinic's YouTube Video to learn how we have used ACV for over twenty years to cure food poisoning.

What Kind of Apple Cider Vinegar Should I Take for Food Poisoning?

What Should I Expect After I Take Apple Cider Vinegar?

Relief from vomiting, diarrhea and cramping is usually experienced quickly, sometimes even in a few minutes. Other times, it may take 30 minutes to begin feeling better. If after 30-60 minutes, relief has not been experienced, you can repeat the dose.

It is not uncommon to vomit after taking the apple cider vinegar. (This may be more likely if the vinegar is taken quickly.) Usually after vomiting, a person feels much better.

What if I Don't Actually Have Food Poisoning?

If you are vomiting because of an intestinal blockage, apple cider vinegar will not help. If you are having continuous vomiting and natural remedies are not helping, you should seek medical help to rule out a more serious condition and make sure that you are not dehydrated, which can become dangerous quickly.

Have you tried apple cider vinegar for food poisoning? We would love to hear from you! Continue on to read reviews from our readers who reported incredible results using ACV.

For 2 days, I had a case of food poisoning and the symptoms were bloated stomach, stomach cramps, chills, fever, and the runs every 10 minutes. I stayed hydrated by drinking water with salt, potassium, magnesium. My appetite was non existent due to the bloated stomach, and I was dead tired from not being able to absorb any food nutrients.

My stomach sounded like a battlefield with loud booms going off every few minutes.

I couldn't sleep because of the discomfort, and it was about midnight when I desperately googled for something, anything, to feel better. Read about ACV here, and I took 2 tablespoons and went to sleep.

The next morning, fever was gone, bloated stomach gone, and my head felt clear again. My appetite came back and I could eat again.

Maybe I was at the tail end of the illness, or maybe ACV did the trick!

Thank you thank you thank you! This was the first day of my grandchildren's three-day visit, and this saved the visit. Food poisoning is normally a 24-hour ordeal. I took a shot of ACV with the mother, had no more symptoms other than feeling bad (not even queasy), and ten minutes later, I was able to take a nap.

Notes: 1. I got it from oatmeal that tasted funny, but I ate it for breakfast anyway a day after making it and leaving it out on the counter. So I knew for certain the cause. 2. I took the ACV within 2 and a half hours of exposure, about 1/2 hour after the first tossing of the cookies.

Agreed, apple cider vinegar is the best remedy for food poisoning. I used it several times in the past year after getting queasy after eating out and scores of times over the past decade. It might not have been food poisoning but a gall bladder attack from too much rich food, and ACV is famous for helping that too. I only take it straight if I am not too nauseous.. But if I am, then I dilute it in apple juice to make it more palatable.

Are you skeptical? I was, too. Had horrible vomiting, diarrhea, and cramps for days. It was really bad — especially the diarrhea. I could do nothing but lie in bed for days and make repeated trips to the bathroom. I went to the ER at three AM because I couldn't keep anything down. They said it was food poisoning and to just let it run its course. As much as I hate apple cider vinegar, I decided to try it after my mom read all the pages of these reviews to me. I took it straight, diluted in a little water. I gagged, but the vomiting immediately stopped. My diarrhea then stopped being involuntary after a little while—it was just diarrhea when I needed to go, then hardened back up after a few days. This remedy WORKS. If you're skeptical, believe me, I was too. I tried a ton of things like activated charcoal and all these different teas but they didn't help. ACV did. I wanted to post this review to all those skeptics out there wondering if this really works. Well, it worked for me (a teenage girl) and I'm as skeptical as they come. There is hope — just try it.

I ate old cake a few hours ago. As soon as it digested, I described it as little bacteria people chomping on my intestines, so instinct told me to drink apple cider vinegar and I had instant relief.

I ate some chicken that had stayed out too long. The next morning I had a head ache, dizziness, and later nausea. I felt tired and laid down for several hours. I suffered the day then in the early evening, I found this site on the internet. I tried two spoonfuls of ACV to a half glass of water. It didn't work immediately. so after a few minutes, I tried 4 spoons to a half glass of water. I was expecting to vomit right away. After sitting down for a few minutes I decided to walk around. That helped and I vomited a second time. After that, the head ache, nausea, and dizziness subsided but did not go away, but the ACV did help within minutes.

I've found that when I have vomiting due to food poisoning, a tsp of apple cider vinegar in ginger ale stops it almost right away. Sometimes I have to take it a couple of times but it works amazingly.

Two years ago, I had a lobster roll in a restaurant and within 3 hours I was feeling miserable with cramping and later with the runs. I consulted this site and took the dosage of 2 tablespoons in a glass of water and I couldn't believe how quickly I felt better. I've had very few bouts of the flu over my life-time and, not knowing this cure, suffered thru it for many hours before relief finally came, so I feel very sure that the ACV is what helped me because of the immediate relief I had with it from food poisoning. ACV helps me anytime I have an upset stomach. Of course, I take much less of a dose when I have a less of an episode.

I had food poisoning twice, the first time didn't know what to do so of course I went to the hospital and got hit up with a $3000 bill.

The second time I got food poisoning and I actually thought about that $3000 bill and Google remedies for food poisoning. And there it was, the #1 remedy Apple Cider Vinegar, I was experiencing diarrhea, vomiting while in excruciating pain. I didn't know how much cider to take I was in so much pain I just took the bottle and took a couple of swigs. Within three seconds I was really vomiting but, I felt so much better... I had to repeat that process two more times. But from that point on I knew that I was being cured of my food poisoning without a $3000 bill. I am a nutritionist and in my defense the first time I had food poisoning and I was out of town and didn't have my arsenal that I do at home. It really works!

The Apple Cider Vinegar cure for food poisoning works wonders! With in 30 minutes my sickness was gone; at least it felt that way, No more vomiting nor diarrhea.

I was in the early stages of food poisoning--extreme nausea, hot and cold sweats, salivating mouth--and just before I was ready to vomit I drank a full glass of water with two tablespoons Apple Cider Vinegar. The drink stopped the symptoms in their tracks. I only wish I had known of this cure years before.

Just tried your ACV diluted with water! OMG!! It worked for my food poisoning. I ate dinner and within 2 hours I had bad stomach ache pains and throwing up. So miserable until I tried this!!! I'm sharing this with everyone now! Thank you!!!!

4 hours after eating, I had sudden nausea and cramping. Upon finding this website, I took a shot glass full of ACV and was relieved of the contents of my stomach about 10 minutes later. Feeling much better now. Thanks to ACV!

2 Tbspoon Organic ACV as soon as you feel trouble in tummy from food poisoning than another teaspoon 3-4 hours later should do the trick. I get frequent problems with food (I travel a lot) so I must eat out a lot and I carry a bottle with me where ever I go now. I also carry cloves, comes in very handy as a mouth freshener after eating meals. Fresh cilantro also is good towards killing food poisoning bacteria but you have to eat a good handful of this herb.

Ensure your food is cooked.

So there I was made some AHI Tuna first time and had it marinating for two days in the fridge or it in the grill for 2 1/2 minutes on each side and then after I ate some of it not even an hour later it hit me like brick. I started looking online for symptoms and found this site still going through the motions, instead of 2-3 teaspoons of apple cider vinegar I took it like Will Smith did on Hitched saying come on work already.

I started to get food poisoning symptoms about 2 hours after eating at a restaurant last night. Stomach cramps and nausea. I found your remedy for apple cider vinegar and drank about 2 teaspoons straight right away. Felt better 10 minutes later, thank God. In the middle of the night, I felt the symptoms returning, but mild and drank a small glass of apple cider vinegar in water. Again the symptoms stopped in 10 minutes. Today I drank from my sports bottle a more diluted solution all day. Back to normal plus I feel very energized.