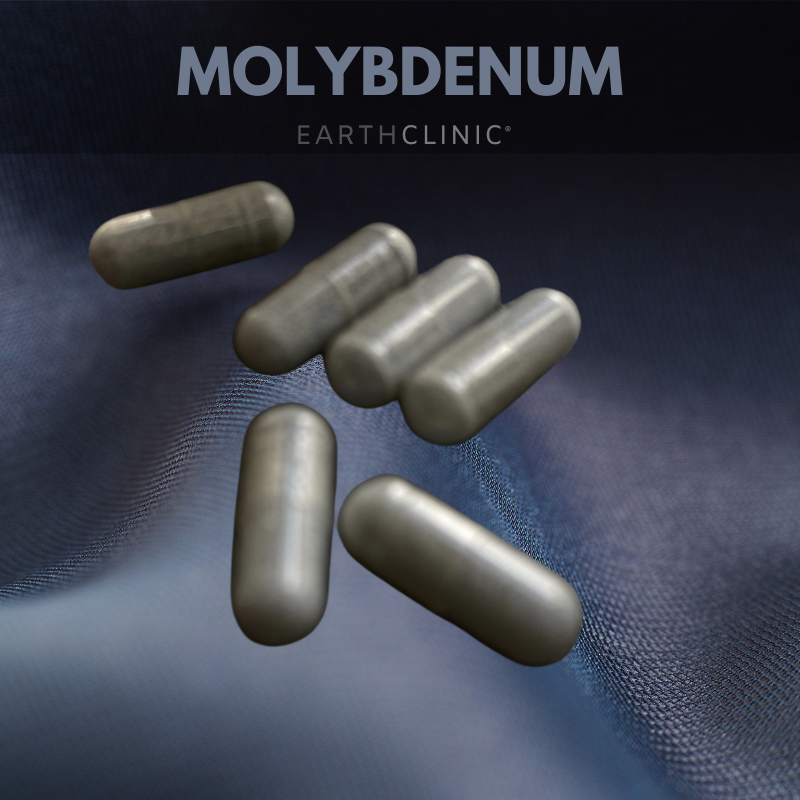 Over the years, Earth Clinic contributors, including the famous Ted from Bangkok, have repeatedly mentioned molybdenum as an important supplement to add to one's health regimen. Without this essential mineral, sulfites and toxins can quickly build up in your body.

Molybdenum is an important and essential trace mineral in your body.

You obtain molybdenum in your diet when you eat food that has been grown in soil where the mineral is present. It is found in foods such as grains, legumes, nuts, leafy vegetables, organ meats, and dairy.

It is estimated that a typical US adult's diet supplies 120 mcg/day to 210 mcg/day. However, studies have shown that your body doesn't always absorb it well from certain foods, such as soy. (1)

Because it is difficult to know how much molybdenum you are consuming through your diet and if your body is properly absorbing it, people take supplements to ensure they are getting enough of this trace mineral.

Molybdenum for Nausea and Vomiting

One Earth Clinic reader writes about how this mineral stopped nausea and vomiting from stomach bugs on several occasions.

"In early 2016, I noticed an inverse correlation between regional diets high in molybdenum-containing foods and morning sickness. While I was writing up a medical hypothesis about the morning sickness issue, my sister tried molybdenum glycinate for a stomach bug. She discovered that when taken before the vomiting had gotten underway, molybdenum was extraordinarily effective at doing away with nausea and vomiting (the other symptoms remained, including intestinal distress and some diarrhea). Two other families that I know of have since used it when a stomach bug/virus hit their home, and it is effective at ending nausea. Not just alleviating it. The vomiting is gone.

We've been using the molybdenum glycinate (molybdenum chelated to glycine) powdered supplement because it's easy to open the capsule and stir the powder into beverages. 500 mcg seems to be enough for a regular adult (less for children, of course). We don't take it chronically, just when a stomach bug comes around.

Someone should test molybdenum for motion sickness. Also, based on what a friend reported to me, it might help relieve chemotherapy-caused nausea." (2)

Molybdenum for Food and Chemical Sensitivities

Bill Thompson, author of Candida: Killing So Sweetly, suggests molybdenum to a reader with food and chemical sensitivities in this post on Earth Clinic:

"Ted from Bangkok usually advises taking 10 mg to 25 mg of sodium molybdate daily for two weeks only and with a week's rest after the two weeks. But Sodium Molybdate is difficult to source. So I would simply advise taking the molybdenum from health stores at the maximum RDA dosage of 900 mcg three times a day, every day.

Although molybdenum or sodium molybdate has the same low toxicity level as ordinary table salt, molybdenum does tend to deplete copper from the body.

Molybdenum removes poisons like aldehydes and alcohols from the body. Taking a copper supplement also tends to deplete zinc which is essential for the immune system. So if you take copper supplements, you should also take zinc at different times as well..." (3)

The famous contributor Ted from Bangkok, Thailand, wrote about molybdenum for many conditions, including pH balancing and controlling blood sugar. Rather than take the supplement daily,  as many people do, Ted thought it was only needed a few times a month.

Ted from Bangkok writes: "in reply to Mary Ann, 'I have had a tightness in my throat, my back teeth are hurting, and I have shortness of breath.' ... This is also a sign of molybdenum deficiency. Usually taken 50 mg. in one day for the entire month one dose will do it, or taken once every two weeks. However, you need not take this too much.

The one thing unique about molybdenum is that it controls pH balance and will cause the body to be within the normal range of alkalization by controlling sugar, which is acid-forming.

The other unique thing about molybdenum that I found out is its tendency to cause the urinary ORP to be in the negative millivolt region, which means it causes the body to be anti-oxidating rather than oxidizing.

For example, if I take baking soda and citric acid, my urinary pH goes to 6.2, but with molybdenum, it went up to 6.7. And if my normal urinary ORP is -70 millivolt (weakly antioxidation), it causes urinary ORP to about -120 millivolt, which is more strongly antioxidation. This is a well-known fact, but I give you an illustration of why sometimes molybdenum is important. Molybdenum also helps balance out the copper and zinc ratios too." (4)

"Remedies for brain fog is a long one, but to keep it really short, alkalizing is the basic as alkalization dilates the capillaries, which includes the brain.

Certain infections, yeast, candida can initiate a brain fog, too, as much as mycoplasma, mycobacterium, and other microbial overloads. The one interesting aspect of alkalization is these microorganisms don't survive well in alkaline and high oxygen environments.

There are certain other supplements that have high antifungals (which causes brain fogs), and heavy metal accumulation can also lead to brain fog (when you take antibiotics, heavy metal accumulates), and even in the event of vaccination (mycoplasma they are living, exist causing brain fog, but also the mercury and the aluminum they added). Therefore, molybdenum and boron (from borax) have antifungal properties too.

Molybdenum is a well-known antioxidant, at least for me, which exists in superoxide dismutase along with copper and zinc also.

... I used it myself to help with a night vision problem, along with vitamin A when taking them, but I don't take it that frequently, just on an as-needed basis. Molybdenum can also help with brain fog due to its anti-candida properties." (5)

Molybdenum for Gum and Teeth Health

Ted believed a molybdenum deficiency might be the actual cause of cavities and included it as an ingredient in his DIY toothpaste formula.

"A sodium molybdate helps teeth demineralization, and it works similarly as a fluoride, without the toxicity as sodium molybdate, molybdenum is a required mineral for human health anyway. Also interesting is molybdenum might prevent candida and MRSA of the mouth too, but MRSA, at least here in Thailand, is virtually unknown and is not as widespread as in the UK that I am aware of. An MRSA can cause teeth and bone loss might actually be a molybdenum deficiency, but I can't prove that. What I know for sure is frequent cavities can be a molybdenum deficiency as opposed to a nonexistent "fluoride deficiency" that didn't do much help anyway. On top of all these, I may also add 1/16 teaspoon of borax to drive out the fluoride from fluoridated water that may cause mottled teeth from excess fluoridation." (6)

Here's another interesting post from Ted: "Most people with serious cavities are deficient in molybdenum. The molybdenum I choose is sodium molybdate, and I put a small pinch kept in the mouth or make my own toothpaste with 0.1 to 0.5% sodium molybdate. The fluoride never reduces it and makes bones much worse. Consuming that a pinch a day for a month is generally all you need of that..." (7)

People who have a strong reaction to sulfites take molybdenum to avoid side effects. Molybdenum helps break down dangerous sulfites in the body.

Sulfites occur naturally in foods and are sometimes added as a preservative, such as in red wine. High levels of sulfites can trigger allergic reactions, including diarrhea, acne, cysts, or even breathing difficulties.

One Earth Clinic reader writes about molybdenum, along with bamboo extract, which is high in silica, successfully treating his 40-year excessive sweating issue.

James Wallace (Seattle) on 05/21/2020: "I had hyperhidrosis from the age of 16 to the age of 56. While my hyperhidrosis was embarrassing, I had the kind that is a symptom of chronic fatigue syndrome. This kind makes you sweat, but the sweat has no scent.

Molybdenum is a very inexpensive mineral. You can find it in many health food stores and online. Here are some examples from Amazon.

Here is an example of the Sodium Molybdate powder that Ted writes about in his DIY toothpaste formula. Note: This is from a chemical supply company.

Do you take molybdenum? What has it helped you with? Please send us your feedback!

I take molybdenum for liver detoxing. I take one capsule in the evening. It removes toxic substances from the liver. Great supplement.

My wife has had trouble with nausea all of her life. We take lots of supplements and they make her sick. Every time she eats a meal she has a bout with nausea. Sometimes the alcohol trick or mint or charcoal works to relieve nausea and sometimes not.

She started 150 mcg of molybdenum once a day and after about a month of this, the nausea is just about gone.

We learned this trick right here on EC.

Molybdenum glycinate can even help with norovirus-type GI illnesses. :) And it helps a lot of people with migraines.

Molybdenum is also very helpful at removing sulfur dioxide, found in processed foods, from the body.