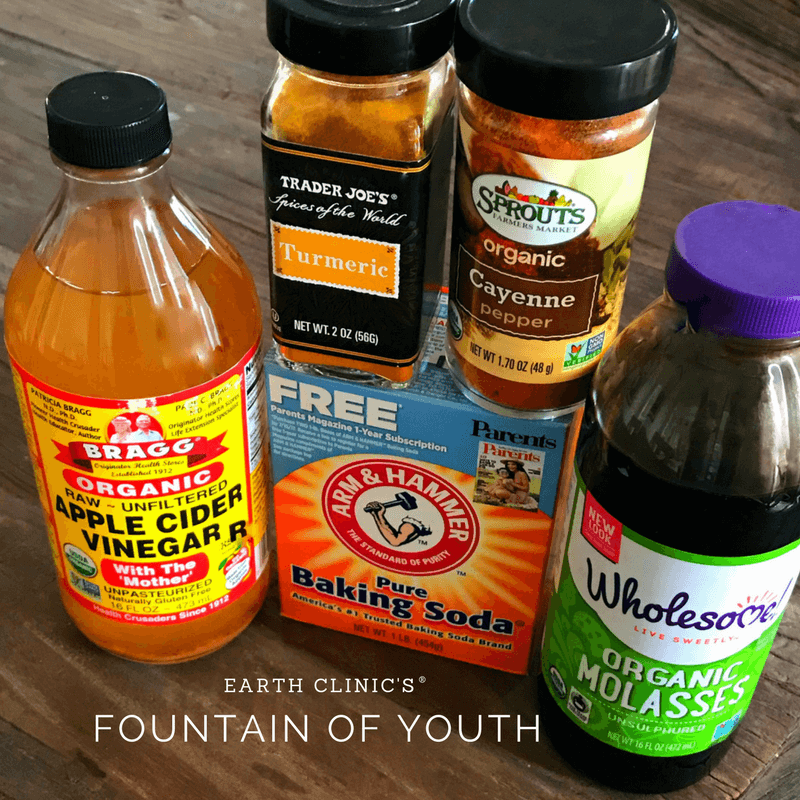 What happens when you combine three of Earth Clinic's most popular remedies for health? It should be no surprise that the resulting tonic (first created in 2004) benefits many body systems, including the largest organ, the skin. And when the skin and multiple body systems get needed nutrients, improved skin tone and energy result.

The critical ingredients in the Fountain of Youth Tonic are apple cider vinegar, blackstrap molasses, and baking soda.

Common baking soda, also known as sodium bicarbonate, contains essential elements hydrogen, sodium and carbon. It helps to alkalize the body and provide bicarbonates to the system. Baking soda is used as a simple remedy for heartburn, gout and body odor.

This tonic is great taken a couple of hours before bed to promote a restful and deep sleep.

If it suits, try it in the morning or as an afternoon pick-me-up!

1/2 teaspoon turmeric is especially helpful in the case of boils, acne, infection or any type of inflammation.

A few shakes of cayenne pepper is an excellent remedy for reducing mucous, increasing energy, and lowering blood pressure.

Finally, water is not an unimportant part part of the tonic. Even mild dehydration can cause poor skin tone, constipation, and low energy. Keeping up with water intake will help the skin cells to maintain hydration, lessening the appearance of wrinkles. Water helps to flush out toxins and keep digestion moving along, another critical component of excellent health.

Please send us your feedback if you try our Fountain of Youth recipe! Keep reading below to see what what our readers had to say and their unique variations to the recipe.

I drink the Apple Cider Vinegar and baking soda tonic drink for stiff joints, especially knees and wrists. Works. Yep, add cayenne too AT TIMES. I have also noticed that it improves circulation and friends comment that I look younger! I will try adding a small amount of blackstrap molasses and see what happens.

APPLE CIDER WORKS! I have been suffering from Plantar Fascitis and heel spurs since march of this year (2017), I have visited many doctors, purchased all kinds of orthotic devices, braces, anti-inflamatory medication, to no avail... UNTIL I tried the Apple cider vinegar. I have been drinking for the last three days a tbsp of apple cider, a tspn of baking soda, a tbspn of molasses in a small cup of water, three times a day.

I have also wrapped my foot with a small towel soaked in apple cider and I covered it with a plastic bag before going to bed. Last night was the third night that I applied the apple cider to my foot and I am ecstatic! THE PAIN IS GONE!!!! I CANNOT BELIEVE IT! I am soooo grateful for the remedy I found in your website. APPLE CIDER DOES WORK! Thank you very much! Hurray!!!

This is not a review, but a question. Can you use Grandma's Unsulphured Molasses?

Fountain of Youth: I tried the drink, and it was lacking, it tasted like marinade sauce. so I added powder ginger, and cinnamon, and ground cloves, if you notice these are some of the same spices that are in gingerbread cookies, they compliment the Blackstrap Molasses.

I wonder what was the outcome of having this drink?

I've been trying your anti aging drink. I put 2 tablespoons of app cider vinegar, 1 teaspoon of blackstrap molasses and 1/2 teaspoon cayenne (5 shakes) in a mug and filled it half-way with hot water. I haven't tried to add turmeric, maybe next week I'll be brave enough. I've had intense sinus pressure from allergies the past week and this drink helped relieve the pressure immediately. Every time I drink it I end up spitting out some mucous even though I have no sinus congestion. I've noticed it has also regulated me. Right now I am doing just one mug in the late afternoon.

Acne control, Appetite Suppress, Energy Drink For the above mentioned conditions, I must say I started using the Organic Apple Cider Vinegar and Unsulphured Black Strap Molasses about 4 months ago which I purchased from the Health Food Store. I must say that I noticed a difference in a weeks time. I did not feel sluggish or fatigue anymore and I started getting the compliment of how clear my skin appeared and I noticed that my Menstruation cylcle bleed, less, lighter and smaller blood clots.

In the beginning I used 2TBS of ACV with 2TBS BSM mixed with 8oz glass of spring water or when I ran out of the spring water I just settled for the faucet water. I enjoyed the drink so much that I then did this twic a day once in the morning and then again a bedtime.

Sometimes when I did not have the spring water, I would then take 1-2 TBS of ACV by mouth. I really prefer the mixed drink instead. Still using and will give more feedback in the futer. Good Bless!!

Thank you! I love this site, and have used ACV on my face for years. I tried Earth Clinic's recipe last night and had the best nigh'ts sleep I've had in years.

And i just took the recipe again this morning with a pinch of cinnamon (but I forgot the baking soda).

Thank you for this site, it's excellent and I have told all my friends and family about it!

Another alternative to using soy or milk in the Fountain of Youth recipe is hemp milk. I tried this a couple of nights ago and enjoyed it so much that I'd like to share it here. Hemp is high in protein and the EFAs Omega 3 and 6.

In a small pot combine and heat to warm (do not boil):
3 ounces hemp milk
3 ounces water
1 tbl molasses

Stir till molasses melts, and once mixture gets thoroughly heated, sprinkle cinnamon to taste. No extra sweetner is needed.

I've been using the fountain of youth recipe, and I like the results, but I read on the back of the ACV bottle that you should never put it in hot water- cos it disrupts the enzymes. Anyone else hear that?

I make my own ACV and yes, never heat raw vinegar. You destroy the mother, probiotics, good bacteria and enzymes that are the beneficial part of raw vinegar (Braggs)

I'm having some good results with the molasses/apple cider vinegar/baking soda combination as well as the wheat germ/brewers yeast/molasses combination. here's a suggestion for those using molasses or honey: coat the measuring spoon with olive oil prior to pouring the molasses in. this keeps the molasses (or honey) from sticking to the spoon and makes it easier to clean up. great web site, BOB.

Came across your site because I was doing research on H2O2 and was pleasantly surprised at the wealth of info; Loved the recipes especially the Fountain of Youth; the Molassas was a little too heavy for morning, so i substituted natural honey and wow, what a nice zip in the morning. I sip a few ounces of ACV during the day and before bed, the difference in how I feel and look is remarkable. Thanks

I have been suffering with heel pain for months now and have tried everything, heat, cold, wraps, Advil, etc, etc.I want you to know that I believe in Dr. and medicine so my wife made this stuff with ACV and said try this for a week once a day so I did. You would not believe this the pain was gone in 3 days. Here is what she gave me. 2 tbsp of ACV 1 tbsp molasses and 1 tsp of baking soda mix well and drink. I can walk barefooted with no pain. I think she got the recipe from this site. Thank you.

I have been on a regimen of 2 tblsp of ACV and 1 tblsp of blackstrap molasses 2x's a day for about 4 months now. I've just recently in the last month added 1/2 tsp of cayenne (1 tsp/day total) to my ACV and chase it with a glass of water. I read on your site that cayenne helps circulation and that was the primary reason I started adding it to my ACV. Before that I would cook with it and added it to my food everyday as I really like hot food. Well, I was pleasantly surprised with what happen next... The puffiness around my eyes (due to some kind of allergies food or airborne I'm guessing) and face is COMPLETELY gone! No kidding! I have a healthy glow to me now and the puffiness around my eyes that would make me look tired all the time, has vanished. The next thing I noticed is that my sinus' are clear, the dull sinus headache that I lived with for so long is gone and I can breath through my nose at night. As a result I think I'm getting more oxygen to my brain and body now and I definitely feel much more clear headed. I had no idea how much congestion was in my sinus' that I had just learned to live with. After ingesting a teaspoon a day for about a month, although results came within a couple of days, I look and feel so much better. The only thing I can attribute to the changes to is the cayenne. Thank you so much for posting this remedy. Makes me want to kiss you guys right on the lips! SMACK!