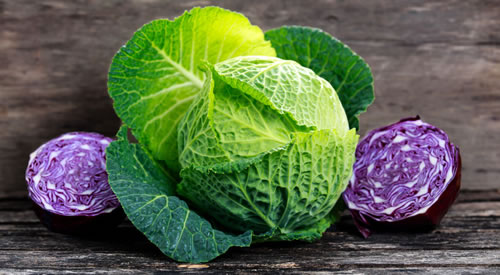 Cabbage has been used for generations as a natural remedy to reduce swelling, pain and inflammation and to draw out infections. Cabbage wraps are one of the most effective natural cures for breast infection (mastitis). Additionally, cabbage is a versatile vegetable and commonly used for digestive problems (juice) weight loss (raw) and to reduce blood pressure (raw.)

1. How to Make a Cabbage Wrap for External Use

2. How to Use A Cabbage Wrap for Pain

For joint pain or a sprain, use cabbage leaves to wrap up the affected joint or area of pain. Cover the cabbage with plastic wrap and an ace bandage or cohesive tape.

During the day, change your cabbage wrap every few hours. If you use this overnight, remove the cabbage in the morning and allow the skin to breathe a while before you apply another wrap, if needed.

3. How to Use A Cabbage Wrap for Infection

For infection, do not use the plastic wrap. Change the cabbage wrap every two hours. Watch for red streaks, increased redness and swelling or fever. If you notice any of these symptoms, get emergency advice from a health professional.

4. How to Use A Cabbage Wrap for Mastitis

For mastitis (breast infection) or breast engorgement, the cabbage leaves can be applied directly to the breast inside of the bra. As the leaves become limp, replace the leaves with fresh ones. Be careful, prolonged use of cabbage can cause the milk supply to dry up. (Making it an effective remedy to dry up your milk!)

Have you used a cabbage wrap for healing? Please send us your feedback!

Early this month, I developed a breast cyst infection severe enough that, had it not been for the July 4th holiday week, I would have headed to a doctor. The infection happened in a cyst that lies along my bra line and after reading and watching a video to learn the Allopathic treatment, I combed through Earth Clinic and decided to try self treatment. The two tools I used were cabbage leaves and Logul's Iodine.

Had I gone to a doctor, I would have been given a course of antibiotics, followed by a return visit to lance and drain the cyst. I had a house full of family coming to spend their vacations with us, so I started out by putting a cabbage leaf over the breast and wearing it in my bra. This provided complete ease through all the days of the infection and no one ever noticed it through my shirt or detected anything wrong. I thank the Lord for those leaves. Beneath the cabbage leaf, the tenderness and redness only increased daily. Things looked bad, and Mr. Iowa begged me to let him take me to the hospital. Twice a day, I was wiping the cyst with Logul's on a cotton ball, because I had read it would make it's way into the cyst, but the infection was only increasing. I finally decided to put a cotton ball soaked in Logul's onto the cyst and to wear it under the leaf inside my bra. I did that for half an hour and that was a bit too long, because it caused the upper layer of skin to peal off! Now I was really in pain…but not when I wore the cabbage leaf protection. Within hours of removing that cotton ball, the cyst turned very angry and began forming a head. 2 days later, it popped and spilled out much of the contents, but all was contained by the leaf. There was no scent of infection in it. I only knew it had popped when I went to check on it. I applied a bit of pressure and got more out, although it was too painful to squeeze out completely, as I had seen the doctor do on the video. I applied hydrogen peroxide with a cotton ball to keep the area clean and changed the leaf as needed. The healing began so quickly that I could not believe it. The wound continued to drain for a few days, and the leaf caught everything. I saw a piece of thin white tissue sticking up from it and I assumed that was part of the cyst's sack, so I pulled it off. I had plenty of fresh leaves in the refrigerator to keep the wound covered. I am healed now, and the cyst seems to be gone as well.

I have Mama to Many's castor oil cure and a heating pad here, if it should reappear. I am scolding myself for being lazy with this cyst and letting it grow again, but going through this process of rapid and successful self-treatment was deeply satisfying.

Cool cabbage leaves (applied whole leaves) inside a bra are also great for reducing pain (and milk) in breast when weaning a baby.

Boiled cabbage leaves applied to breast then covered with plastic wrap left overnight. This was done for 3 nights. This cured a postoperative hematoma. After a lumpectomy a hematoma formed, causing swelling and pain. The cabbage leaves drew the old blood through the inscision. Can cabbage leaves be used to relieve edema? Does anyone know any other remedies for edema?

Following mastectomy, have had persistent lymphedema on my side. Tried elastic bandages, no help. Read about cabbage leaves for breast engorgement, why not try it? Both conditions caused by excess fluid with nowhere to go. Put crushed cabbage leaves over the bulge, held in place with elastic bandage. Significant improvement overnight; after three nights the swelling has practically disappeared.

I had a swollen shin injury. I looked online and saw people using cabbage wrap. I try wrapping my leg in cabbage leaves, which I pound first with a mortar. I attached plastic food wrap to hold the wrap in place. I sleep with this on. My swelling is greatly reduced by the morning. Very good.