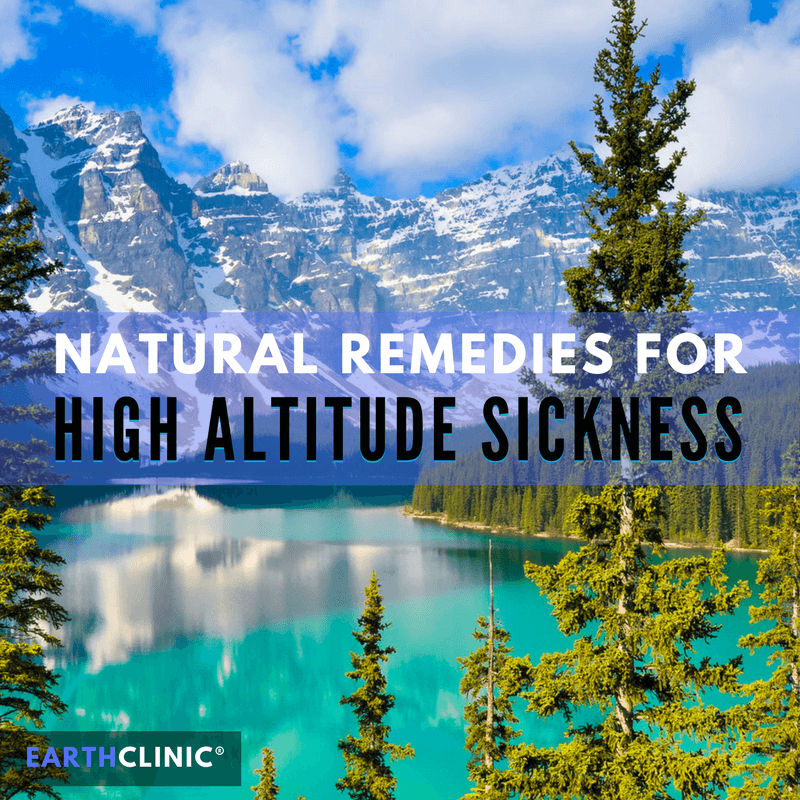 Whether a vacation to the mountains or a business trip to a place of high elevation, a benign journey may become a gloomy experience if the travel includes unexpected headache fatigue and nausea. These flu-like symptoms may not be the result of a virus but of the body's difficulty adjusting to the higher elevation and thinner air. Natural remedies for altitude sickness can be very helpful and include blackstrap molasses, vitamin e, gingko biloba, and preparing ahead of time.

Ginger root is a great herb for the circulatory system. It is especially helpful if one of the symptoms of altitude sickness is nausea. Ginger can be taken in capsules or as a tea. Candied ginger slices are delicious and a great way to get plenty of ginger.

Vitamin E is necessary for the blood to be well oxygenated. Vitamin E can thin the blood and should only be used by those on blood thinning medications with doctor's approval.

Blackstrap molasses is full of nutrients and is another natural remedy for altitude sickness. Taking 1 tablespoon twice daily. Ideally, begin taking it a week or two before a trip.

Ginkgo Biloba is a herb that dilates the blood vessels, allowing good oxygen flow throughout the body.

Staying well hydrated is important. Water or herbal tea is ideal. Coffee, sodas, and energy drinks are not good ways to get hydrated. A pinch of sea salt in a glass of water helps the body's cells to retain the water instead of having it flush through the system.

Preparing Ahead of Time

Spend a week or two "training" for a trip to the higher elevation. If health permits, try some burst training - short bursts of running, cycling, jogging, etc, to prepare the heart and lungs.

Be sure to pack remedies ahead of time - ginkgo biloba capsules, candied ginger, and blackstrap molasses.

Who Gets Acute Mountain Sickness?

Many people experience a mild form of altitude sickness when traveling through mountainous regions or staying at ski resorts. Fitness levels and overall health are not factors in determining who will get this disorder. In fact, it's virtually impossible to predict who is susceptible. Previously experiencing this disorder, however, makes individuals more prone to additional bouts.

Acute mountain sickness can be dangerous because if left unchecked, as it can progress to high altitude pulmonary edema or high altitude cerebral edema. Shortness of breath while at rest, confusion, unsteadiness, or vomiting are signs that immediate medical attention and lower elevation should be sought.

Continue reading below where you will find recommendations to deal with altitude sickness from our readers!

Do you have a natural remedy for altitude sickness? Please pass it along!

I was having altitude troubles when I first moved here to Durango CO, as well as when I would travel to sea level for business trips and come home to the higher altitude. It was hard to find natural products. I used CO-Q10 which really helped. But I also wanted something I could take that was natural those first three days home. I did research, experimented, and 10 years later just started a small business to offer natural altitude sickness relief products (sell on Amazon and local). I found canned oxygen works for quick relief when the headaches or nausea come on. I hike in 10K ft mountains so it has been a good hiking companion I also found some tablets (won't mention product name here since I want to be sensitive to Earth Clinic guidelines). I use these tablets all the time when I go hiking at higher altitudes and it has made hiking so much easier and fun. I also found a tincture that works. The tablets and tincture main ingredient that helps is ginko. There is a study (I haven't gotten a copy yet) by Dr. Peter Hackett a well know altitude expert out of Telluride, CO. This study says that it is the ginko that works. My next experiment is to actually try ginko when I get back from my next trip. I was glad to see ginko mentioned below as another point of reference.

I have used CoQ-10 (200 mg 2x day) and Ferrum Phos tissue salts (follow directions on the bottle) in combination to help combat altitude sickness. Start taking them a week before you go and keep taking the entire time you travel - they help with energy and getting more oxygen around the body.

I get terribly short of breath and bad headaches at as low as 4,000 feet but the CoQ-10/Ferrum Phos combo allowed me to go to a conference in Colorado and be perky and energetic, I was even able to take a walking tour around the town. Haven't tried it yet above 8,000', but I bet it would still help.

An old employer flew us directly from weeks at sea level to work at 10,000 feet. Major risk of altitude sickness and even embolism, so we were required to take either a commercial altitude sickness medicine or ginkgo biloba. You can imagine the choice I took.

What would be harder to foresee was the number of people who switched after a day or two from the commercial altitude sickness medicine to the ginkgo. Originally, people opted about evenly between the two options; but as the ginkgo people quickly adapted to altitude and the drug-choosers adapted more slowly and experienced more side effects, about half of them soon switched to gingko biloba as well.

This natural compound is well-regarded as being able to dilate the blood vessels and thereby improve bloodflow throughout the body, including to the brain, until the cardiovascular system can produce enough new red blood cells to address the reduced oxygen levels available at elevation. I was convinced!

I tend to suffer headaches, nausea and feel generally debilitated at high altitude, especially the first two days, but these suggestions really helped me be human and be able to hike at 8,500 ft from day 1. Some are from this site, some from internet. Best wishes to you if you're going up high and have had problems before, it's no fun to be out of it while everyone else in your party is having a good time. I did all of these things to leaving nothing to chance, and it worked!

Go all out in exercise like running or biking for several minutes most days, building up cardio vascular system. Any amount will help. I did bursts on my bike.

Ginger: liquid, tea or candy (I did tea)

Last summer I went to my brother's wedding in Crested Butte, The altitude got to me I could barely breathe. I felt like someone was on my chest the intire time. I wanted to go visit my son this past winter to ski. I heard about FOOD GRADE! Hydrogen Peroxide Thearpy. With the premise that it puts more oxygen in your blood. I tried it for two weeks before I went, and continued to use there. I was amazed by how I could breathe with ease, and Tele-ski with no problem. My son was even amazed! So read up on it and try it. It really help me. I have taken a break from it because of the strick times when you can take it. But plan to go back on soon. For example I started at 3 drops in 8oz of disstilled water three times a day on an empty stomach. Waiting 1 hour after taking it to eat, and three hours after eating to do the HP Therapy. Every day increase by one drop, till you reach 25 drops. At this time if your condition is severe you can stay at 25 drops or reduce if you can't stand the taste. Some sites say you can take with milk or juice. But if your to take it on an empty stomach I didn't use milk or juice but just disstilled water. You can also buy Oxygen tanks there to use when you need to. Hope this helps.

Sufficient levels of vitamin E, natural E and not synthetic will oxygenate the blood. Start with 200 iu daily and increase to 400. I've been on 800 for thirty years. I've been twice in last ten years to the Rockies... Above 11,000 feet camping. No headaches etc. When hiking, yes I had shortness of breath but that is expected. No chest pain, headaches... To test myself I even ran for a few minutes at the continental divide... Still no headaches. Did that when I was sixty years old.

Lloyd, 4 yrs ago I switched from the cheapest vit-e to "mixed Tocopherols" w/ noticeable results. And now the E science brings us about 4 types each from Tocotrienols and Tocopherols, and not without the high price tag. Do you not also take CoQ10 or Unbiquinol w/ your E??? That would certainly elevate the possibility for a Rocky Mountain High.

As an addendum, I have heard or read that the extreme mountain climbers of the highest elevations (like Everest) drink H2O2 Hydrogen Peroxide to boost the O levels, but many inevitably use portable medical grade oxygen gas. If I am correct, some also use Periwinkle Extract (Vinposetine) to elevate O levels. Gingko Biloba is also indicated, among other herbs. And not to forget MSM is also a natural Oxygen booster.

I go skiing a couple of times each year and in the higher resorts I suffera lot from Altitude sickness for the first two hours in the morning.

I find that drinking plenty of water over the course of the day helps alot - just keep taking sips of water regulary and this should do the trick.