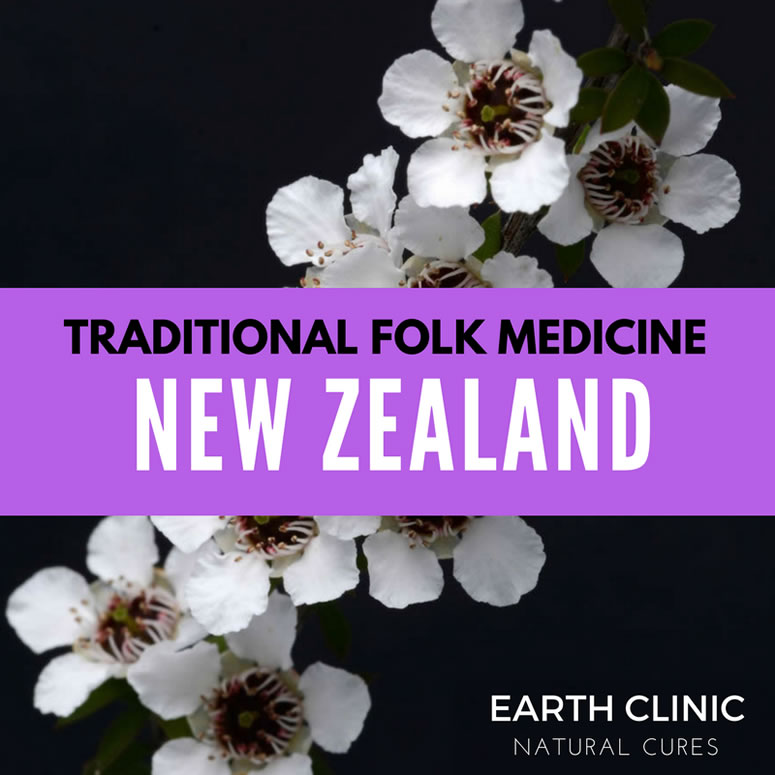 New Zealand is a beautiful part of the globe boasting mountains, lakes, shorelines, subtropical forests in addition to glaciers and volcanoes. This lovely land is a sought after backdrop for movies and television programs. But not only is New Zealand beautiful, the variety of plants that grow there have many uses, including medicinal ones. The majority of the plants that grow in New Zealand are native only to New Zealand.

With a varied landscape and unique plants, this country lends itself to natural remedies specific to its location.

Manuka honey, a highly acclaimed healing honey is produced by bees that pollinate the leptospermum scoparium plant, which is a small tree or bush, more commonly known as manuka or tea tree, which is indigenous to New Zealand.

Koromiko is an herb native that New Zealand that is used for digestive problems, dysentery, and to stop external bleeding.

The inner bark of the rimu tree has been traditionally used externally for burns, wounds and ulcers of the skin.

Continue reading to learn more traditional folk remedies reported from our readers who live in New Zealand. Make sure not to miss Michael's entertaining and informative posts!

Folk Remedies from New Zealand (new section). (N.B. Kindly note (and watch out) that the Australians will take the credit for some of these!! )

We have long had a SALVE over here which is termed a "Medicated Ointment" and its status borders on the "National Treasure" category level for many Kiwis.....If I am unable to name it, I should tell you that it contains Camphor, Menthol and Eucalyptus Oil! We use it for cuts, burns, sores, catarrh, head colds, coughs and colds, spasmodic croup, earache, headache, muscular pains, aching joints and it is great for mosquito bites too (although they don't seem to make that claim for it strangely enough). It comes in a quaint, old-fashioned tin like in the olden days.

2) If you feel a COLD/COUGH/FLU/SORE THROAT coming on, take a teaspoon of each of the following in a mug: Lemon juice (from your garden if possible), ACV (with mother/organic etc), Organic Molasses, Manuka Honey (or honey), Rum or Whisky. Put a little good quality, cold water in, mix it all up and then fill the rest of the tumbler with hot water such that you can safely drink it. As we would say Down Under "A couple of those a day should see you right mate". If you can catch this in time it sure can make a difference. Maybe you can save money by leaving the rum out of the brew if giving to the ankle biters though!

EC: Michael, yes, please tell us the name of your treasured Medicated Ointment!

3) FLAX OIL from flax grown in New Zealand claims many benefits. It is apparently one of the richest plant sources of Omega 3 and 6 essential fatty acids (EFAs). Although essential, we cannot manufacture them within our own bodies and must obtain them from dietary sources.

A sign of possible deficiency might include any of the following symptoms:chronic inflammatory disorders, brittle or soft nails, wound healing poor, dry hair/dandruff, dry or cracked skin, joint aches and pains and even weight management problems. There may be others I may have missed.

4) EMU (bird) OIL is an Australian product, strictly speaking (ouch, that one hurt! ), although in recent decades we have established emu farms in New Zealand. We had the Moa (2nd biggest bird in the World! ) but not the Ostrich or the Emu sadly. We are told that the Australian Aborigines used emu oil for lots of health benefits. It is supposed to be wonderful for Arthritis and skin issues, such that some folks swear by it. The oil is claimed to be wonderful for a huge, long list of ailments but I am not going to vouch for them by personal experience. I would appreciate member feedback on this one.

5) "VEGEMITE" is an Australian invention (ouch), which has become an icon on the menus of both Aussies and Kiwis over a generation or three. Kiwis who run out of it when travelling overseas on their "O.E."(o'seas experience), will write desperate, pleading letters home insisting that their parents or friends urgently send them extra supplies! Rather attached to it-you bet! It seems to have become ingrained into our cultures. Vegemite is a dark-brown, food paste made from left over brewers' yeast extract. It is one of the richest sources of the B Vitamins, esp.Thiamine, Riboflavin, Niacin and Folic Acid and has 2.3% Potassium. There is no Vit.B12 unless you have the "low salt" version when you are gettting extra Vit.B 6 also. The main ingredient is Yeast extract with a high content of Glutamic acid, which is what I believe gives it its distinctive flavour. There is no fat, added sugar or animal content: it does contain Gluten. Normal Vegemite has a 3.45% Sodium content which = a Salt content of approximately 8.6%!! The "low salt" version claims to offer 25% less salt. We spread it on our bread, crackers, biscuits and toast and positively yearn for the stuff. When the factory broke down in Christchurch after the earthquake, there was a gnashing & grinding of teeth and a tearing of hair until supplies were eventually restored. Whew!

EMU is my mothers favorite choice to rub around her knees. She says it moves the pain better than anything she knows. I told her she should give castor oil a try too.

Thanks sharing some history with your findings,

My 13 year old Lhasa has several fatty lipomas. She had 1 that started pea sized under her elbow. It grew to marble size in 2 months. I put Makuna honey on the skin above the tumor 2xs/day. I also let her eat some. The fatty lipoma disappeared in 5 days. I'm now treating another one...it shrunk 1/3rd of the size in 2 days. Use New Zealand Makuna honey that is at least 5+ UMF. 10+ is considered medicinal.

List of things for me or New Zealand to accomplish this coming week:

1) To-day: Venture out to buy more Borax, ACV, Molasses and Manuka Honey and any other "must haves" I am about to run out of. Pity about the rain. No-drop the honey-can't afford it. Ridiculous!

2) Saturday: Looking forward to the All Blacks beating the British and Irish Lions rugby team at Eden Park. The one with the funny shaped ball.

3) Next week: Take the Auld Mug, aka the America's Cup, back home to Auckland where it rightfully belongs. Somebody pinched it off us a while back. Can't trust anybody these days.

4) Let E.C. know that three school boys from the South Island are claiming to have found the cure for the dreaded pimple in their school lab ! They say that Manuka Oil is the new wonder cure but I "wonder" if those darned Aussies got there first (darn it! ) with their Tea Tree Oil. Ought we to tell them? We shouldn't discourage the youth: good on them for trying: I wish them well. Keep an eye out for their product coming to a store near you.

5) Help those long-suffering Americans to design a fair and equitable Health Care Plan for the Nation. They got to the Moon but are struggling with this one! Priorities?

Quite a busy week ahead I guess-better eat a sustaining breakfast and get ready. My wife is asking if I want some porridge? Should I or not? Difficult decision. I don't know.

More than 200 plants were used medicinally by MÄori. Harakeke (flax), kawakawa, rÄtÄ and koromiko had many recorded uses.

Gather round! Once there was a Maori Chief, Harehare who recited this tale of the warriors who were fighting with the Government deep in the New Zealand bush (forest) in 1871.They became very hungry when their rations ran out and, as was frequently the case with the old time Maori when food got scarce, were forced into resorting to digging and eating Fern Root when the bacon and biscuits (in this case) ran out. This fern root "aruhe" or "roi" was very starchy when pounded and was not particularly palatable and the gritty bits from the soil could grind down your teeth after too much of it but at least it could sustain life! But on a hungry, cold winter's night, deep in the mountainous bush, his frustrations overcame him and he burst forth in a memorable composition, which the Arawa Tribe made into a lively, Haka, action song.

"The leader came dancing towards his commanding officer holding out a piece of bark on which he placed a "komeke" or cake of roasted fernroot and this is the song he chanted, with his men joining in in a great chorus to appropriate action. I translate from Harehare's Song:- "Captain, captain, here is your food, A plate of fernroot! See what the Government gives us in its great, loving kindness! The Pakeha soldiers eat mutton and beef, they drink Government rum, They are safe in their redoubts. We roam the forests and climb the mountains; We measure the country with our feet; We chase Te Kooti, we chase Kereopa; We are the fighters! We are weary and hungry, And what do we get to eat? Fernroot ---fernroot! We live on Hinau berries like the birds, We live on fernroot like the pigs; We root like pigs, we pound the fernroot. We are hungry for Government meat, The food of the warrior; We dig with our bayonets For fernroot---fernroot! "

Manuka (or Red Tea Tree) is the smaller tree/shrub/bush and Kanuka (or White Tea Tree) is the much taller, tree version. The early European adventurer and sea captain, Captain James Cook pioneered the protective measures taken to prevent Scurvy (lack of Vitamin C) on the ship "Endeavour", partly by giving his crew lemon juice etc. However, when he reached New Zealand he brewed a "tea" using "Tea" tree or Manuka leaves (hence the name). He also brewed beer with it, which was nutritious as well as making you smile.

In addition, we still have Scurvy grass near some of our beaches which he forcibly fed to his crew, which also helped them resist scurvy on long voyages. You do NOT want to get scurvy!! One French voyager was loosing one man every day when he visited New Zealand in 1769 because he did not know this medical fact! His men must have died horribly.