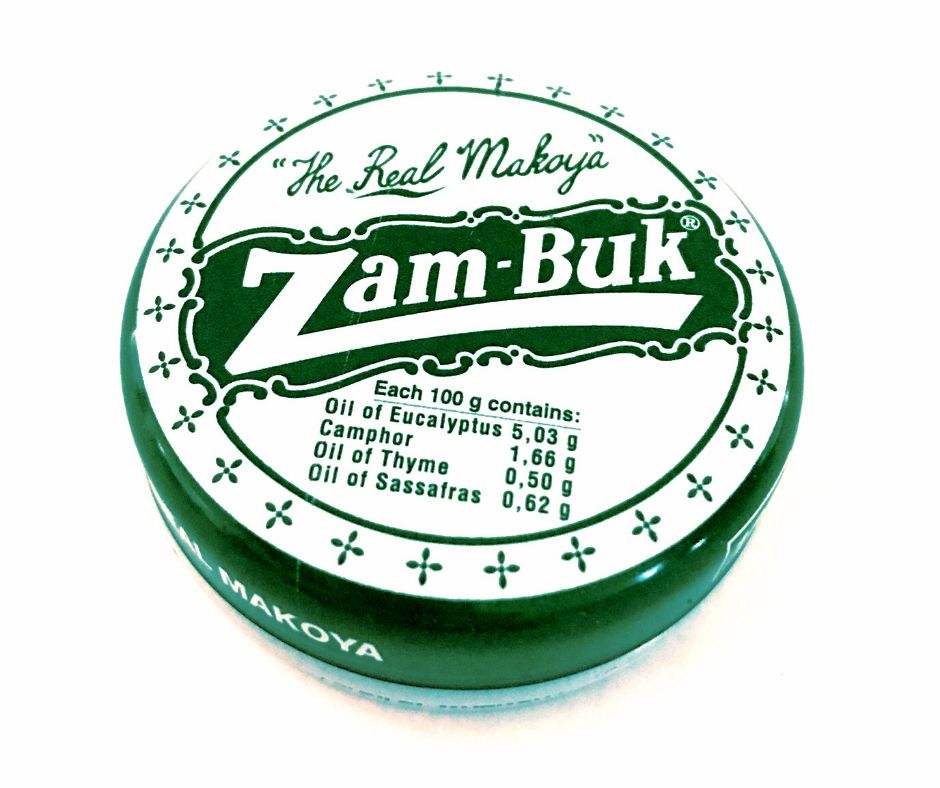 Zam-Buk is a popular and inexpensive herbal ointment found in most medicine cabinets in South Africa for over 100 years.

Earth Clinic was first introduced to this vibrant green salve last summer after getting to know members of the South African expat community here in Los Angeles.

"What's this, you've never heard of Zam-Buk?" Apparently, everyone knows about Zam-Buk, just not Americans.

Intrigued, we asked for more information and learned Zam-Buk is considered a cure-all balm in South Africa, treating everything from burns and cuts to asthma and coughs.

Zam-Buk ointment was first patented in 1902 by Charles Edward Fulford, whose Zam-Buk Company of Leeds, England, sold it as an herbal balm and antiseptic ointment. 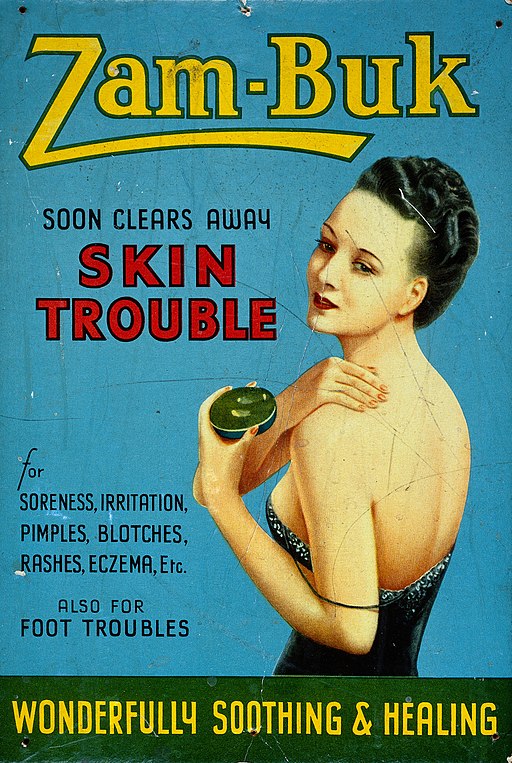 Zam-Buk was advertised throughout the early to mid part of the 20th century to be effective for a wide range of ailments, including cuts, bruises, dry and rough hands, elbows and feet, sprains, stomach ulcers, hemorrhoids (piles), colds, toothaches, and muscle pain and stiffness.

The exact source of the name is unknown but the word zambuk once commonly referred to ambulance-men and first aiders at rugby league matches in Australia and New Zealand. The  'zambuk' would race across the pitch to help an injured player. The name was eventually replaced in the 1970s, with 'trainers' and 'runners'.  ¹

However, for decades Zam-Buk was a critical healing ointment to rugby players who got cut on the field.

"The product itself was an important first-aid medicine for any cuts or abrasions of the skin. In a time long before anti-biotics, a footballer could come to permanent grief merely from scraping his knee on the ground and it becoming infected. Zam-Buk was a recognised treatment that could successfully kill germs that had entered the skin. Many of the Zam-Buk adverts used headlines such as "Do you realise the danger of a poisoned finger? Death often lurks in a cut." ¹

Today, Zam-Buk is most frequently used in South Africa to relieve itching and pain.

Zam-Buk ointment is used for the following ailments or symptoms:

Zam-Buk Ointment is composed of the following active ingredients per 100g.

Eucalyptus Oil is traditionally used to treat insect bites, burns and cuts. It is often used topically as an antiseptic to reduce the risk of infection and to stimulate healing. Additionally, eucalyptus is commonly used to relieve pain when it is rubbed into sore muscles.

Oil made from Thyme has been used for thousands of years in Mediterranean countries for a wide range of conditions, including scars and skin marks, acne, coughs, and yeast infections. Thyme oil also has potent antispasmodic, antibacterial and antiseptic properties.

Sassafras has a very long history of herbal use. It was widely utilized by Native American tribes who used it to treat a wide range of ailments including gastrointestinal ailments, colds, kidney ailments, rheumatism, and skin eruptions. Also, the oil of sassafras was commonly used as a painkiller and an antiseptic in dentistry.²

See side effects of Sassafras Oil noted below.

Camphor is a terpene (an organic compound) that is frequently used in vapor rubs and herbal salves to relieve pain and reduce itching. Camphor seems to increase blood flow to the area and stimulates nerve ending when applied topically. It also treats toenail fungus, warts, cold sores, hemorrhoids, first degree burns, and osteoarthritis.

Camphor is made either by extracting and steam distillation of the bark of camphor trees, or (more common) chemically manufactured from Turpentine.³

Below are possible side effects that can occur from topical application of Zam-Buk. These side effects are rare, but can occur. Consult a physician if you observe any of the following:

While Sassafras has been used for hundreds of years in folk medicine, it has some potential side effects which should be noted even though the amount of Sassafras oil added to each Zam-Buk tin is very small; each 100 grams of Zam-Buk contains 0.62 grams (0.021 oz) of Sassafras Oil. Side effect symptoms can include diarrhea, abdominal pain, nausea, vomiting, dizziness,  hallucinations, low blood pressure, and shallow or rapid breathing.

Use of sassafras oil is also associated with liver damage. Finally, there's concern that consumption of sassafras during pregnancy can result in miscarriage.

Read what Dr. Weil has to say about Sassafras toxicity.

Zam-Buk may interact with the following medications and OTC products. Consult with your physician to find out if Zam-Buk is safe to use with your medications.

Zam-Buk is available online at Amazon and Ebay.

Be aware that 3 types of Zam-Buk are currently being sold on the internet; the authentic Zam-Buk "The Real Makoya" manufactured in South Africa, a Thai version, and a version from the UK. Each formula is different (even the green color) so be careful with what you purchase. Someone from South Africa should be able to tell you if it's genuine Zam-Buk as the smell and color of authentic Zam-Buk is very distinct.

We purchased all three variations and discovered the Thai version is a darker green and smells mostly of  eucalyptus oil. The UK Zam-Buk version comes close but does not smell the same as the South African manufactured version.

Send Us Your Feedback!

Have you used Zam-Buk to treat a skin ailment? Please send us your feedback! Continue reading below for feedback from Earth Clinic readers who have used Zam-Buk.

Deirdre Layne is a widely respected expert in natural remedies and a healthcare professional specializing in Energy Medicine. She is the Founder and Chief Executive Officer of Earth Clinic, which began in 1999 as a local site supporting Deirdre's healing practice. People began using her website to share tried-and-true home remedies; they were most excited about the health benefits of apple cider vinegar. Ultimately, Deirdre co-authored the book about it, Apple Cider Vinegar: A Modern Folk Remedy. Earth Clinic has consistently been ranked among the world's top sites for Alternative and Integrative Medicine for over 20 years.

I am wondering what is the carrier oil in Zam-Buk, can not use some carrier oils. Thank you in advance.

I was also wondering about this, so googled it. Apparently it depends upon where it was manufactured. Some list only camphor and eucalpytus in active ingredients, some list in addition to those, thyme and sassafras. In still another ingredient list, sassafras was replaced with colophony. I only found a few ingredient lists that named the carrier, and some had paraffin, and others named paraffin and petrolatum. Not sure why it isn't listed on the package as I do try to avoid paraffin and petrolatum products.

I'm also using zam buk for all the years. Is the best also for cracking heels. I rub my feet with zam bok en wear socks the best over night.

A PHARMACIST at Clicks Vredenburg recommended Zam-Buk when I could not find an ointment (thrombo fobo jel) I was using for my itching burning, swelling hands every winter season.

I immediately bought it and I never looked back, it helped me a lot, and I am also using it for my dry feet.

Lived in SA. My dad used to have Zam-Buk at hand throughout his lifetime. It seemed to be his A-Z ailment ointment. Brings back very positive memories.

How Extraordinary !! I have recollections of this being a common salve in the medicine chest aeons ago, during the course of my youth - I had forgotten all about it. Can't remember exactly what I found it useful for but recall it was an excellent remedy in the medicine chest, will now check it out again. Many thanks, Pamela

As a child in Canada, my mom always had Zam-Buk ointment in the cupboard for cuts, scrapes and bites. I loved the smell of it and it healed and relieved the pain and itch fast. I used it on my children as well. Awesome product!

As a South African living abroad now for over 20 years, I can attest to the need to have Zam Buk. It was always a part of the care kit at home when I was growing up and then became a must buy once we had moved and made trips back to SA. It is great for stings, sunburn, chapped lips, rough skin, cuts and “grass burns”. As a child, my son suffered with dry skin on his hands and my wife would cover his hands in Zam Buk and put him to sleep wearing cotton gloves and in the morning he would be sorted out. I have also tried the other versions and can safely say nothing beats the “real makoya “! For those of you wondering about the meaning and origin of the word Makoya, this may help: “The name Makoya hails from the townships in South Africa and is an informal term for the ‘Top Guru'. We want to be known as the trendsetter and we strive to be acknowledged as pioneers” – Kenny Malgas

I live in Canada. Purchased the product many years ago. Fantastic. Use it mostley for chapped lips. Do a lot of walking with my dogs and find it really good for dry skin too. A perfect product for me.

My family use Zam-buk for everything! We've been using it for more than 60 years!

Is Zam-Buk good for fibromyalgia? I'm always in pain.

High Vitamin D3 gave me my first relief from Fibromyalgia - 10,000 IU daily with vitamin K2. Read up on High Vitamin D3. Mr. Robert Henry told me to read about it, I did and got an added blessing.

Yes we used zambuk as teenagers while in Tanzania. It was used as pain balm. Now I am 79 and long forgotten the balm.

Zam-Buk "the real Makoya" township slang for "the real McCoy" denoting the originality of the ointment or anything deemed an original compared to fake or knockoffs. Happy use... From South Africa!

Will you all be getting any more of the ZAM BUK balm's in again?

Anyone traveling to/from South Africa to bring them OR can they be shipped to the U.S.?