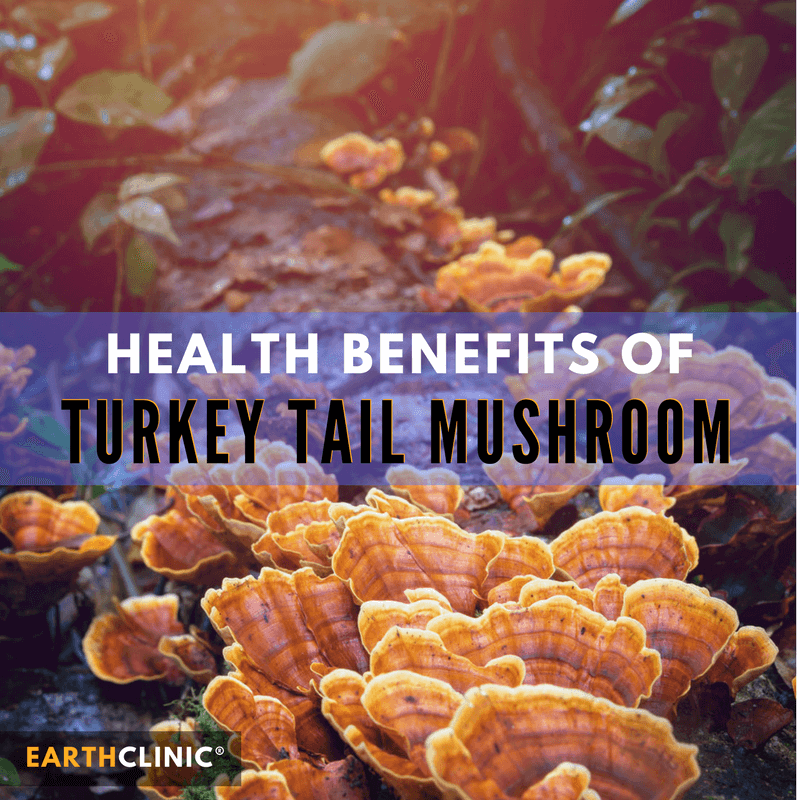 Turkey Tail is the name of a fungus. It is a mushroom that can be found flourishing in woods all over North America and around the world.  Turkey Tail Mushroom is a natural remedy with many health benefits. It has been used effectively for immune support, as an adjunct cancer treatment, and for chronic health problems like chronic fatigue and autoimmune diseases.

The scientific name for Turkey Tail is trametes versicolor. It is also known as coriolus or polyporus versicolor. This mushroom thrives on rotting logs or decomposing tree stumps. While this may not sound like an appealing environment, rotting logs are essentially composting, thus turkey tail mushrooms are growing in rich, nutrient dense material. Turkey tail gets its name from its visual likeness to the fanned out tail of the turkey bird.

Turkey tail is a versatile herbal remedy for health problems that range from simple and acute issues like colds and the flu to life threatening or debilitating diseases like cancer and Lyme disease.

There are two proteoglycans (complex proteins) in Turkey Tail that are especially beneficial in fighting cancer. One of them is PSK (Polysaccharide-K) and the other is PSP (Polysaccharide-Peptide.) Since 1970, PSK has been used medically in Japan. PSK has made a marked difference in survival rates for many cancers including stomach, colon, esophagus and non-small cell lung cancers. PSP is credited with reducing pain, improving quality of life and supporting the immune system for several cancers including ovarian and cervical cancer.3 PSK was approved over 40 years ago as a cancer treatment by the Japanese National Health Registry. It is part of routine cancer treatment in Japan.4 The polysaccharide in Turkey Tail has shown to check the growth of cancer cells.5

While there is significant research and history of use of turkey tail as a valid and beneficial cancer treatment, usually when turkey tail is used for cancer it is only part of the treatment. It is not recommended to take turkey tail to treat cancer without medical supervision and other appropriate medicines.

Should I Take Turkey Tail?

Turkey tail is a wonderful natural remedy for many health problems besides cancer. It may be useful for the following as well:

Turkey Tail is a Functional Food

A functional food is one that has value beyond that basic nutrition it contains. Functional foods may be consumed for nutrition but also have medicinal value. Turkey tail is one such food.

Turkey Tail is an Adaptogen

Among other wonderful benefits of turkey tail is its use as an adaptogen.

What is an Adaptogen?

Scientists first used the name “adaptogen” in 1964. In short, adaptogens help the body to cope with stress and normalize body functions.

Adaptogens, by definition, must:

Adaptogens appear to allow the body to respond to stressors more quickly but in an less dramatic fashion. This may be in part by how adaptogenics regulate blood sugar – providing adequate and sustained amounts of blood glucose without extreme highs and lows.

The earliest record of turkey tail used as medicine dates back to 1368 A.D. During the Ming Dynasty in China turkey tail mushroom was boiled and taken as medicine for health and energy. In TCM (Traditional Chinese Medicine) Turkey Tail is known as Yun Zhi.8

How to Prepare Turkey Tail Mushroom

As with most herbs, there are a variety of ways to prepare Turkey Tail for medicinal use. Turkey Tail can be dried, powdered and encapsulated. It can be tinctured. It can be used in recipes. Young Turkey tail is even chewed like gum. Turkey Tail can be made into herbal tea or infusions (made similarly to tea, but steeped much longer for more of the beneficial elements to be extracted.) Each method has its advantages. Capsules are generally pretty convenient. Tea is simple to make.

With some herbal preparations, different methods will yield similar results. With Turkey Tail, however, the best results will come from using a tincture that has been prepared a specific way – double extracted. This is a far superior way to process Turkey Tail for medicinal use. The alcohol extracts sterols and terpenes, which are not extracted in water preparations. (Thus they will not be in teas and infusions.) Hot water will extract beta-glucans, proteoglycans, and polysaccharides.

Which Turkey Tail Capsules are the Best?

Taking dried turkey tail without extracting, tincturing or boiling (as in a soup or tea) will not give much benefit to the body. It takes some time for the medicines to be extracted from the fibrous mushroom. The process of human digestion will not have the time or heat required to extract the needed properties to maximize the benefits of turkey tail.

How to Make Turkey Tail Tea

Chopped turkey tail mushroom can be added to any simmering soup or stew to boost its nutritional value.

Before harvesting any mushrooms for internal use it is absolutely necessary to ensure proper identification. Ideally, have someone who knows their mushrooms well positively identify any sample of turkey tail to confirm that is indeed what you are working with. It is important that the underside of the mushroom be white and not brown. It should also have tiny holes in the underside and not "fins." These are two clues to identifying true turkey tail mushroom and not its look-a-likes.

Turkey tail  can be dried in paper bags (this will take several days) and then stored in glass jars to be used throughout the year.

Have you used turkey tail for health? Please send us some feedback!

I take a turkey tail supplement for allergy symptoms the past 2 years each spring. Helps immediately and increases my energy. I take 2 TT capsules in the morning. If there's a virus going around, I take another 2 at night to prevent it.