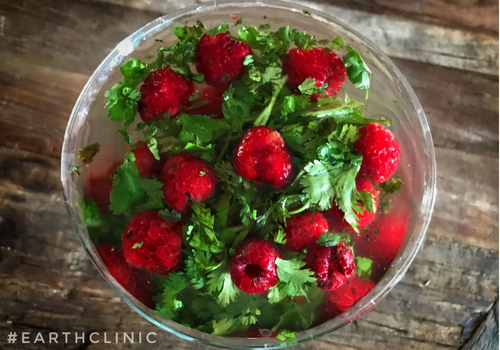 Cilantro, also known as Chinese parley, is a tasty garnish for many dishes that possesses some impressive health benefits. Cilantro, like many green vegetables contain a significant amount of vitamin K. It also contains potassium, vitamin C, vitamin A, and folate. You may notice that cilantro is reminiscent of carrot tops. Indeed, carrot and cilantro are in the same family!

The Latin name for cilantro is “coriandrum sativum,” and the seeds of the cilantro plant are called coriander seeds. Coriander seeds not only produce cilantro, they are ground and used as a culinary spice as well.

Cilantro’s ability to remove heavy metals from the body is putting cilantro on the radar of many folks today. The trick is not to detox too much at once, lest you feel sick. And once your remove the metals from their hiding places within your body, be sure to remove them so they do not just relocate.

Always start slowly with detoxification. Add some detox baths to your routine. Activated charcoal powder can also be used to alleviate symptoms of detox.

Richo Cech also suggests one dropperful of cilantro in a cup of hot water as a headache remedy.

Cilantro is also touted as a remedy for weight loss, blood sugar control and heart health. Perhaps it out to be considered a good food to use when you are trying to lose weight, control your blood sugar and boost the health of your heart. Cilantro alone will not accomplish miracles for any of those conditions unless you also include a healthy diet, moderate exercise, stress reduction and adequate sleep to your health equation.

Cilantro is easy to add to recipes, unless of course, you don’t care for the taste. Here are a couple of recipes to get you started. If you have a favorite cilantro recipe, please share it with us!

Wash cilantro and raspberries before adding to blender. Blend until smooth. Drink immediately. Excellent as a simple afternoon pick-me-up tonic.

Blend the above in your blender. Add more almond milk if it is too thick for your tastes.

Thinly slice the red onion. Combine with the lime juice. Set aside.

Heat soft taco shells until warm, one at a time. (Cover with a clean towel to keep them soft and warm as you cook each one.)

Drain the lime juice from the onions.

Onto each corn tortilla place a layer of the following: chicken, marinated onion, and pineapple. Garnish each with cilantro.

Grow Your Own Cilantro

Cilantro is easy to grow in mild climates. It doesn’t grow well in the dead of winter, heat of summer, or inside the house. But in the spring and fall you can keep yourself supplied with fresh cilantro for your smoothies and Tex-Mex favorites. Once the plant is established, trim and use leaves regularly to avoid bolding (when the plant goes to seed and stops growing.)

Have you used cilantro for your good health? Please send us some feedback!

Excellent article on the benefits of consuming cilantro in our diet. Keep it coming.