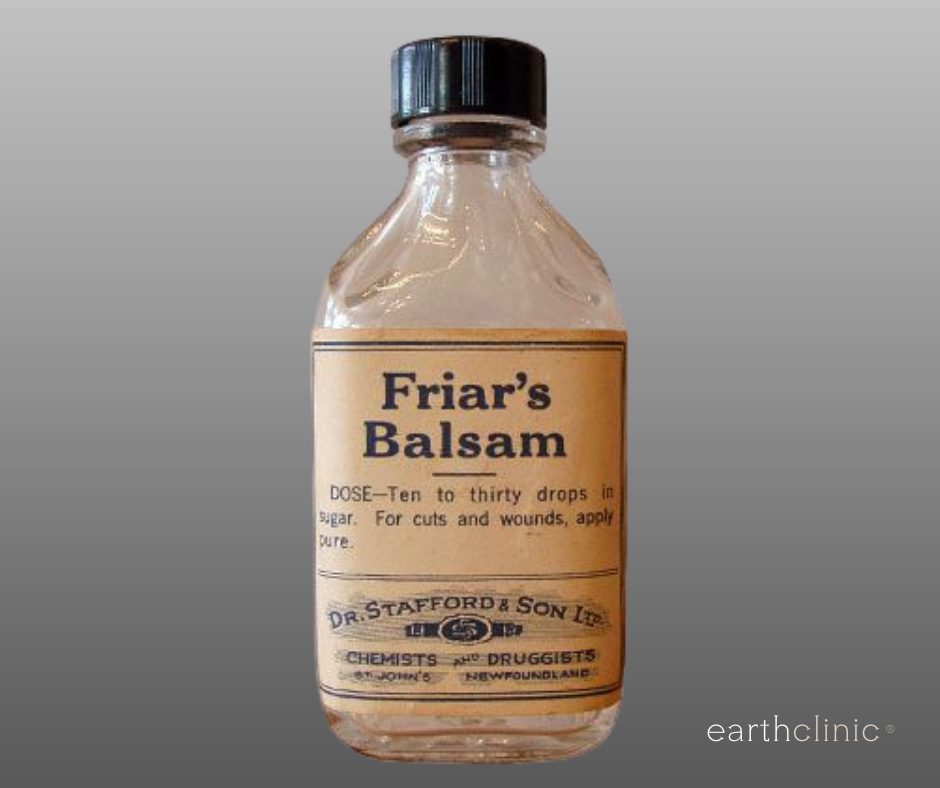 Tincture of Benzoin, also known as Friar's Balsam, is a neat little inexpensive item that you might want to keep in your medicine cabinet. It has traditionally been used externally to treat wounds and blisters, and in steam preparations for coughs, bronchitis, and asthma attacks.

What is Tincture of Benzoin?

Benzoin products are made from a resin from a group of Styrax trees that grow in tropical regions.

The resin is produced after they cut into the bark of trees that are at least seven years old. The resin hardens to give a grey-brown solid with a vanilla-like odor. Tincture of benzoin is then made by soaking benzoin resin in alcohol.

Friar's Balsam smells a bit like vanilla with balsam undertones.

Throughout its 600 year history, Friar's Balsam has been known as Balsamic Tincture, Balsamum Traumaticum, Jesuits' Drops, and Jerusalem Drops.

It was one of the most popular natural remedies during the Victorian era. A formulation was invented by Joshua Ward, an English doctor, in 1760.

Here is Tincture Benzoini Composita listed in the British Pharmacopoeia of 1867 on Google Books.  Steam inhalation of Friar's Balsam was often recommended to thin mucus and relieve asthma.

Today, benzoin tincture is most often used to make a bandage stick to the skin longer. What it does is form a coating over the skin, which protects the skin from harsh body fluids and adhesives from bandages.

It is also used by athletes and the military for blister protection. Doctors also apply it under a cast because it reduces itching and protects the skin.

One more typical use is to heal painful canker sores.

Have you ever used Tincture of Benzoin for wounds, bandages, lung conditions or blisters? Please send us your feedback!

Tincture of Benzoin - I have used this product for many years to increase the adhesion of bandages. Helps keep bandages on for a number of days. Very inexpensive and can be found at the local apothecary.

I thought I had contracted Covid 19, I had all the symptoms including not being able to breathe, which turned out negative. Then I remembered that when I was about 5 years old and my brother was a baby, he used to get croup very badly, so much so that the Dr. wanted to make a hole in his throat.

I am talking about 75 years ago, then that was unheard of. My mother refused and asked my father to go and get her some Friar's Balsem, put blankets over the kitchen table, and put a little saucepan with water on the primus stove under the table for her in which she had added some Friar's Balsem.

There my mother sat with my little brother for as long as I can remember, until he could breathe normally again. It happened a few times more, until he was about 4 years old, then he seemed to outgrow it.

Well to cut a long story short, I asked my children to buy me some at the chemist and that is what I did. It worked wonders, and when my daughter got Covid last year, she did the same. I was not at home at the time visiting my eldest daughter. My youngest, that was ill said that it saved her life, because her sister in law that is the same age, as he 46years died a week after she was admitted with Covid from heart failure, although she had never had heart problems before.

I also said to my children, God forbid, but if I should get ill again they must not take me to hospital. In the mean time I have been diagnosed with COPD. needless to say, the Friar's Balsem is been used in a steamer daily, which helps with the breathing.

For COPD you should see this post from one of the EC users. I am just copy-pasting it here for your consideration.

I personally used it & believe me it is a miraculous treatment for COPD.

This cured mine and my husband's cousin who had COPD:

So here is the recipe for “OMG I Can't Breath”:

My pulse ox was 95% when I took my first dose and within 45 minutes it was an easy 98% and I literally felt like I was breathing for the first time in weeks. Within 15 minutes of taking it you begin to cough up a lot of stuff and your lungs clear quickly.

By the way, NEVER EVER EVER swallow anything you cough up at any time in life…always get a tissue or go outside and spit. Your lungs push out things that do not belong there and you do not need to introduce that bacteria into your digestive tract to cause more trouble in your body.

I have a son, with downs and other problems, if he coughs he doesn't spit out and end up swallowing, what he coughs up, could I still use friar's balsam on him?

Tincture of Benzoin (Friar's Balsam) for Bronchitis and pleurisy

Used this remedy for years from my dad. Boil approximately 1 qt water and pour in approximately 1 Teaspoon of tincture of benzoin. Turn heat down, put towel over your head and inhale the steam for several minutes, taking deep breath's and holding it. Do this several times a day as needed. (I use an old metal coffee can because the tincture will leave a sticky residue on on your good pots. )

The healing properties are amazing! Got rid of my pleurisy in 1 day!

Also used it for my son's milder asthma issues.

Growing up in England in the 1930s, I remember that we used to use Friar's Balsam for cuts and minor wounds. It was also used for lingering coughs by inhaling a few drops in boiling water.

EC: Friar's Balsam is an ages-old herbal variation on tincture of benzoin.