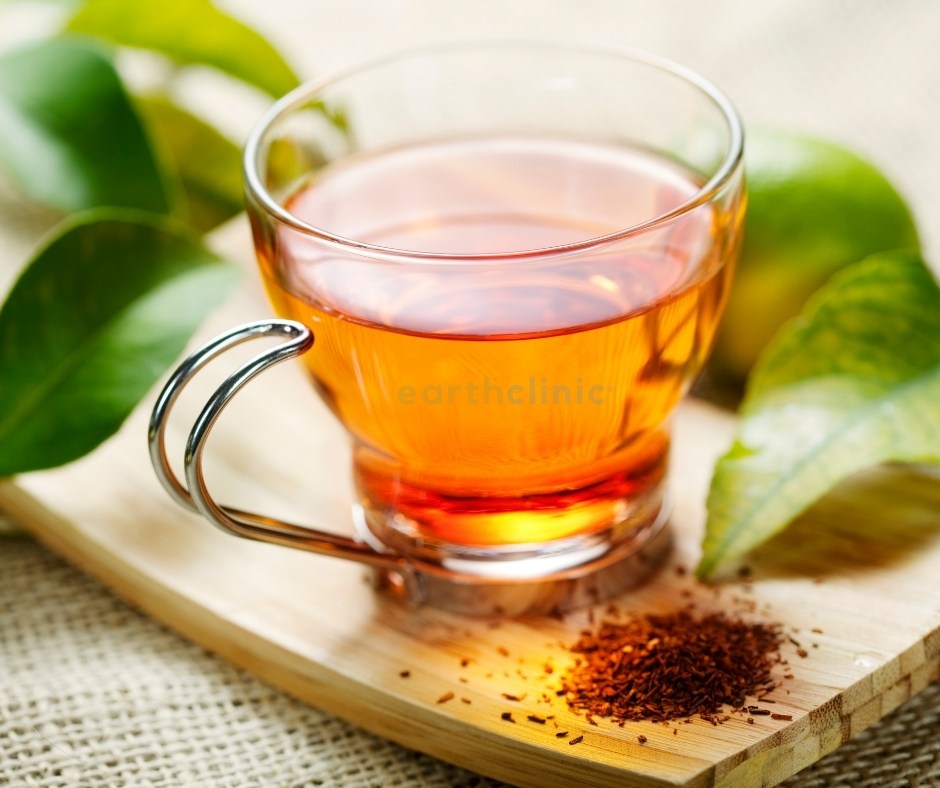 Rooibos tea is a flavorful red tea from South Africa which has gained worldwide popularity over the past decade. Many people drink it as a healthy, caffeine-free herbal alternative to black or green tea.

The tea contains several antioxidants, which may explain some of the reported health benefits, such as protecting against stroke, cancer, and heart disease. It even helped to shrink a tumor in one Earth Clinic reader's dog, when combined with Milk Thistle and Reishi mushrooms!

What is Rooibos Tea?

The Rooibos or "redbush" plant is actually a legume adapted to arid climates.

Rooibos tea is produced from the fermented leaves of the Aspalathus linearis shrub from South Africa.

Its leaves are annually harvested and allowed to oxidize in heaps, just as with traditional tea (camellia), but the resulting red tea is naturally caffeine-free and offers rare antioxidants as well as quercetin, a number of other phenols, and several volatile oils.

While this locally treasured tea has been more broadly known since the 17th and 18th centuries, it may have been a South African woman, Annique Theron, who made the plant and its products genuinely popular by publishing a book in 1974 that extolled the health benefits children and adults could derive from Aspalathus linearis, particularly in the relief of allergies and skin conditions.

Today, not only is it available in many tea varieties but rooibos is now also found in supplements, skincare, shampoo and in gin!

Research on Rooibos tea's health benefits is gaining traction over the past decade with 583 cited studies on PubMed.

Rooibos tea is naturally free from caffeine, making it an excellent alternative to green or black tea.

Caffeine is a natural stimulant found in black and green tea.

Caffeine does have health benefits, such as sports performance, concentration, and enhancing mood. However, too much caffeine can cause side effects like insomnia, anxiety, and heart palpitations (1)

Rooibos contains no oxalic acid, which is found in black tea.

Oxalic acid is considered an antinutrient; a plant compound that reduces the body's ability to absorb essential nutrients.

Consuming high amounts of oxalic acid can increase your risk of kidney stones. This makes rooibos a very good option for those with kidney problems.

Research has shown that drinking rooibos tea increases the body's levels of antioxidants, but unfortunately the effects are minimal and wear off quickly. In one small study, the boost in antioxidants lasted only 5 hours after participants drank 500 ml containing 750 mg of a rooibos leaf tea. (3)

Another study showed no significant effects on blood antioxidant levels after consuming rooibos tea. (4) One reason for this might be because rooibos is inefficiently absorbed by the body. (5)

Antioxidants can help heart health, which is why the cardiovascular benefits of rooibos tea may be useful.

One animal study showed that the antioxidant aspalathin, which is found in rooibos tea, has anti-diabetic potential and reduced insulin resistance. (7)

Rooibos is generally considered to be a safe herb. Side effects are rare.

Major components of Rooibos tea are metabolized in the liver, so this herbal remedy is not recommended for those with compromised liver function. (8)

Additionally, Rooibos may have some limited estrogenic effects, which may be contra-indicated for those with estrogen-related cancers or other hormone-sensitive conditions. (9)

The medicinal components of Rooibos tea are especially valued as anti-inflammatory agents and antioxidants, both of which are critical to everyone's health.

More specifically, Rooibos is valued as a natural remedy for acne, various other skin conditions, as part of a diet to prevent or mitigate diabetic conditions, and even as a potential cancer prevention remedy.

Continue reading below for feedback from Earth Clinic readers on Rooibos benefits!

I have pre-diabetes and dawn phenomenon. Besides being on a healthy Mediterranean Diet and exercise, I finally found something that works for me.

In the evening I drink 1 cup of organic red Rooibos tea. I buy it on Amazon.com, get a 80 tea bag box. I also like the taste of the Red So. African Rooibos tea.

Diabetics may want to look into Rooibos as well for reduction of diabetic symptoms. Lab studies have shown the tea to have positive effects on both hypoglycemia and in reducing the negative effects of high blood sugar levels.

Rooibos - no not for me. I had a stomach ache and bad nausea after drinking it. Maybe it was a bad brand but I will never try it again.

Hello! I love rooibos tea. Drink it once a day in the afternoon. I steep it for at least 5 minutes, then drink slowly. It makes my skin smooth. Loooove this herbal tea.

Rooibos tea leaves are promoted as an acne treatment with both internal and external usage reducing the prevalence of acne outbreaks. Similarly, it is sometimes used to treat psoriasis, diaper rash, general dermatitis, and other skin conditions where inflammation can be a central issue.

Love red rooibos tea. I drink a cup every night an hour after dinner as it truly does help me get to sleep.

Rooibos tea is so calming and relaxing. Other teas, even the caffeine free herbal types can make me jittery but Rooibos just calms me down almost immediately. I tend to put 2-3 tea bags in a cup at a time, and I have 2-3 cups when I need to be extra relaxed and have a great night's sleep. A true miracle product! Rooibos tea and magnesium are the best in calming a hyperactive nervous system.