Is Your Cherished Morning Tea Too Toxic to Drink? 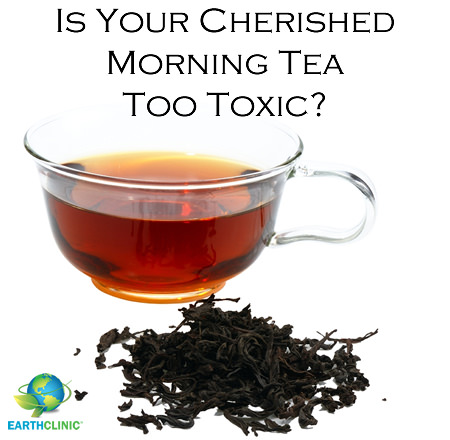 Studies worldwide have revealed the alarming news that the world's oldest beverage may be contaminated with heavy metals and pesticides. The white paper tea bags may well contain fluoride at unsafe levels. Cheap, black teas, especially those from China, were most apt to show high levels of contaminants. Tea has always been used for medicinal purposes, but more than anything else, tea is a comfort drink. Organic teas are the best choice for health-conscious tea-lovers.

The History of Tea

Officially, tea originated in China during the Shang dynasty, at least 3,500 years ago. However, that is only when historians found the first recorded mention of tea. There are some charming (and not-so-charming) stories about who ‘discovered’ tea. One story relates how the Emperor of China (odd, but these things always happen to Emperors and not to lowly farmers) was drinking a bowl of boiled water, some leaves from a tea tree blew into his bowl, and voila! tea was discovered.

Now, all of us tea drinkers are well aware that ‘tea’ can be made from an almost infinite number of plants. Mint, chamomile, ginger and so many more: all are made into teas daily for pleasure and health. Tea purists, however, insist that ‘real’ tea can only be made from the leaves of the tea tree -- Camellia sinensis.

The four main types of tea are black tea, green tea, white tea and oolong tea. Of course, there are as many variations (flavors, scents, mixes etc.) as there are tea producers. However, many daily tea drinkers don’t realize that all of those teas started as leaves from the same tea trees. The fact that these teas taste and look differently is because of how the leaves are processed.

Where Tea Comes From

Most tea is grown on huge plots of land by large tea producers. Tea leaves must be picked by hand because machine picking bruises the leaves too badly, but otherwise it is a commercial, large scale crop. Tea is grown in Japan, India, Taiwan, Sri Lanka and a few other places, but China produces over 30% of the world’s tea. You may have noticed that most of these tea-growing countries are not famous for their stringent anti-pesticide laws. While there are small tea growers in all of these nations who produce high-quality, organic teas, most of the tea grown does not fall into that category.

How Tea is Grown

Most tea is mass-produced. Tea plants produce two crops a year and are kept pruned waist-high for ease of picking. Only the tip bud and two leaves are picked, so anything sprayed on the plants will be on the ends of the branches. In addition, most teas are left unwashed before being put into teabags. If a pesticide was on the plant, it will be in your cup. White tea would have the smallest amount of anything sprayed on the bush because it is picked the youngest; black tea leaves are on the plant the longest so would have the most.

In November 2013, a class action lawsuit filed in California alleged that Celestial Seasonings 100% Natural teas contained contaminants in levels exceeding federal standards. There are a number of possible contaminants in tea other than pesticides, many of them labeled as ‘natural flavoring’. ‘Natural’ does not necessarily mean that it’s something you would really want to eat. Many of the most popular teas are said to contain toxic pesticides, including Lipton, Tetley and Bigelow.

Overall, Europe has stricter standards than the U.S. regarding what is or is not acceptable. In the countries where the tea is grown, it is usually considered the company’s responsibility to make sure that the tea is clean and meets standards.

Iranians drink a great deal of tea. The Journal of Environmental Health Science & Engineering conducted a study on pesticide residue in tea since most tea in Iran is imported. They found that 23.8% of the tea that was sampled and analyzed was contaminated with unregulated pesticides.

The white paper bag holding the tea could be contaminated with high levels of fluoride. Food Research International published a study on 38 popular teas sold in the U.K. and concluded that cheap black and green teas contained unsafe levels of fluoride.

What is a Tea Drinker To Do?

It’s a shame that we have to look suspiciously at our favorite cup of tea, particularly since finding uncontaminated or non-GMO foods is getting harder all of the time. Someone who drinks an occasional cup of tea may not be too concerned. However, those of us who drink multiple cups or glasses of tea daily would be wise to make the effort to find pure, organic tea. Then our cup of tea will indeed be a healthy, comfort beverage.