Earth Clinic Team | Modified on May 09, 2012
Add New Post Comments
We're not sure who came up with this stress indicator test (it came in an email without a source), but it's very powerful. Try it and let us know if you'll be checking into the local loony bin.

STRESS INDICATOR
Anonymous writes: "I'm not sure exactly how it works, but this is amazingly accurate. Read the full description before looking at the picture.

The attached photo has 2 identical dolphins in it. It was used in a case study on stress levels at St. Mary's Hospital. Look at both dolphins jumping out of the water. The dolphins are identical. A closely monitored, scientific study group revealed that in spite of the fact that the dolphins are identical, a person under stress would find differences in the two dolphins. If the subject found many differences between the dolphins, it meant that the person was experiencing a great amount of stress. Look at the photograph, and if you find more than one or two differences you may want to take a vacation."

SCROLL DOWN TO SEE PHOTO

SCROLL DOWN A WEE BIT MORE 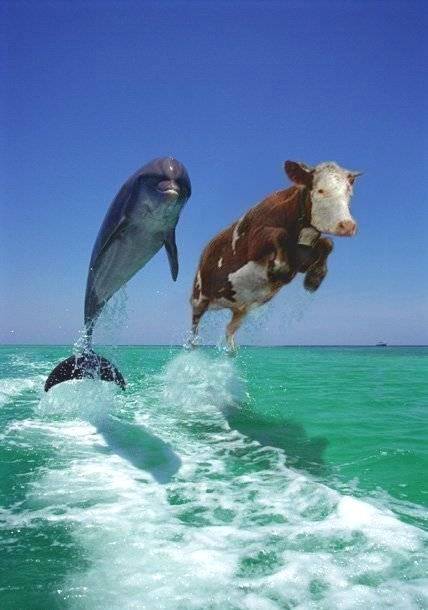 Saw the very same cow and dolphin while walking on the beach the other day.

This is in regards to the stress test. I have to thank you for making it available! I was udderly MOOved by it! I am very stressed because I'd never seen a brown dolphin before like the one on the right. I need a life-long vacation!

humor...quite possibly one of the best remedies for stress. thank you for the good reminder. great additions to the acv & coconut oil ive been using, sleep, water, and daily doses of gratitude to help my stress, skin & kidney issues. thanks for your great site.

I tried to take the "stress test" but when I scrolled down and tried to see the dolphins, there was nothing there. Am I THAT stressed out, or did the page not load the dolphins? Also, I think what you are doing by providing additional/optional treatments is a noble and worthy cause. Thank-you and keep up the good work!

Well, I guess the guys with the nice, white wrap around jacket will be here for me any minute

I found the image on the right - (facing the picture)- horizon seems that of some sort of vessel. Would this be consistent of possibly a third identical image? I believe I can identify the location of the area where this photo was taken as well, and I believe I will vacation there.

Thanks again and I'll be keeping you "Up To Date" as to my Wife's PROGRESS in the "You KNOW What Ward" of our local "Get Well Soon " Place .. :-) Thanks again and have a great Day, Ray Pfob... P.S. I WILL see to it that she drinks plenty of: Apple Cider Vinegar

I must be insane because I see a MAJOR difference. The one on the left is a dolphin and the one on the right is a COW! I refreshed the page to make sure I wasn't just seeing things and it was still there! I asked my sister to come in the room and look at the differences and she didn't see the cow. All she saw was ears and a bell on a dolphin. It sure is a good thing I'm going on a vacation at the end of July with my mom or I might be enrolling in a mental hospital pretty soon.

Hello. I've been thinking that maybe i am getting stressed out lately, but didn't know how to test myself for it. I came across your website and found the stress test. I did the stress test. After doing the stress test, i have called my boss and announced my retirement. I am 47. I come to the conclusion that a vacation would not help me and my stress problem. I had to retire. Thanks again, and have a great day, and be careful.

I see just one difference, I guess that means I am not at all stressed. Great test

Wow, I'm guessing I need a SERIOUS vaction like maybe for a month or more, cuz well....hummmm yeah I see just a few more differences than one or two. Like the tail is longer on the left one, the nose is longer on the right one and well alrighty then Definitely vacation time

I don't think I passed the stress test because I swear, I can see a difference. Isn't the dolphin on the right jumping higher? Also, unless I'm really stressed out, its tail fin looks larger than the other too

You people really know how to stress some people even more. I'm sure that some folks are even having a panic attack after reading some of your posts. Lol In all seriousness, even my 5 year old thought that it was a funny difference. So, don't freak out. It is a dolphin and a cow!!! ; )