How Common Carbon Dioxide Affects Your Brain and Health

Many people live with high carbon dioxide levels in their homes, cars, and offices without ever knowing it. However, recent studies show that common indoor carbon dioxide exposure can reduce cognitive and decision-making performance up to 50%!

Carbon Dioxide (CO2) is natural and harmless in small quantities, but when levels rise, it can cause symptoms such as sleep disturbances and a loss in productivity.

What is Carbon Dioxide?

CO2 is a colorless, non-flammable gas.

It consists of one part carbon and two parts oxygen. It is considered one of the most essential gases on our planet because plants use it to produce carbohydrates in photosynthesis. Because animals and people depend on plants for food, photosynthesis is necessary for the survival of life.

The Earth's atmosphere is about 400 parts per million or ppm (0.04) carbon dioxide. Scientists estimate that before human industrial activity, Carbon Dioxide concentration was around 270 ppmv (part per million by volume). This means that CO2 levels in our atmosphere have risen about 40% since the onset of industrialization. (1)

When we breathe out, the air is 100 times more concentrated in carbon dioxide, around 40,000 ppm (4.0). As you might guess, this can become problematic when you are sleeping or working in a room without adequate ventilation. Add more people and/or pets to that room, and voila, you now have high-level carbon dioxide levels with accompanying ill health effects.

Carbon Dioxide's Effect on Your Brain

One 2012 study which assessed Carbon Dioxide and Decision-Making, showed that at 1,000 ppm CO2, performance in college students was reduced 12%.

Various studies have measured CO2 concentrations in enclosed places, and the numbers are staggering. When reading the below figures, keep in mind that what is generally considered acceptable are CO2 levels below 1,000 ppm.

Airplanes have an average CO2 concentration of around 1,400 ppm during flight, with peak concentrations of up to 4,200 ppm. (2). This explains why people often get off a long flight feeling extremely tired and jet lagged!

According to this study, cars with one occupant reach a steady level of 4,100 ppm, with the windows closed and the air recirculating.

One study suggests that a typical meeting (conference) room in an office setting can reach up to 1,900 ppm CO2 during meetings lasting anywhere from 30 to 90 minutes (5).

When ventilation is inadequate inside, Carbon Dioxide starts accumulating indoors with every breath that we exhale.

Exposure to high ppm CO2 can produce a variety of ill health effects, such as:

Levels of Carbon Dioxide and Ailments Associated With Those Levels

Hypercapnia, or hypercarbia, is a medical condition arising from too much carbon dioxide in the blood. Hypercapnia has several causes, such as hypoventilation (breathing at an abnormally slow rate), lung disease, or being exposed to unusually high carbon dioxide concentrations caused by rebreathing exhaled carbon dioxide.

Sick building syndrome (SBS) is used to describe a situation in which the occupants of a building experience acute health issues that appear to be linked directly to the time spent in the building, even though no specific illness or cause can be identified. High CO2 levels are sometimes to blame for this syndrome.

Get A Carbon Dioxide Meter

We recently bought a CO2 meter after having sinus issues from dirty air ducts as soon as the heater came on when the temperature dipped into the 30s last week in CT. We first cleaned all the intake and output vents and air ducts using a Shop-Vac. Then, to make sure the vacuuming cleared all the dust and construction debris, bought a small portable device to show AQI (Air Quality Index), PM2.5, PM10, and VOC.

Thankfully, this little device also shows Carbon Dioxide levels, which, to our surprise, showed CO2 levels dramatically rising into the "poor" zone one early evening in the bedroom! 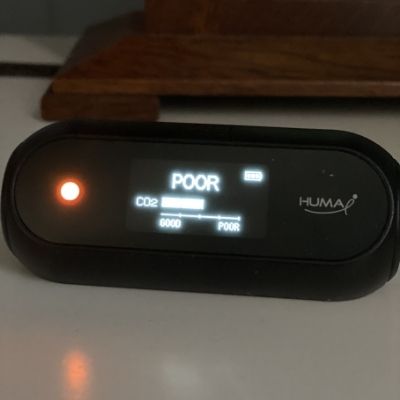 Thankfully, it's easy to fix high carbon dioxide. All you do is open a window to let fresh air in, and the meter quickly returns to "good" CO2 levels (unless you live in a polluted city with high outdoor CO2).

While it is normal to have an increase in CO2 at night when the windows are closed, it is essential to know when levels go up past 600, which you will never know unless you have a carbon dioxide meter.

Our two devices, shown below, have shown that carbon dioxide can build up at different times of the day in a small bedroom when the windows were shut and not just at night. Candles and dogs drive that level higher! Thankfully, opening a window generally brings CO2 levels down within 30 seconds.

Here are two highly-rated devices that give Carbon Dioxide readings on Amazon. We suggest you research different devices yourself to get a general idea of what's offered. Good meters generally cost over $100.

This first device (#1 below) does lots more than give Carbon Dioxide readings, which we love, but doesn't show CO2 levels in ppm (parts per million). The second device (#2 below) does have such a meter and also charts CO2 over a month, but does not give AQI, VOC, and PM2.5 and PM10 readings, which is very handy if you want to know how your air quality is. Device #1 is portable and plugs in. Device #2 only plugs in.

Note: If you have allergies that you suspect might be coming from debris in your air ducts, the Huma-i is great!

Do Not Confuse Carbon Dioxide with Carbon Monoxide Devices!

It's very easy to get these two mixed up when searching for devices. Here are 2 things to remember.

The wearing of face masks during COVID-19 and unhealthy carbon dioxide levels have become a hotly debated item these past few months, especially as people commonly report breathlessness while wearing a mask. A recent study published in the Annals of the American Thoracic Society shows that face masks are unlikely to cause over-exposure to carbon dioxide, even in patients with lung disease like COPD.

In "Effect of Face Masks on Gas Exchange in Healthy Persons and Patients with COPD," Michael Campos, MD and co-authors assessed problems with changes in oxygen level or carbon dioxide levels in healthy individuals and veterans with COPD before and while using surgical masks.

"We show that the effects are minimal at most even in people with very severe lung impairment," said Dr. Campos of the Miami Veterans Administration Medical Center and the Division of Pulmonary, Allergy, Critical Care and Sleep Medicine at the University of Miami.

Dr. Campos also explains: "Dyspnea, the feeling of shortness of breath, felt with masks by some is not synonymous of alterations in gas exchange. It likely occurs from restriction of air flow with the mask in particular when higher ventilation is needed (on exertion)."

Got a question or comment? Please send us your feedback!