Examining the 5:2 Diet - Does It Actually Work? 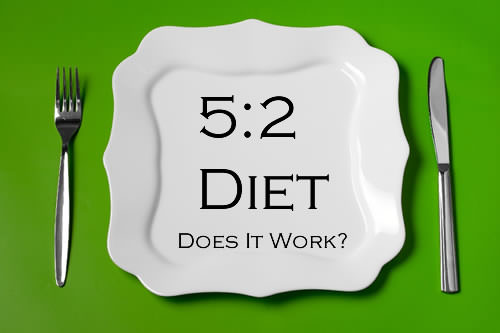 The 5:2 diet originated in the UK and spread from there to Europe and to the US. The brainchild of doctor Michael Mosley and food writer Mimi Spencer, the diet calls for occasional fasting throughout the week. For two days a week, you restrict your calorie intake, women to 500 calories, men to 600 calories. On the remaining five days, you eat as you normally would.

The idea behind the diet is that the intermittent fasting - as opposed to the continuous reduced calorie intake of most diets - will discourage the body from going into starvation mode. In “starvation” or “conserve” mode, which is the result of the deprivation typical of most other diets, the body hunkers down as if it is in real distress. Instead of burning more calories, it becomes more efficient and thereby burns less.

In the 5:2 diet, by contrast, the body goes into “recovery” mode. In this mode, the body eliminates many impurities WITHOUT slowing down its metabolic rate. In fact, there is some evidence to suggest that the initial response to a reduction in calories is an increase in metabolic rate. Obviously, the highly reduced calorie intake during the fast days is what spurs the weight loss. Exercise is recommended alongside the diet.

There is some evidence that occasional fasting has some real benefits, even without the weight loss. Though tests have not proved this conclusively, there is reason to believe that intermittent fasting may improve insulin sensitivity. Fasting in general can also lead to you being more in touch with hunger cues as well as being more able to respond to them appropriately.

But the big issue at stake here - whether or not intermittent fasting leads to weight loss – is still being debated, as the long-term evidence isn’t as yet available. What seems clear is that this type of dieting seems, for some people, psychologically more possible. Many are attracted by the idea of only having to watch calorie intake on two days of the week, as opposed to day in and day out. There are of course books, manuals, articles, videos etc. helping people cope with their fasting days – what to eat, what to avoid, what works best, what makes things hard.

Many are also encouraged by the thought that fasting is not an entirely new-fangled thing, with many religions advocating occasional abstinence from food. And, in the end, two whole days of drastically reduced calorie intake is a likely precursor to significant weight loss. So anecdotal evidence of quick results has fed the general enthusiasm surrounding the diet.

Fasting - even for just two days out of the seven - isn’t easy for everyone. Some people report feeling irritable and lethargic, unable even to sleep properly and obsessing about food constantly. Exercise –-recommended along with the diet - is nigh on impossible for those who find fasting such an ordeal.

Nor does this diet offer any nutritional advice vis a vis a well-balanced diet. You could theoretically, in restricting your calorie intake and even in eating what you want without any specific guideline, cut out on valuable minerals and vitamins, doing your body some real harm in the process.

And then the final question - does this even work? And the answer, I am afraid, would still have to be that we don’t really know as yet. Some signs are good, though nothing has been conclusively proved. Psychologically, this seems to be tailor-made for some, while for others, it is nothing short of torture. This seems then a diet that plays on your temperament and psyche. Follow it, if you will and good luck to you, but do be forewarned.

5-2 Diet is the only diet that I have lost weight with. It really works!!! It also dropped my blood pressure, I stopped taking my low dose medicine. Watch the movie, it also lowers IGF1 (helps heal the cells in body).

What video are you referencing?

My daughter Rosie and my best friend Sue have been doing the 5 and 2 for a while - both live in England. At first they found the hungry days difficult but have now got used to them. The two days are not consecutive so that is nice. They have both lost about 20 pounds and look fabulous and feel great too. I am so proud of Rosie as she was about 40 lbs overweight and at 5'5" she was pretty chunky. She looks soooooo much better and is full of energy and enjoying her new body! I weigh about 120 so don't need to do it but apparently they are finding all sort of other health benefits that are occurring like the excess fat round the heart is disappearing; I think that's what she said.

Yea! I started intermittent fasting several yrs ago after reading a book called, "Eat Stop Eat" by Brad Pilon. So this is nothing new to me. His book is based on his experience as a nutritionist for athletes. He suggested to stop eating at 6pm one evening and not eat til 6pm the next evening. Then you have fasted for 24 hrs. The health benefits are as amazing. I had more energy, and yes more mental clarity, and weight loss. Some people fast to detox their body. I want to point out that you don't have to fast for days. I fast every other day. Usually 3 days a wk and that's perfect for me. Remember Jesus' also fasted!

Intermittent fasting has become very popular for athletes especially for the recent finding that missing meals triggers the Pituitary gland to produce more Human Growth Hormone (HGH). This could potentially add yrs to one's life, as well as a big factor in quality of life.

In Islam it is recommended to fast every Monday and Thursday.

Hi this was common practice when I was a child due to religious and health reasons and is as old as time its self. I just love it when some one remembers what their elders or the ancients used to do and the benefits it brings about. Then wrap it up in a cover, add their name and end up in 'The New York Times' as 'The latest diet Guru???'

Think I'll go build an ark and go around screaming about 'Come the great flood!! ' Beware of rancid cellulite!! Maybe I might make the times as well!! Lol!!

Whatever, it's common sense that taking time out and resting your bodily functions will do you good. All work and no rest and play? it's all as natural to us as breathing. We are in a 'lack of common sense' crisis as much as anything else that's cascading amongst our species methinks sire.

Too much brain wash going on today about body image rather than a healthy body. 'You ain't nothing but a sin unless your thin???' Crap!!!

Rubens had it right Women should be voluptuous, healthy, and rounded and soft. I got the opposite problem due to ill health. I look like one of those dumb wits that bought in to the media brain was that 'thin is in??'' I am trying to put weight on and it's a real big struggle to maintain the weight I am and I eat 1000's of calories a day.

Whatever happened to a happy and healthy weight non diet but eating well? Stop believing the Media look where it got everyone with Allopathic MEDI-SIN? You wait until ALL so called 'Celebs' are obese what then? ''Eat until you can't walk?'' Aim for good health by nutrition and common sense. We all know what we need to know without making some one else rich with buying in to some new 'fad'?? This planet is ruled by 'fads' how sad.

Intermittent fasting does work. Andrea have your DNA tested-a simple inside cheek swab. You may find your propensity to gluten intolerance or celiac disease. Obese people that adhere to an ALL GRAIN ZERO diet (including rices, corn, dairy, soy, starchy veggies and starchy fruit) as those "proteins" are similar to gluten DO lose weight, and the very thin WILL gain weight. Please refer to websites: breakingtheviciouscycle.info, glutenfreesociety.org. Gluten affects every organ in the body. Read: Dr. Davis's book: Wheat Belly or a book called "Dangerous Grains" I forget the author. It is shockingly disturbing information. Hope this info is helpful to all. :))

I failed to retain the link but a naturopath testified on ihealthtube that in her practice all or almost all patients which were gluten intolerant responded very favorably to thorough and regular herbal parasite treatment.

Yes, I think the 5:2 diet really works. I personally know about 10 people here in Los Angeles are doing or have tried (and given up) the diet. I started it a few weeks ago. I find it easy to cut back to 500 calories 2 days a week. The trick is not to go to the gym on those 2 days! I made the mistake of going to a hot yoga class on one of my low calorie days and had to eat more that day. But I feel so much better on this diet! More energy, increased mental clarity. It's helping me eat better on the 5 days of higher calories too.

I have been on the 5:2 diet for 5 months now and I have lost 6 kg, slowly, very slowly and even took some time off the diet when I went on holidays. I feel it is a kind of plan I can sustain in the long term until I get to the weight I want to be at. I am so happy with it because I am a proponent of quality and traditional foods which include meat, raw milk, butter etc.. I feel my body benefits from those but of course, it was hard to lose weight Ha!

I had to get myself organised and have in the house the food I need for my "2" days. And I still provide my body with the optimum nutrition it needs. Brilliant!!!

I am not overweight but by dropping 10 lbs means I'd in a lower bmi band. 5:2 suits me - a modest breakfast then nothing other than calorie free liquids until 5-6 pm when I eat a mountain of vegetables with a little carbohydrate like a baked potato. I do not count calories as +/- 100 calories is not going to make much difference to this regime which has to become a way of life and it also reduces the stress of counting calories.

So far 4 lbs have melted away with no sign of gaunt cheeks, flat boobs etc and there's good news for males too, the weight drops off even quicker. My husband has lost 10 lbs but he had more to loose. On the calorie reduced days I make sure that I am extremely busy so that skipping lunch does not bother me.

This is the first time I have ever followed a "diet". I believe it is good to under eat occasionally even though I am not guilty of overeating ever!

I have intuitively done intermittent fasting for years...a meal at 11 am and another at 6 pm with no snacks. While this isn't calorie depravation per se, it has kept my weight in check for years. The minute I start adding additional meals or snacks, my weight goes up and I feel groggy all the time. I also do not get many colds, flu or any joint pain when I use this method of eating. It works!

I will defenitely try this out starting Monday; right after my birthday haha.

I have a heart problem, is it safe for me to try 5:2 diet or do I still need to consult my doctor?