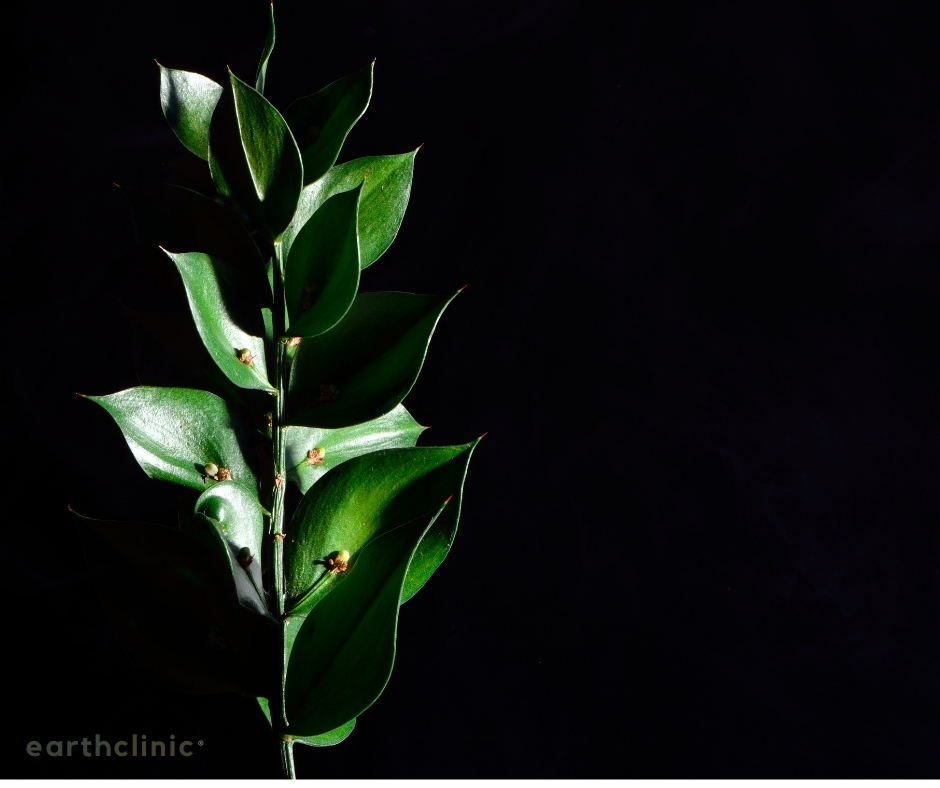 Even though the name Butcher's Broom (Ruscus aculeatus) conjures up interesting imagery, this herb is actually a small evergreen shrub found in Eastern Europe and parts of Africa.

Due to its strong and flexible branches, butchers in Western Europe used to bundle the branches together to clean up their chopping blocks, which is how it got its name.

However, butcher’s broom has been used in herbal formulas for thousands of years for its diuretic and blood vessel toning properties.

Tinctures and supplement capsules are made from the roots of the shrub.

Butcher's broom contains compounds rich in flavonoids and antioxidants that can help reduce the fragility of capillaries and strengthen blood vessels. In addition, according to one study, substances found in Butcher's Broom can stimulate receptors in the body known as alpha-adrenergic receptors. This causes your veins to constrict.

These compounds may be why butcher’s broom is linked to health benefits such as improved blood circulation and hemorrhoid treatment.

The herb is often used for the following health conditions:

Herbalists also use Butcher's Broom for conditions that require cleansing and diuretic effects, such as bladder infections and cellulite.

Pregnant women, young children, and those with liver or kidney disorders should use Butcher's Broom with caution.

Below are a few reviews from Earth Clinic readers on using butcher's broom for swollen feet, edema, varicose veins, restless leg syndrome, and recovering from a brain aneurysm.

I've been suffering off and on with swollen feet/ankles for many years. Most of the time it has passed within a short amount of time with little effort (such as drinking more water and elevating my legs/feet on pillows). Recently the swelling came on after being laid off from work for a couple months - spending too much time at my computer! I tried the pillows several times to no avail. Every time I put on shoes and took a walk to help circulation, the swelling in my feet would simply move up worse into my ankles. I researched online and in the many books I have for herbal remedies and came to the conclusion that Butcher's Broom was the most recommended of anything. I went and got some at my local natural food store and took the regular dose (two 500 mg) and within just a couple of hours, I realized I could once again see the veins on the tops of my feet and the swelling had reduced at least half. I could feel a huge difference and the relief -both physical and mental- was immense."

"I have been using Butchers Broom for months now. Unfortunately, I ran out of it and the edema came back. So I started taking it again and I have reduced swelling again. It works very well for me."

Posted by Cynthia (Grand Junction, Colorado) on 01/23/2008: "Two herbs, Horse Chestnut and Butchers Broom, have been very helpful to me -- they have taken away the sore, aching, tired feeling from my legs. I don't know if the *appearance* of my leg veins has improved or not. They seem less noticeable now, but I've gained a little weight on my legs, so there may be more fat hiding some veins now.

These 2 specific herbs have made such a difference to my quality of life.

Background: I started getting varicose veins, and the aching that goes with them when I was 16! Sixteen years old with varicose veins! And no, I wasn't pregnant, or obese.

The varicose veins just got worse over the decades. The aching, TIRED feeling bothered me more than how they looked. I usually wore jeans, slacks, or a long skirt to hide them. And I hate support hosiery. It's so uncomfortable, especially in summer.

A few years ago, I was reading some traditional, conservative woman's magazine, maybe it was Woman's Day or Ladies' Home Journal, but I can't remember. There was an article about several herbal remedies that actually have some scientific evidence for being effective. It said that the herbs Horse Chestnut and Butchers Broom were helpful for varicose veins. I tried the herbs. The local natural foods stores sell several brands of capsules with herbs in them. Affordable.

A couple of years ago, a doctor warned me not to take those herbs for a few days before planned surgery, and for a couple of weeks afterward. Doctors wisely are cautious about any herb or drug before surgery, that may or may not affect circulation or blood or the speed of bleeding and/or coagulation. Other than that, my physician does not object to the herbs.

The Horse Chestnut and Butchers Broom herbs have worked like a miracle for me, so I'm surprised that they are not well known."

Posted by Laurie (Seattle) on 07/16/2016: "Butcher's Broom helps with restless leg syndrome. Used to work in a vitamin store and customers loved it. Take the tincture or capsules twice a day."

First of all, I would like to thank Bill Thompson with all my heart for his fabulous help. He helped me in such a bad time in my life. I was hopeless at the time I asked for help and Bill really gave me great instruction. I still can't believe it is gone. I took an ounce of Colloidal Copper and 15 mg of zinc. To stop toxicity. I also took Butchers Broom. I did this for 6 months. After that, my doctor sent me to have a brain scan done with dye in it.

A few hours later the Tech who gave me the brain scan called me at home.

He said, "What was your reason for coming here?", I said "because I have a brain Aneurysm", He said, "Who told you that?"

He stood quietly for a little while and then said, "I think you better talk to your doctor."

Instead I went and picked up my x-rays of the brain scan and the report that came with it. It said, "Everything looks normal no evidence of a brain Aneurysm! " I was in shock and happy after having a party to say goodbye to all my friends..."

Do you take Butcher's Broom?  Please share your feedback with us!